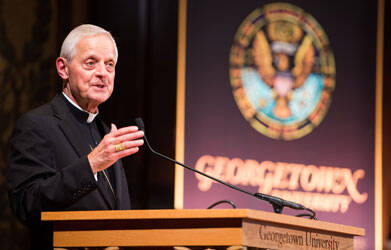 On Monday, Oct. 1, more than 700 students and Catholic leaders, interfaith partners and Washington insiders filled Gaston Hall at Georgetown University on a lovely autumn evening to discuss “the Francis Factor.” The event was the Inaugural Public Dialogue of our new Initiative on Catholic Social Thought and Public Life. In my upcoming column, I offer my own take on what impact Pope Francis may have on political life in Washington. However, it is worth sharing the Washington Post article by Melinda Henneberger, whose analysis and reporting on these matters is unusually thoughtful and provocative, and who captures well the encouraging spirit of the gathering:

But there’s both great hope and a lot of soul-searching and self-correction going on after the former Jorge Bergoglio’s constantly surprising first six months on the job; thanks to his simplicity, spontaneity, words and direct example, Catholics caught up in a left-vs.-right struggle that mirrored the secular culture instead of challenging it have been put on notice that all sorts of old categories and assumptions are no longer relevant. Though apparently open to reform, Francis has promised a consultative, go-slow process of discernment that does call to mind a certain president. Obviously, he has yet to fill in an awful lot of blanks.

Eventually, though, the measure of Francis won’t be how Catholics feel, but what believers do during his pontificate — about poverty, inequality and other core issues that in this country one political party pays lip service while the other cuts food stamps.

Could Francis really become, as Wuerl said in opening the evening, the “model of civility and service that a polarized and paralyzed Washington could learn from?”

In her story, Henneberger quotes the extraordinary reflections of Cardinal Donald Wuerl who came to bless and support the new Initiative. Cardinal Wuerl is obviously one of those who supported the election of Pope Francis and there is no sign of buyer’s remorse. He applauds a humble leader who is finding ways to preach and evangelize that pull people in instead of pushing them away:

Long before the curtain parted and Pope Francis stepped onto the balcony, huge crowds had already gathered in Saint Peter’s Square in response to the plumes of white smoke.  They were already chanting, “Viva il Papa! – Long Live the Pope!” even though they did not know who he was. Pope Francis stepped out onto that loggia as the living continuity and authentication of the Gospel imperative, that includes “See Christ in one another.”

What we have come to know and love in these rapidly passing six months is not a new Gospel, but a new way of doing the Gospel.  By what he does and how he does it, by what he says and how he says it, Pope Francis is offering a new moment of grace, outreach and renewal. The Holy Father is the New Evangelization in action, calling us to “go out” to people, to build bridges, not walls, and to establish a dialogue with all people, even those who do not embrace our faith in its fullness.

In the choice of the name Francis, we learned his priorities: concern for the poor, peace and creation. In his outreach to the poor and weak, his visits to the slums and his embrace of refugees and migrants, we see his passion for the poor and vulnerable. In his words about the global economy, his call for greater fairness and opportunities, even in his tweets, we see his call to pursue greater justice. In his prayer for peace and calls for dialogue, we see a global peacemaker, seeking to heal wounds and end conflict and violence.

This is not a political program or ideological agenda, but faith in action, the Gospel at work. Pope Francis is teaching us not only that we should know the Gospel, but how to “do” the Gospel. Pope Francis puts the person first, not in some abstract concern for all of humanity, but in a very real, intensely human way. He does not simply speak about immigration, but asks “who weeps” for the immigrants who have been lost, the fathers seeking work, the children living in the shadows. He does not simply speak of peace as an ideal, but he calls on leaders to choose dialogue over confrontation and asks us to pray, fast and act for peace.

He sees the Church’s defense of human life, family and religious freedom, not as separate agendas, but part of a larger vision of faith in Jesus Christ, hope for a better world and love for the weak and vulnerable. These are not banners to be waved, slogans to be chanted, but an integral part of a faith that reaches out to all, beginning with those on the fringe of society and the edge of life. He calls for a “new balance,” saying “the proposal of the Gospel must be simpler, profound, and radiant. It is from this proposition that the moral consequences then flow.”

Pope Francis is a model of civility and service that a polarized and paralyzed Washington could learn from and follow. With the leadership of Pope Francis, it is clear that this is the right time to inaugurate this Initiative as it seeks to lift up Catholic social thought and the tradition of our Church in order to share it with others. Our Holy Father has asked us to reach across boundaries of politics, ideology and sources of division to seek the common good, especially to protect and enhance the lives and dignity of those who are poor and vulnerable.

A video of the entire evening, including the quite substantive and occasionally humorous dialogue among PBS NewsHour Analysts David Brooks and Mark Shields and USCCB spokesperson Kim Daniels and Catholic foundation leader Alexia Kelley, is available below: