Lessons from Pope Francis' virtual audience with Catholics in the U.S. 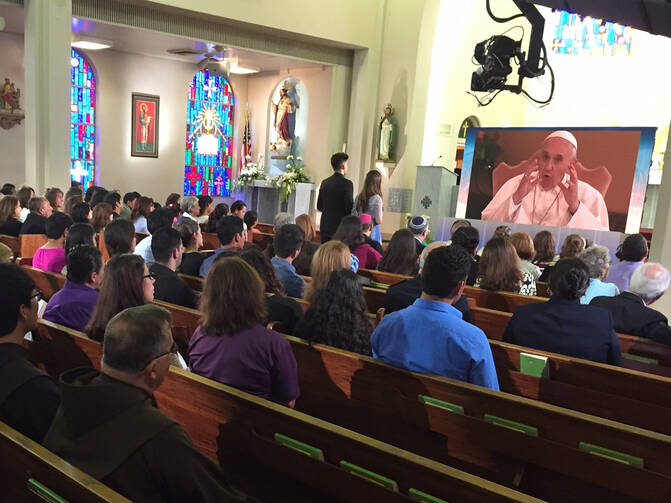 Here in the final week of August and close to Labor Day, many people are lingering over the last days of summer, others are getting a head start on a new school year or maybe beginning a new job.

In the case of Pope Francis, he is giving clear evidence of being “on the job” and readying himself for his American journey set to begin on September 19.

His televised virtual audience on ABC News’s 20/20 on Friday evening is a clear indication that the pope is not only prepared for the task ahead, but is also fine tuning his message of comfort and personal kindness that bespeak a “Shepherd of Souls.”

To my mind this broadcast had several important features that offer us a kind of "coming attractions" to the pope’s visit to our country.

First, Pope Francis's ability to speak English is better than we imagined. He more than holds his own in English, and both he and David Muir appear at ease. It also helped that David Muir is fluent in Spanish. Give it to ABC News: this may have helped land the interview.

Most of all, despite the issue of translation, the pope appeared to be deeply and emotionally connected to the participants in Chicago, Los Angeles and McAllen, Texas.

For example, the pope asks Valerie Herrera, a student at Chicago’s Christo Rey High School, to sing for him.

He adds: “Go on, you can do it. Be courageous!” And in the end he reminds his viewers to walk with in the company of others, not alone or lost or confused, rather together in community—with courage that gives joy.

How is Pope Francis able to converse and interact with such a diverse group of people?

For one, he’s the most accomplished parish priest to have been elected pope. He appears perfectly capable of running a youth group or parish sodality on his own terms.

Also, for this broadcast, the Vatican and the ABC News producers cleverly built upon the pope’s adept handling of crowds at his own “live and in person” weekly audiences in Rome. Consequently, the format of the virtual audience worked just fine.

What did not work was the long, long line of commercials that trivialized the importance of the broadcast itself. For example, a Sensodyne toothpaste advertisement in which a woman complained about not being able to drink “ice in my water.” Really? Contrast this to the life stories of “people on the periphery” who are homeless, hungry and living on the streets of Los Angeles, the very subjects of the broadcast.

The aspect of the production that has not been fully disclosed is how ABC News determined the sites in Chicago, Los Angeles and Texas. And how they developed the audiences ahead of time without going into the very specific detail that they were going to participate in a televised dialogue with the pope.

To my knowledge, only a select few of the audience members, those asking the questions, knew in advance that they would have the opportunity to speak to the pope.

I suspect that most of the audience members were told that the taping was for a “town meeting” that would be incorporated later into ABC News coverage—only to discover when they arrived at the taping that they were part of a virtual audience with the pope himself.

Well, that’s a showstopper, if there ever was one.

As someone who has worked in network television since the 1970’s and especially in the coverage of the popes, I was more than interested in how the broadcast came about.

We can assume that all of the American networks and other major media outlets requested an exclusive interview with the pope. ABC News agreed to a format comfortable for the pope, and, at the same time, created compelling television for the national audience.

When I asked a ABC public relations officer on Monday about the most basic production questions, it was only by Friday afternoon, a few hours before the national broadcast, that I received an email from ABC informing me that the details about the specific arrangements between the Vatican and ABC News would not be disclosed.

Few people within ABC News knew about the project, so for now it's a secret how ABC News obtained one of the biggest gets in news broadcasting, perhaps, in league with those reporters who attempted to interview the late Jackie Kennedy, and more often failed.

Overall, this experiment with a virtual audience says something more about the Vatican's newfound ability at strategic communication. The format worked well and may be helpful to future televised programs where the pope speaks on topics to specific audiences worldwide.

It’s noteworthy that the sites selected for this broadcast were in places in the United States where the pope will not travel on this trip. Perhaps the broadcast will undercut the criticism that his American tour will not go to California, or places west of the Mississippi.

Don Hewitt, the former producer of “60 Minutes,” once described television as a giant magnifying glass, that at times helps us to see into the personalities and even into the souls of people like Pope Francis.

At one point in the broadcast, Pope Francis called out to Sister Norma Pimentel who works with recently arrived immigrants in her border town of McAllen, Texas.

The pope’s sincerity, humility and broad smile were on full display when he thanked Sister Norma, and all women religious, for their good works. He added: “I love you all very much.” These words from Pope Francis, spoken with pitch-perfect gratitude toward women religious in the United States, will help heal the hurt, and frankly the bureaucratic mistakes, of past conflicts.

This broadcast of a virtual audience tells us something of the unaffected and genuine personality that is Pope Francis as he brings his own message, healing and blessings to our country, and our church.

Father Mike Russo is a retired professor of Communication and Media Studies at Saint Mary’s College of California, and writes the blog www.Francisfactor.com. He lives in Monterey, Calif. 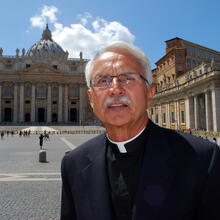 Mike Russo
Show Comments (
1
)
Comments are automatically closed two weeks after an article's initial publication. See our comments policy for more.
NICHOLAS SCHIAVONE
6 years 11 months ago
Dear America & Readers, ABC News & Pope Francis performed a miracle on TV & Online Friday night. Thanks to ABC News Professionals [@TomLlamasABC @marianaatencio @CeciliaVegaABC @DavidMuir @ABC] and the unnamed producers & directors in the control rooms, we saw the impact of special grace and superb television. Not since Peter Jennings, has ABC News touched so many at once in a unique multigenerational and multicultural way. [RIP: Peter Jennings] ABC News allowed us to see, hear and feel the most precious story in the lives of today's Faithful: a dialogue with the Holy Father, their precious Papa Francesco. Every child has uttered the heartfelt plea "Daddy/Mommy, Please tell me a story." ABC NEWS knew what to do and how to do it. It captured the Faithful's STORY-telling and the Pope's LISTENING "TOUCH." What a Blessing ABC NEWS gave to "Pope Francis & The People." The touching encounters. The teachable moments. Essentially, Television can be no better: Transmitting Real Blessed Life that is True, Beautiful and Good. Thank you, Father Michael Russo for illuminating this complex and wonderful story about Media, Religion & Faith. Sincerely, Nicholas P. Schiavone AMDG [Schiavone was Chief Research Officer for GE/NBC until '99. He designed NBC's modern Olympic Programming Philisophy with Dick Ebersol. Schiavone studied at two Jesuit Universities, Boston College & Fordham University.]