Pope and Late Evangelical Bishop were Like 'Father and Son' 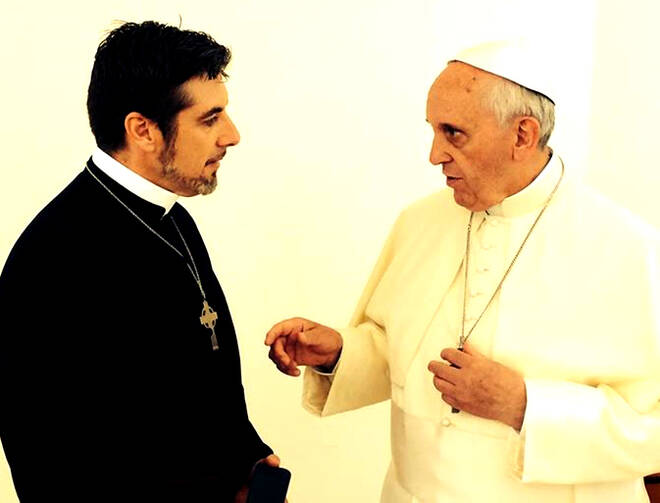 Bishop Tony Palmer, the evangelical preacher who befriended Pope Francis and died Sunday in England, was described today as a beloved pastor who was like a son to the pope.

Bishop David Scott, the Florida-based general secretary of the Communion of Evangelical Episcopal Churches (C.E.E.C.) to which Palmer belonged, told America in a telephone interview that Palmer had developed a deep paternal bond with then-Cardinal Jorge Bergoglio after meeting him on a mission trip to Argentina in 2008.

“They considered each other as ‘father’ and ‘son’ spiritually, long before Archbishop Bergoglio ascended to the papacy,” Bishop Scott told America. “That very close relationship was a paternal bonding between the two of them and I know His Holiness grieves with us for the passing of his son.”

Palmer, who died Sunday after a motorcycle accident, was a British-born South African prelate with the C.E.E.C., a Celtic-Anglican group that emerged from within the Anglican Communion in 1995 as part of the “Convergence Movement” of parishes seeking a middle ground of Anglican identity.

“He was very caring and loving,” Scott said of Palmer. “Was he a Catholic or C.E.E.C. bishop? I would say he was a bishop of the Church of God, one apostolic faith, one hope, one baptism. Tony had a very deep and abiding respect for the Catholic Church and the Catholic faith.”

At a denominational synod last October in Orlando, Scott noted that Palmer had shared some video from his recent street ministry on the Island of Capri.

“He was great at being a blessing to people on the streets and being a minister of love in a way that was very well-received,” Scott said. “You could see how deeply his presence was engraved in the hearts of people. He was a great example of leadership.”

Palmer’s message that ecumenical unity was already a fact of baptism, rather than just a theological puzzle to be worked out in official statements, was an approach that seemed to echo the sentiments of Pope Francis. In a June 25, 2013, article posted online at Revival Magazine, Palmer wrote in a reflection that unity depended primarily on what was in the hearts of individual believers—not on the institutional Christian church.

“No matter what doctrine we hold to, no matter what expression or denomination we adhere to, nothing supersedes the Lord’s call to oneness,” Palmer wrote.

Archbishop Charles Hill, a longtime friend and head of Ambassadors for Christ Ministries of America in Atlanta, said Palmer’s message had acquired remarkable influence in American evangelical circles in the past decade.

“During the last seven or eight years, he really captured the hearts of people in the United States,” Hill told America today in a telephone interview.

“He knew his gifts, but he didn’t flaunt them in a haughty way like some preachers do. Tony always kept his humility and I think that unique spirit is what opened a lot of doors for him, especially in his one-on-one relationship with the pope, which is something that most Christians want and will never have.”

Hill said Palmer’s unique spirit had brought Catholic, Protestant and Orthodox leaders together to discuss what united them—ending 40 years of fractured ecumenical dialogues that had often stalled over theological differences.

“Bishop Palmer was a very unique soul who just pulled all sorts of key people together at the same table,” Hill said. “He’s going to be missed because I don’t think anyone else had those gifts. His sole mission was to bring about unity in the body of Christ from all denominations and all walks of life. He was making tremendous progress.”

Hill was among the first to break the news of Palmer’s death in the United States yesterday, reporting on his Facebook page that Palmer had died after a motorcycle accident in Great Britain. Subsequent statements from Palmer’s community confirmed that he underwent surgery before dying in a hospital on Sunday, July 20.

During a January visit with Pope Francis at the Vatican, Palmer created an international sensation when he used his iPhone to record an impromptu greeting from the Holy Father to an American Pentecostal conference. In the video released publicly in February, Pope Francis told the Pentecostal gathering at Kenneth Copeland Ministries, “Let’s give each other a spiritual hug.”

Introducing the pope’s video at Copeland’s conference, Palmer told the group, “Brothers and sisters, Luther’s protest is over. Is yours?”

In the video, which went viral and inspired a number of Protestant responses, Pope Francis called Palmer “my brother bishop.”

"The Lord has used Tony’s many ministerial friendships across the globe to bring a new level of kingdom bonding among Evangelicals and Catholics," the posting stated. "His personal relationship with Pope Francis, Kenneth Copeland and other world Christian leaders has resulted in strengthening the brotherhood in the church and bringing glory to the Lord. He was instrumental in this call to unity and the impact of his faithfulness will be felt for generations to come."

Bishop Scott of the C.E.E.C., who was Palmer’s close friend and colleague, said Palmer regarded himself as “catholic” in a universal sense rather than in a Roman one.

“He felt as equally at home in the Roman Catholic community as in our community,” Scott told America. “I believe that was known and respected by Pope Francis.”

Scott expressed concern that Palmer, the denomination’s lead ecumenical officer who had brokered a series of meetings with Pope Francis, would be difficult to replace in upcoming dialogues.

“Our concern is that the vision not be lost,” Scott said. “Our hope is that nothing will change from the point of view of Pope Francis and the Vatican in regards to our coming discussions for Christian unity. But it’s going to be very difficult for us to find a person of Bishop Tony’s quality, character and diverse nature.”

Nevertheless, he added: “We’re more determined than before his death of achieving the goal of Christian unity and building bridges to the Christian world. What has begun with Tony and Pope Francis, and with the other charismatic evangelical leaders who have been with them, is fresh in our hearts.”

Bishop Scott added that it would take time for members of Palmer’s flock to grieve his loss, particularly due to the denomination’s smaller size.

“I think that’s part of the grieving process. When you lose someone, you grieve on so many different levels, and within a community like ours we’re a communion based on relationships. Our dioceses are not geographic, but relational, and relationships are very important to us. So losing him is a real blow to our hearts and to the organization.”

At the website of the Ark Community that Palmer founded, a statement today encouraged visitors to record messages of support and prayer for his wife and family in a special page at the site.

“We humbly ask that Tony’s family be given space to grieve at this incredibly difficult time but we encourage you to leave your condolences on this page for them the read as a source of encouragement and strength,” the website said.

Sean Salai
Show Comments (
6
)
Comments are automatically closed two weeks after an article's initial publication. See our comments policy for more.
Tim O'Leary
8 years 4 months ago
What a sad event, from a human point of view, I was fascinated by the video Tony Palmer shared with Kenneth Copeland's community earlier this year. He had a great way of getting beyond doctrinal differences and sharing the love of Jesus. May God reward him for his ecumenical efforts, which had an approach like the prayer services at Assisi that St. JPII the Great initiated during his papacy.
Franklyn BUSBY
8 years 4 months ago
Kenneth Copeland a "world Christian leader"? Does anyone at America fact-check before posting puff pieces like this? With no formal education (save a correspondence course on selling used cars) and accountable to no one, Copeland leads a gaggle of "clergy" that the Rev. Jeremiah A Wright Jr. charitably refers to as "prosperity pimps." Kenneth Copeland and his charlatan co-conspirators (Paul Crouch, Creflo Dollar, Jesse DuPlantis, Benny Hinn, Robert Tilton, Frederick Price, Rod Parsley, John Hagee, T. D. Jakes, et al) are all proponents of the so-called "prosperity gospel" (encapsulated in the phrase "name it and claim it" (or blab it and grab it)). And utterly in opposition to the message of Pope Francis. To name Pope Francis and the likes of Kenneth Copeland in the same sentence is an obscenity.
Tim O'Leary
8 years 4 months ago
Randell - you obviously have a different approach than Pope Francis, who actually reached out to Copeland via the iPhone interview. You sound a little like an offended Pharisee who saw Jesus talk kindly to prostitutes. I have no interest in the false theology of Copeland, Hinn, Hagee et al., and it is certainly far from Catholicism. But, maybe, you didn't see the video. Pope Francis was willing to put himself in the same place place with Copeland, so it is hardly an obscenity for this Journal to do the same.
Bruce Snowden
8 years 4 months ago
"But John answered and said, 'Master, we saw a man casting out devils in Thy name , and we forbade him, because he does not follow with us.' And Jesus said to him, 'Do not forbid him; for he who is not against you is for you." (Lk 9 vs 49-50.) Eternal rest be on Evangelical Bishop Tony Palmer, "like a son" to Pope Francis. And blessings on Pope Francis who was to Bishop Palmer, "like a Father." They were indeed Father and Son, one to the other, inspiring the Church to true Christian love in brotherhood/sisterhood as the case may be. "Go and do in like manner." Who said that?
Sean Salai, S.J.
8 years 4 months ago

Thanks everyone for reading. When I was interviewing people for this article, I was touched by the goodness of Tony Palmer that they recalled to me, and by his relationship with Pope Francis. Let's continue to pray for greater ecumenical understanding and for Bishop Palmer's family at this difficult time.

Gerard O'Flaherty
8 years 1 month ago
Dear Fr. Sean, Thank you for writing such a kind and informed article about my dear brother +Tony. We were ordained together and were very close. I can affirm the purity of his intent and the goodness of his heart. Now we all must assume the mantle of living the unity of our Baptism and in serving to build a culture of Christ's Reconciliation in our Communities and Society. From my heart I can affirm we are together in this.