The Police and the Priests 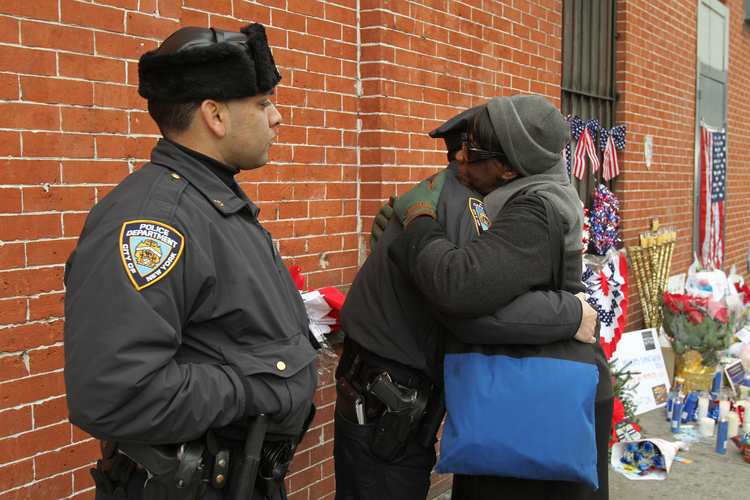 A Catholic sister I know, on her way to yet another street protest for police accountability, emailed me the other day with “an idea for a column,” as her subject line read. This crisis of racism in policing, she wrote, seems familiar. Could it be that there is some connection between prosecutors protecting killer police officers and bishops protecting abusive priests?

It’s a haunting idea—haunting to think that these two hugely powerful yet distinct institutions might have systemic problems in common. Even more haunting is the thought of how touchy partisans of either the cops or the church might respond to such an intimation. Yet the second I saw the sister’s brief suggestion, I couldn’t help but think that there is truth to it.

Am I missing something?

I turned to Twitter, posing the sister’s suggestion as a question. “I see it as a point of empathy,” replied Jason Welle, an editor at The Jesuit Post. “I know what it’s like to be part of a mistrusted group with accountability issues.” Grant Gallicho, an editor at Commonweal, added, “Large institutions have never been particularly good at self-policing.”

Here in New York City, the ties between the police and the priests are more than accidental; they are family. A century ago, as waves of poor Irish immigrants gained a foothold in the city’s institutions, it was the Catholic Church and the police that became their greatest strongholds. Though both the church and the police force have since become far more diverse, the effects of this legacy are still evident. The New York Times, in an article on the shifting traditions at NYPD funerals, noted the department’s Catholic history in contrast to its present-day rank-and-file.

“This department was a very Catholic department many years ago,” said Lt. Tony Giorgio, who, as the longtime leader of the department’s Ceremonial Unit, has orchestrated hundreds of funerals since the late 1980s.

“Over the years, we have had to diversify the unit, get to know these other religions,” he said. “We have to know those services. Sometimes they’re in Hebrew. Spanish. It could be an Asian language.”

Neither Wenjian Liu nor Rafael Ramos, the officers murdered by a lone gunman last month, were Catholic. Still, when I visited the sidewalk shrine marking where they died, just blocks from where I live, many of the memorials were votive candles and pictures of Archangel Michael.

Common problems can mean common responses. Let’s accept, for the sake of argument (and because I think it’s mostly true), that the leaders of neither institution actively want to harbor racist or pedophilic activity. Yet they do. To protect the institution as a whole, leaders have minimized the abuses of those under their charge. In many cases, they have also sought to silence criticism, to circle the wagons.

When power corrupts, we rarely turn to what might be the most obvious response: Reduce the power. Instead, politicians are flushing police departments with more money to buy more cameras and more weapons. Bishops responsible for harboring abusers win promotions to Rome, while pious culture warriors twist revelations of priestly abuse into ammunition for campaigns against sexual minorities.

The principle of subsidiarity suggests a different approach. A healthy society, it posits, is one that distributes power locally, that relies on central authority only when necessary. By this logic, Pope Francis has sought to bring about reform by decentralizing church power, rather than by further consolidating it behind his agenda. It’s an uncommon strategy for the secular and ecclesial political classes to take, but in many cases it’s the right one. Policing in the United States could stand to benefit from having fewer military weapons, fewer prisons to fill and more accountability to their communities. Our churches, too, would benefit from bishops with less feudal-style authority and more democratic-style accountability.

Since the killings of Liu and Ramos, New York police officers have begun a slowdown, severely reducing low-level stops and tickets, apparently in protest of what they consider a lack of support from Mayor Bill de Blasio. During the same period, crime in the city has actually declined. The main police union butting heads with the mayor called on officers to avoid arresting people “unless absolutely necessary.” Shouldn’t that be the policy anyway?

Nathan Schneider
@ntnsndr
Show Comments (
3
)
Comments are automatically closed two weeks after an article's initial publication. See our comments policy for more.
ed gleason
6 years 7 months ago
Both priests' and police use 'our Morale' as their guiding mantra to keep their 'system' going. . Maybe it's an Irish curse that has a unique transmission system that enables them to pass their values, methods and bias on to the non-Irish recruits. ....As was explained about the police in the Bonfire of the Vanities book.
Nathan Schneider
6 years 7 months ago

Thanks for the comment. I don't know about Irish curses, but it is pretty striking how much unquestioning support is demanded by professions that are supposed to be devoted to service.

"Only when necessary" misstates the principle of subsidiarity. In its basic formulation, it holds that social problems should be dealt with at the most immediate level consistent with their solution, not only when necessary.

The Church by its very nature is hierarchical (Lumen Gentium, Chapter 3). That means by divine institution (the use of the terms power and ecclesial political classes indicates marxist influenced analysis inappropriate to the Church) certain functions are inherently "top down", particularly teaching and governance. In addition these functions are not "social problems" but the proper functioning of a hierarchical Church.