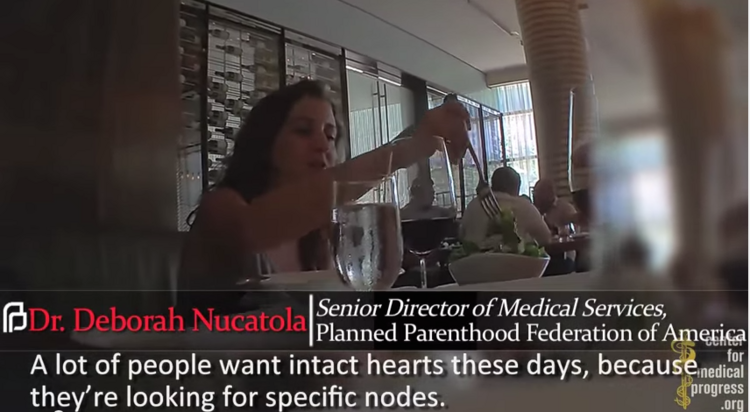 In the video, Dr. Nucatola calmly explains, while eating lunch, how a physician might manage an abortion procedure to maximize the opportunity to recover particularly desirable fetal tissue. For example, she says, “We’ve been very good at getting heart, lung, liver, because we know that, so I’m not gonna crush that part, I’m gonna basically crush below, I’m gonna crush above, and I’m gonna see if I can get it all intact.”

The video, embedded below, contains graphic descriptions of the process of abortion:

Currently the video is being covered primarily in the politically conservative press and among pro-life activist groups and sites, though the Washington Post has picked up on the story as well. One wonders, as America’s Kevin Clarke did with the Kermit Gosnell case in 2013, how thoroughly this news will be analyzed and discussed in mainstream media.

The video was released by the Center for Medical Progress, an organization which describes itself as “a group of citizen journalists dedicated to monitoring and reporting on medical ethics and advances”; founded in 2013, they appear to be making their debut with this video.  Planned Parenthood has criticized the video in a press release as “a heavily edited, secretly recorded videotape that falsely portrays Planned Parenthood’s participation in tissue donation programs.” Earlier similar undercover videos of Planned Parenthood employees released by Live Action, for which C.M.P.’s founder David Daleiden worked, have been criticized for selective editing that may have eliminated important context. After watching the video, however, it is difficult to imagine what context could possibly rescue Dr. Nucatola’s statements. (The full unedited video, which is almost three hours long, has also been posted on the same YouTube channel as the version discussed here.)

While the video describes what is happening as the “sale” of body parts and claims that this violates federal law, Planned Parenthood’s vice president of communications, Eric Ferrero, claims that no such sale actually occurs: “There is no financial benefit for tissue donation for either the patient or for Planned Parenthood. In some instances, actual costs, such as the cost to transport tissue to leading research centers, are reimbursed, which is standard across the medical field.”

Whether or not these practices violate federal laws regulating the sale of human tissue or prohibiting partial-birth abortion—and whether one is pro-life or pro-choice—what is described by Dr. Nucatola is indefensible. The issue is not only that fetal tissue is being procured from abortions, but that some of the medical details of the abortions themselves are being arranged in order to serve the purpose of supplying particular body parts of unborn children. Even if all the money changing hands is only reimbursing actual costs, as Planned Parenthood claims, these abortions are no longer purely about reproductive choice, but have become means to a larger and grislier end.

The implicit logic is, from a certain horrible perspective, consistent: if the fetus is going to be dismembered anyway, why not dismember it so as to make it as useful as possible for the presumably good ends of medical research? But most of us will quail before such consistency; most of us will pause, at least momentarily, at the thought that the destruction of a human body is being planned so carefully to use its parts for any goal whatsoever.

Even those who defend abortion as a necessary component of reproductive freedom should be horrified by the dispassionate discussion of how best to extract a fetus so that the head might be recovered intact:

And with the calvarium [braincase of the skull], in general, some people will actually try to change the presentation so that it’s not vertex, because when it’s vertex presentation, you never have enough dilation at the beginning of the case, unless you have real, huge amount of dilation to deliver an intact calvarium. So if you do it starting from the breech presentation, there’s dilation that happens as the case goes on, and often, the last, you can evacuate an intact calvarium at the end.

“You can evacuate an intact calvarium,” which is to say, a physician can remove an unborn child’s head without having to crush it first. The common etymological ancestry with Calvary, the Place of the Skull where the Romans had their own detailed procedures for reducing a body to death, seems less than accidental today.

Editor's note: After reviewing the much longer unedited footage, I've posted a fuller look at this story.

Sam Sawyer, S.J., is an associate editor at America.

Sam Sawyer, S.J.
@SSawyerSJ
Show Comments (
3
)
Comments are automatically closed two weeks after an article's initial publication. See our comments policy for more.
Andy Hodges
6 years 6 months ago
I have been questioned about the credibility of the Center for Medical Progress. How reliable is this group and what kind of response is appropriate for someone questioning the fact that the video appears to be edited?
Sam Sawyer, S.J.
6 years 6 months ago

Please see the update note and the link to a new post reviewing the unedited footage.