Loyola Chicago lives out the call of "Laudato Si'" 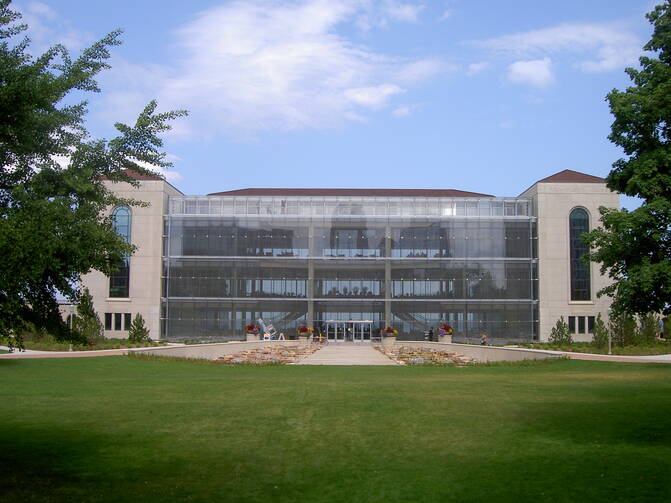 "We talk a lot about having solidarity with the poor, so let us pray for the people of Beijing who are enslaved to the environmental conditions here." I remember it was a particularly smoggy day, when I found myself attending Mass in the small Beijing apartment where a Jesuit offered this prayer.

So many Beijingers I got to know while studying abroad there are enslaved because they have no means to escape the dark haze that threatens their home and their health. I had those means; a few months later I was on a plane back to Chicago. A year later I'm reading Pope Francis' new encyclical, “Laudato Si’,” which has challenged me to remember how I'm connected to "the tragic effects of environmental degradation on the lives of the world's poorest" (No. 13). Some of the people who know those effects best are the people I shared a city with for a semester.

“Laudato Si’” is demanding in its call for introspection. What am I doing in response to our environmental catastrophe? The truth is, not much; but remembering my experience studying abroad reminded me that at least my university is.

Loyola University Chicago (of which, as of a month ago, I am a proud alum) is leading the way among universities in sustainable initiatives. The Sierra Club recently named the Jesuit university the fourth greenest in the country (other Jesuit schools, like Gonzaga, Regis, Seattle and others, are making strides as well). Michael Garanzini, S.J., Loyola’s president and C.E.O., says that its concern for environmental sustainability began 12 years ago, when the university was redesigning and expanding a significant portion of its campuses.

“At the time, there were lots of infrastructure projects, such as electrical, heating and cooling systems,” Garanzini said in an email. “We knew we should pay close attention to energy efficiency designs.”

Since then buildings and other new structures have been popping up at a swift pace.  I noted the annoyance that construction brought to navigating campus, but I didn’t notice that 11 of the new buildings were LEED certified. LEED certification is given to building projects that meet specific levels of sustainability in their usage and construction.

The most important of those buildings might be those that make up the Institute of Environmental Sustainability (IES). For me, the building was where I studied soteriology (maybe there’s some poetic justice there). While I knew that was where people who were passionate about ecology studied, I never focused on how it offered six majors and two minors in environmental programs, housed a greenhouse, a biodiesel lab and residence halls where students could learn how to live a sustainable life.

A main theme of “Laudato Si’” is “there is an interrelation between ecosystems and between the various spheres of social interaction,” including the economic decisions we make (No. 140). This is not lost on the Loyola community, who with nearly unanimous student, staff and faculty support sent a proposal to the board of trustees to divest from fossil fuel companies.

As a result, the board recently decided while not immediately divesting, to develop a more comprehensive approach to their investment portfolio to decide what other industries, in addition to fossil fuels, they might deem appropriate to divest from. A new protocol is expected this fall.

Even among all of Loyola’s efforts, there is a robust conversation in the community about how to do more, or, pursue the magis, in sustainability. While the university has committed to carbon neutrality by 2025, a student movement is pushing the university to achieve their goal by 2020.

“It is time for Loyola to follow Pope Francis' call to action and make a serious commitment to reduce our greenhouse gas emissions,” James Johnson, a graduate student in theology, wrote in an email. “It is time for us to practice what we preach.”

Nancy Tuchman, the founding director of IES at Loyola, believes its efforts are consistent with the university’s identity. “[Loyola] is a Jesuit University where social justice and care for the marginalized are central to our mission,” Tuchman wrote. “Climate change is a justice issue, and caring for the planet, reducing our carbon emissions and resource consumption are central to our responsibility as people who care for the poor and are stewards of the planet.”

Through its actions, Loyola has shown examples of how universities can commit to Francis’ call to care for our common home. My own lack of engagement and naïveté took Loyola’s extraordinary efforts for granted. While I was involved in other justice initiatives on campus, I found myself completely oblivious to what was being done for the environment. Pope Francis led me to look back with pride and gratitude on my alma mater’s commitment to sustainability. It’s also guided me to more critically examine my own, everyday choices.

Garanzini reminded me that it matters in even the smallest of those choices. “Today, we don’t choose plants or sidewalk pavers without asking what is best for the environment.”

Praised be to that.

Zac Davis is an editorial assistant at America.