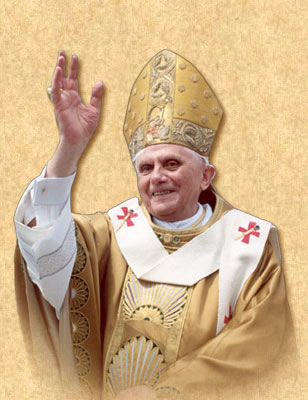 There's a lively discussion going on at Dotcommonweal on what the praise and critique of popes.  Initially, the Rev. Robert Imbelli, professor of theology at Boston College (and regular America book reviewer) posted an excerpt from what Fr. Imbelli found to be a "moving" talk by Pope Benedict XVI on the occasion of his becoming an honorary citizen of Freising.  The pope in a nostalgic talk said, in part: "At the seminary we were one family."  Freising, he said, “became a real homeland to us, and as a homeland it lives on in my heart."  Fr. Imbelli's post occasioned admiring comments.  "What a beautiful testimony," said one.  Another, commenting on the pope's paean to the cathedral in Freising, said: "Benedict should be given an honorary architectural degree. On his trips he rarely misses an opportunity to comment, often very astutely, about the buildings he encounters."

But Paul Baumann, editor of Commonweal made an unusual foray onto the site to point out something he found odd about  about the pope's words:

It was curious, at least to me, that Benedict spoke nostalgically of what was in fact a desperate and nightmarish time. One explanation for this, of course, must have been his relief that the war was over and the Nazis vanquished. Still, most of Germany lay in utter ruins, tens of millions of Germans were dead, and millions more forcibly displaced or imprisoned. Hundreds of thousands of German women had been raped. The Jews of Germany had been almost entirely exterminated. Yet the pope hints at little of this in his recollections of a somehow still pristine postwar Bavaria. Instead, and in familiar Ratzinger fashion, we get a paean to an idealized version of German village life–“of being part of a whole”–before the disruptions and depredations of our modern, technological age. Benedict’s admirers cast him as forward-looking, but that is hard to square with his ardent longing for the “old rite[s]” and venerable “homeland” of his German youth, and his determination to leave unmentioned the poisonous ethnic, cultural, and political hatreds that destroyed the world he idealizes. (Freising is but a stone’s throw from Dachau.) Benedict is a formidable theologian from whom all of us have a great deal to learn. Yet as a cultural critic, he has his blind spots....As pope, Benedict has expended much of his energy promoting traditional markers of European Catholic identity. Unfortunately, there are some very dark threads running through the Bavarian culture Benedict remembers so partially. Few of us are reliable historians when it comes to understanding the world that surrounded us in our youth. Popes are no exception.  --Baumann.

So what was going on?  Peter Steinfels had one answer:

Paul [Baumann]’s observation about Benedict’s weakness for an uncritical nostalgia about the church and culture of his Bavarian boyhood is salutary. It also points to something else that has long puzzled me: the near obsession with celebrating the pope—whatever pope—on the part of some Catholic intellectuals. I can understand the place of this kind of hero-worship on the part of people who have neither the leisure nor the formation for the kind of critical reflection that is the responsibility (and curse) of intellectuals. In the simplest dwellings around the world, including those of many of my forebears, there have been honored pictures of Pius IX, Pius XII, FDR, JFK, Martin Luther King, Jr., and now Obama. Fine. They are symbols of loyalty, gratitude, and hope, pure and simple. No more than the pictures of triumphant athletes that often hang alongside them does one expects them to call to mind the tragic failures, personal weaknesses, mixed political legacies, or aborted potential of such heroes.

When I find the equivalent of such pictures hanging in the minds of first-rate intellectuals, however, I cannot help but wonder. I confess that a great deal of reading in the very spotted history of the Left in the twentieth century has forced me to ponder the resemblance of papal adulation by some Catholic intellectuals to that of various Great Leaders from Lenin to Fidel to Mao by some left-wing intellectuals. When I once suggested this parallel out loud, my friend Jean Bethke Elshtain was appalled. Was I suggesting that John Paul II resembled Stalin? Of course not. Those who sang Stalin’s praises had to willfully blind themselves to many of his deeds, while those who sang John Paul’s praises had the very contrary at hand. Nonetheless, there seemed something disturbingly similar in this impulse, and not just in the case of John Paul “the Great,” to highlight and extol virtually every papal deed and statement while finding a way to deflect or ignore rebut almost all criticism.   --Steinfels

In other words, when does respect for the pope turn into papalotry?

Gregory Wolfe wonders about something else:

Catholic intellectuals should not be uncritical toward popes. Granted.  But what about the other side of the question? Is it possible to be so critical, so detached, that as Catholic intellectuals we lose some affectivity toward the bishop of Rome that we should have? How can criticism and loyalty, attachment and detachment, co-exist? And where do we turn to find the theological and spiritual resources to answer these questions.  --Wolfe

More seriously, these are important questions and the discussion on Dotcommonweal one to follow carefully.  Check it out.

James Martin, S.J.
@jamesmartinsj
Show Comments (
6
)
Comments are automatically closed two weeks after an article's initial publication. See our comments policy for more.
12 years 6 months ago
During this Year For Priests, Pope Benedict gives an elequent testimony to the priestly vocation in his address at Freising.  In paragraph #3, he recalls the date 1-3-46 , the start of seminary training as a turning point in life for him and his fellow seminarians.  Finally freed from the wretchedness of Naziism "We knew that Christ was stronger than tyranny, than the Nazi ideology and the mechanisms of oppression.  We knew that the time and the future belong to Christ and we knew that he had called us and that he needed us, that there was a need for us.  'We knew that the people of those changed times were waiting for us, they were waiting for priests to arrive with a new impetus of faith to build the houses of the living God."
I wish that every priest would read this speech and see himself in it.  Of course, we live in different times, but what Pope Benedict expressed of the faith, hope and service inherent in the priestly vocation is timeless.  I feel humbled and very grateful when I think about and pray for our pope and priests who have given their lives in service to Christ and his people.  I wouldn't call this papal adulation, but then again, I am Catholic, but not an intellectual!  I'll gladly leave the worrying about criticism vs loyalty or attachment vs. detachment to others and look forward to a continuing dialogue.
Ash Kuruvilla
12 years 6 months ago
Dear Fr. Martin,
Sorry my message is totally unrelated to the blog post here - actually i picked your book "My Life with the Saints" to read a couple of days back. I just wanted to tell you that it's awesome and i liked it so much. Keep up the good work :)
Best Regards,
Ash

Pearce Shea
12 years 6 months ago
As someone who was once entangled in academia, I can say that the sometimes purported myopia of our current Pope is something I dearly love. He is more than capable of writing a very deeply engaged encyclical on Nazism, he is more than up to talking about what it was like being in seminary when he was, but he doesn't do that unless its the task set before him. Academia, or at least much of it, is involved in a highly neurotic game of "gotcha." Talk about his time in seminary? No mention of Dachau? "Gotcha!" Mention of Dachau, but no mention of a thousand German women raped? "Gotcha!" The Pope is trying to write a pastoral bit here, not a tome on cultural criticism, but many of those out there with graduate degrees will fault him for it nonetheless.

david power
12 years 6 months ago
Credit where it is due.This is a wonderful article.It provokes thought in anybody who love Jesus and Peter.The humanity of Popes must be our daily bread,it is what we all share.The present Pope has struggled against the many forms of idolatry offered in the world that take our hearts from the love of the Lord.Now he finds himself as an object of scorn and worship or hyperdulia.The article covers both sides and quiete well the former.We must not place this Peter above the first Peter.He is capable of all sin and of rejecting the Lord and charged with feeding His sheep.He holds the keys,but they are fragile hands with which  he holds them.If his humanity does not speak to us ,nothing will.
Again ,wonderful article!
Gabriel Marcella
12 years 6 months ago
There are marvelous and eloquent reflections on B16. Let's add another. Don't we as human beings look back at our youth with nostalgia sprinkled with idealization? The pope isn't invulnerable to such proclivities. Janice, Peter, and David: you have it about right. Thanks for stating it so well!
CLAIRE BANGASSER MS
12 years 6 months ago
As I read your post, I realize that for Lent I need to look at the good sides of Benedict XVI. I seem to know his darker sides (from where I stand, a feminist Catholic) too well: this has to be unfair.
Thank you.