A Papal Mission for Jesuits: Dialogue and Discernment on the Frontiers

A Papal Mission for Jesuits: Dialogue and Discernment on the Frontiers 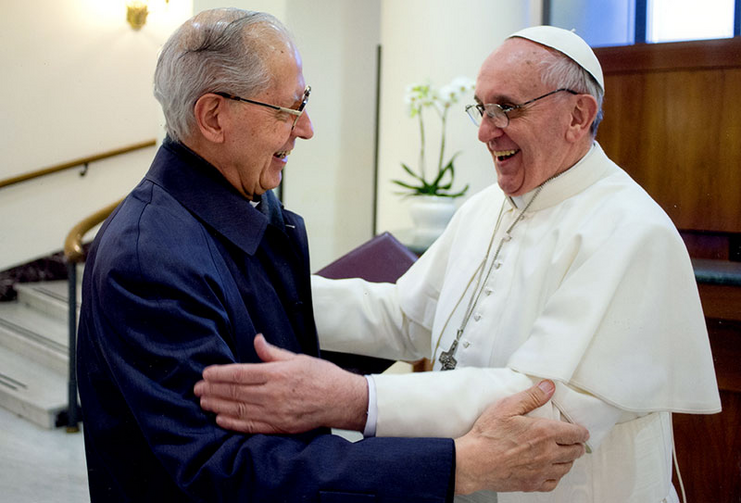 Heathrow Airport, London. I am in the airport again, this time on my way back to Boston after ten days in China – and soon enough I will post a third and final blog on that experience before my time-limited expertise runs out. (Here are the first and the second.) But I cannot resist commenting first on a recent report circulated (on Servizio Stampa - Gesuiti: Jesuits Around the World - June 2013), entitled “the Pope Meets ‘La Civiltà Cattolica,’” that is, the staff and community of an informative magazine that has had a Jesuit editor ever since its founding 163 years ago. The item we received begins: “On 14 June, Pope Francis received in audience the group of contributors to La Civiltà Cattolica, together with the Jesuit community, and their closest collaborators,” a traditional meeting that occurs early in a new Pope’s time in office.

What was for me the most interesting part of the summary report reads, in full: “In his reflection, the Pope dwelt on three words which would guide the future of the magazine, which he described as ‘unique, one of its kind.’ The first word is ‘dialogue:’ ‘your fidelity to the Church still needs to be uncompromising against the hypocrisies which result from the closed, the sick heart. Be uncompromising against this spiritual illness. But your main task is not to build walls, but to build bridges which establish dialogue with all peoples, even those who do not share the Christian faith.’ The second word is ‘discernment:’ ‘God is at work in the life of every person and every culture: the Spirit blows where He wills. Try to find out what God has done, and how He will continue his work. Study, sensitivity, and experience are needed to seek God in all things, in every field of knowledge, art, science, and political, social and economic life. But it is also important to keep the mind and the heart open, and to avoid the spiritual illness of referring everything according to oneself.’ The third word is ‘frontiers:’ ‘Your right place is at the frontiers. This is where Jesuits belong… Please,’ urged the Pope, ‘be men at the frontiers, with a trust and ability that comes from God. Do not fall into the temptation to domesticate frontiers. When you have to go to the frontiers, do not carry them back to your home, to gloss over them a bit, to tame them.’”

This is of course a fine message for all Catholics, Jesuits included. And even if Francis is not explicitly speaking of the interreligious realm, I found it timely for those of us engaged in comparative theological study and interreligious dialogue: dialogue, discernment, and frontiers. Wonderful summation just in these three words, particularly as Francis glosses them: dialogue — resisting the hypocrisies of closed-mindedness; discernment — seeking after God and God’s work everywhere, with a healthy openness that is not self-serving, the capture of souvenirs or trophies; dwelling on the frontiers — staying at the edge of things, in the uncertain and liminal spaces, refusing to domesticate the marginal and new by old and comforting platitudes.

Even when talking about or studying other religions or talking to people who belong to those traditions, we can remain grossly or subtly closed in on ourselves, repeating ourselves and managing not to learn anything that would actually change the Church. We can be tempted to seek God only as God is already known, seeking confirmation for the familiar, not risking the Spirit who “blows where he will.” And we can venture out for a momentary quick dialogue and quick opinions about millennia-long traditions, but then rush back home to talk about them comfortably among ourselves. Jesus kept going to the other towns, after all; staying on the edge is where we really belong, that edge where traditions meet and the certainties of Christendom do not have full sway even over us, much less people of other faiths.

But this is the example of Xavier and Ricci, de Nobili and Desideri, and a host of Jesuits around the world since then. It is wonderful, though, that a Pope, Jesuit or not, makes this a papal message for Jesuits and for the Church as a whole.

Show Comments (
1
)
Comments are automatically closed two weeks after an article's initial publication. See our comments policy for more.
Bruce Snowden
7 years 7 months ago
Fascinating! Kept thinking of the Gospel scene where the Apostles tried to "silence" (excommunicate) someone not of "their" company but doing good. Jesus said in effect, "Leave him alone! Open your eyes, put on your "listening ears." Must I tell you again my Spirit moves where it wills? Pay attention!" Are we listening? Well, Jesuit Pope Francis is listening and understands as do all faithful Jesuits who walk in the company of the Lord and rub shoulders within Jesus' society, I mean the people he pals around with. This makes Jesuits "Christ-like." How about Jesus? I have a feeling he's "Jesuit-like" and left that imprint on the Good News!