Archbishop Vincent Nichols, concluding this morning's hugely long and solemn ordination Mass, allowed himself an inpromptu remark. This was an "extraordinary moment", he told a packed congregation of 2,000 at Westminster Cathedral, adding: "This is how church history is made."

The liturgy was unexceptionally magnificent (Gloria by De Victoria, Elgar's Ave verum corpus, Newman's Praise to the Holiest in the Height), but it did feel historic. Not every ordination Mass begins with the announcement of the erection of a new ecclesiastical jurisdiction. And it's not normal for the ordinands' wives to come up to the Sanctuary with the new priests' vestments. And while this morning's three new priests -- John Broadhurst, Andrew Burnham and Keith Newton -- were not the first to have a past as Anglican bishops, there's never been three ordained together.

Archbishop Nichols began by reading out a message from the Prefect of the Congregation for the Doctrine of the Faith (CDF), Cardinal William Levada, announcing that it had published the Decree establishing the Personal Ordinariate of Our Lady of Walsingham, under the protection of the Blessed John Henry Newman, and that its head, or Ordinary, would be Keith Newton.  The establishment of the Ordinariate “marks a unique and historic moment in the life of the Catholic community in this country”, Cardinal Levada said.

The Vatican later issued a statement defining the Ordinariate as "a canonical structure that provides for corporate reunion in such a way that allows former Anglicans to enter full communion with the Catholic Church while preserving elements of their distinctive Anglican patrimony. With this structure, the Apostolic Constitution Anglicanorum coetibus seeks to balance on the one hand the concern to preserve the worthy Anglican liturgical, spiritual and pastoral traditions and, on the other hand, the concern that these groups and their clergy will be fully integrated into the Catholic Church."

Our Lady of Walsingham is a shrine in eastern England venerated by Catholics and Anglicans alike. On New Year's Day, three of the (Anglican) religious sisters of Walsingham were received as Catholics along with the three ex-bishops ordained today; this morning, they brought up the Gifts.

The Ordinariate opens a new chapter in the history of relations between the Catholic and Anglican Churches. The three former bishops ordained priests this morning will be the leaders of the new Ordinariate, shepherding in some 400-500 former Anglican lay people, including around 50 clergy, over the next few months.

In a lengthy homily packed with quotes from Cardinal Newman and Pope Benedict, Archbishop Nichols framed the Ordinariate as, in the Pope's words, a "prophetic gesture" which "is to contribute to the wider goal of visible unity between our two Churches by helping us to know in practice how our patrimonies of faith and living can strengthen each other in  our mission today."

In other words, if you want to know what eventual Anglican-Catholic unity will look like, have a look at the Ordina 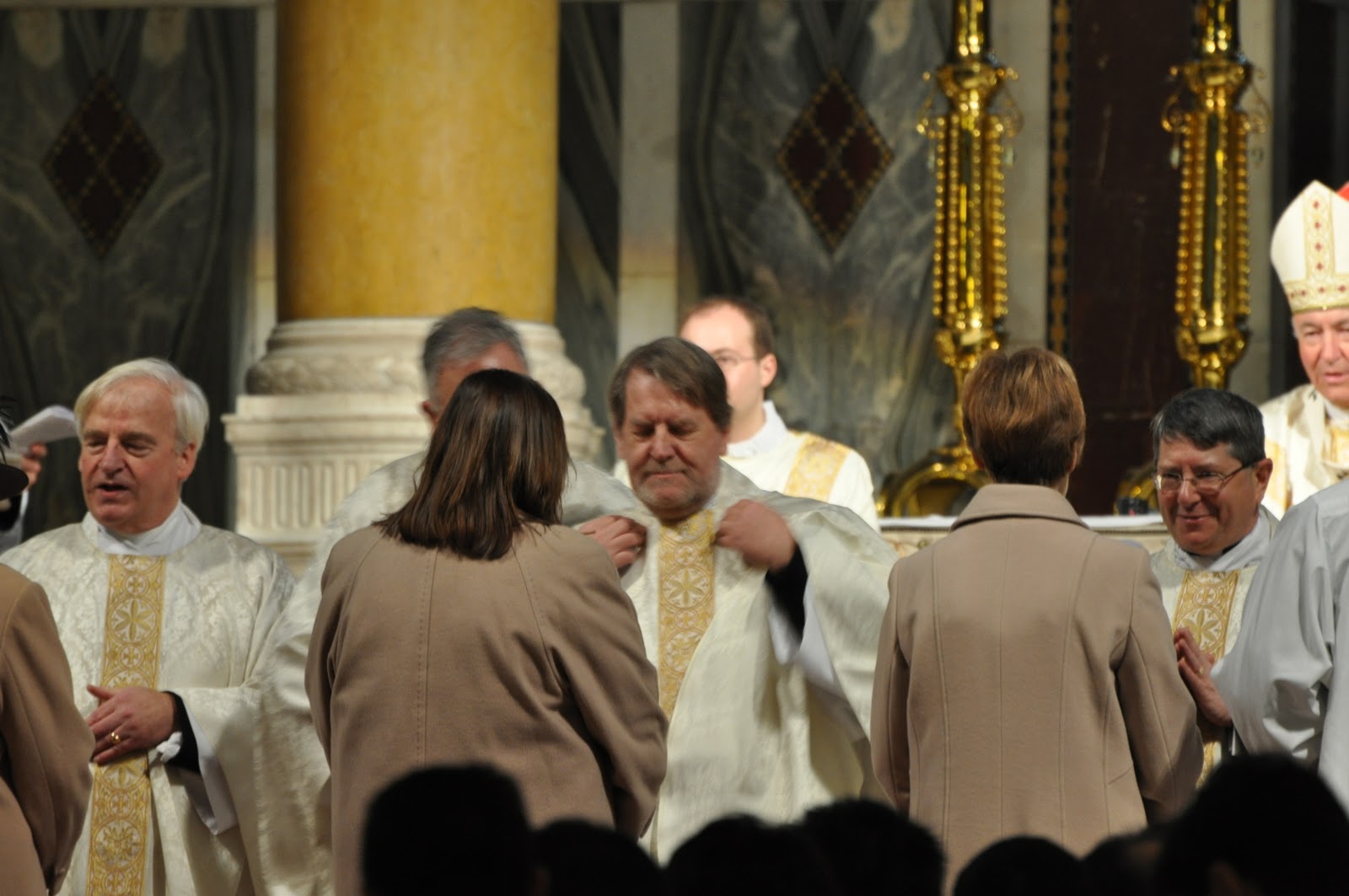 Quoting Pope Benedict's address on 20 December, the Archbishop noted that in Newman's time conversion to Catholicism required him to give up almost everything that was precious to him (possesions, profession, academic rank, family ties and friendship), leading him to complain that "As a Protestant, I felt my religion dreary, but not my life; but as a Catholic, my life dreary, not my religion."

The Ordinariate -- Archbisop Nichols did not say, but presumably meant -- would mean that that kind of sacrifice would not in future be necessary. But he did acknowledge that the journeys of the three to this moment had involved "painful misunderstandings, conflict and uncertainty" as well as "some sad parting of friends".

In a statement Fr Keith Newton, the head of the new Ordinariate, made clear that becoming Catholic was not a repudiation of his Anglican past. "I do not see my reception into the Catholic Church as a radical break but part of the on-going pilgrimage of faith which began at my baptism, " he said. "Since my teenage years I have longed and prayed for corporate unity with the Catholic Church and the publication of the Apostolic Constitution has offered the possibility of realising that dream."

Fr Newton also mentioned the support he had received from his wife Gill (who was received as a Catholic with him on New Year's Day) and the Archbishop of Canterbury, Rowan Williams.

The Catholic Church in England and Wales has been bending over backwards to avoid any hint of triumphalism in admitting the new converts. Anglicans are highly sensitive to overbearing or monolithic behaviour on the part of the Catholic Church: when the Ordinariate scheme was announced by Pope Benedict in November 2009, The Times described it as "parking Rome's tanks on Lambeth's lawn".

Archbishop Nichols drove away any notion of competition or rivalry between the two Churches when he spoke this morning of the woundedness of the Christian witness. "Our mission," he said, referring to the passage in John's Gospel when Jesus appears to his disciples bearing the marks of the Crucifixion, "is characterised by woundedness: a mission to a wounded world; a mission entrusted to a wounded Church, carried out by wounded disciples."

All three priests ordained this morning were formerly "flying bishops" in the Church of England, providing episcopal oversight to parishes which rejected the ordination of women. Because they are married -- a touching moment this morning was when their wives brought up the chasubles and stoles the Archbishop used to vest the new priests (see picture) -- they cannot be ordained as bishops in the Catholic Church. But the Ordinary, Fr Newton, will have equivalent status, sitting on the bishops' conference of England and Wales as a voting member.

Ordained as an Anglican priest in 1976, Fr Newton, 59, served in Malawi for six years in charge of the cathedral in Blantyre, before becoming vicar (1992) and dean (1995) in Bristol and canon (2000) of Bristol Cathedral. After his consecration as a bishop in 2002, he was the "flying bishop" for the Province of Canterbury in southern England.

It will be Fr Newton's task now to establish the first of a wholly new creature in the Catholic Church, the canonical equivalent of a genetically unique species, which is neither a uniate Church (defined by its rite) nor a personal prelature nor a military vicariate, even though it has some of the characteristics of each.

It is expected that, as the numbers of the new Ordinariate begins to swell after Easter (when hundreds will be received as Catholics), a church in central London will be entrusted to it. There, a Latin Rite Mass will be celebrated in the Anglican tradition, which any Catholic will be able to attend.

Will it take on a life of its own, attract hordes of Anglicans, help to reshape the Catholic Church in England and Wales, and change forever the nature of Anglican-Catholic relations? Or will it act as a temporary corridor for nervous former Anglicans, that will in time fade away?

Nobody knows. But the journey began today -- in a beautiful, solemn, warm liturgy that seemed to suggest all would be well.