The 'Obedience and Peace' of Angelo Roncalli

The 'Obedience and Peace' of Angelo Roncalli 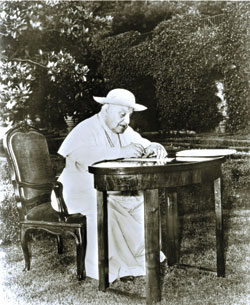 In 1895, a young boy from the Italian village of Sotto il Monte sat down and began to write. Nothing unusual about that—many youngsters get the inspiration to write about things they see. They grab a pen or a pencil (or in the cases of toddlers, crayons) and fill up reams of paper with the profound thoughts and scribbles that only children with a sense of wonder seem to have. Except that in this case, the youngster was a 14-year-old seminarian.

He was writing about things children of such a tender age usually don’t comprehend, much less think about: the things of heaven and of earth. He began his copybook with the ponderous title of “Rules of life to be observed by young men who wish to make progress in the life of piety and study.” There were admonitions to himself on how to behave toward others—and more importantly, toward God. In time, he wrote page after page of prayers, regulations and meditations that were to be adhered to with apostolic fervor.

He called the volume Il Giornale dell’Anima, or The Journal of a Soul. He was to write continuously from 1895 through 1962. That amounts to nearly 70 years of writing about his spiritual hopes, dreams and ambitions (if it is proper to call it that). Surely, he didn’t know what the future had in store for him. He was from farmer’s stock and the rigors and rhythms of life on the land were not foreign to him.

There wasn’t much money to speak in this family. When his devout and proud mother decided to assist her son’s vocation, she went among the relatives in the hopes of getting help for the family’s future priest. One day, when he came home from school, he found his mother at the kitchen table, crying. On the table were a few coins, amounting to no more than forty cents. He would have to get by on faith in Divine Providence and the love of his large family (of which he was one of fourteen). Angelo Giuseppe Roncalli would always keep this in mind and heart wherever he went in life, right up to the day he entered a conclave.

He was canonized along with Pope John Paul II on Mercy Sunday, by Pope Francis. It was seen as a tribute to two great churchmen, who, each in his own way, left an indelible imprint upon the church and in the pages of history. The majority of the news coverage was centered on John Paul II, while John XXIII (if he was mentioned at all) got a mere page or two pages in the frenzy of canonization coverage. The writer of The Journal of a Soul would likely have laughed the whole matter off as a contrived controversy, drummed up by media types trying to increase circulation and ratings.

There was, however, something missing when it came to coverage of John XXIII, something unique to his character that was overlooked by all those editors, journalists and media types. What they saw and highlighted were the liturgical ceremonies, the historical accomplishments, the encyclicals and pronouncements that obviously make up the life of a papacy. Remembrances of his very human outlook on things were well-recalled: the good humor and the kindness he exhibited were presented for all to see. But beneath all of that was something basic to the man that was obscured in the rush to ensconce him in marble, stone and bronze of fame and notoriety—and sainthood. It lies in his episcopal motto, Obedientia et pax—Obedience and Peace.

This three-word motto was the key to the seminarian, the priest, the bishop, the cardinal and the pope—and most importantly, to the human being underneath them all. This can clearly be seen throughout the pages of The Journal of a Soul. Though he wore the pontifical robes lightly, he took his responsibilities seriously. Loving God was his life’s work and he was often misunderstood, misrepresented and treated dismissively by some in the process of a long life. His career in the hierarchical church was not an easy one. When he spoke in earnest, there were those willing to twist his words for nefarious purposes. When he acted in simple charity, he was rebuked for seemingly acting ahead of his time—and more often than not, ahead of his superiors. Yet, he kept his vision focused on the Lord he was dedicated to serving. All of it was to be borne with a constant cheerfulness and a deep reservoir of goodwill. He did it all through obedience, through which he found a hard-earned serenity and, through that, peace.

On June 3, 1963, the feast of Pentecost, he died of stomach cancer at the age 81. “Good Pope John”—as he was called almost immediately after becoming pope—was mourned and loved by all the world, Catholic and non-Catholic alike. The pontiff who had so loved being with people died alone. It wasn’t deliberate: his faithful aides and family were in an adjoining room at the time, following on television the Mass that was being offered for him in St. Peter’s Square. He had died just when the words “Ita, missa est” (“The Mass is ended”) were intoned. The attending physician ran back into the bedchamber when he heard the dying gasp, and in tears, called the others in. They gathered one last time and prayed and then turned on all the lights throughout the papal apartments, by which time everyone in the square knew that a truly holy spirit had departed from their midst.

That was 51 years ago today, and in a church that thinks in terms of centuries and epochs, it is a mere yesterday. Pope John died just as the Second Vatican Council was getting underway, the Council he himself convoked, carefully nurtured and fervently prayed for. Indeed, on his deathbed, he offered up his suffering for the good of the Council. He knew that there were those who opposed this great initiative; indeed, there were those in the Curia, after his death, who, with “tight smiles” stood by, ready to put an end to it and bury it along with the pope. He wished this ecumenical Council would be a new “springtime for the Church” and his successor and others would carry forward what he had begun. That John XXIII should be remembered for Vatican II is right and just.

But we also shouldn’t forget the writer who “spent more than half a century of living pen in hand,” who lived the episcopal motto of “obedience and peace.” All those years ago, when he began writing that spiritual journal (which he said contained “his soul”), it was in the hope of working his way toward becoming a saint. Whether he realized it or not at the time, we do not know. But it was what he pursued through its pages and through the course of an eventful life. He conversed with God through his pen and his prayer and faced the world around him with a cheerful countenance. What was miraculous was that he made it all seem so simple. And maybe that is the secret to becoming a saint.

Joseph McAuley is an assitant editor at America.