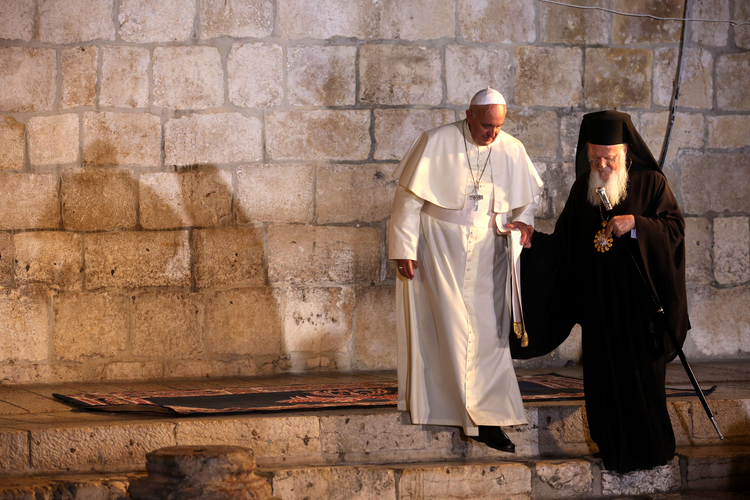 After returning to Istanbul from his meeting with Pope Francis in Jerusalem, Patriarch Bartholomew made the surprise announcement that the two of them had “agreed to leave as a legacy to ourselves and to our successors, to celebrate together a gathering in Nicea in 2025, after 17 centuries, the first truly ecumenical synod, where the Creed was first promulgated."

The patriarch’s statement, made in an interview with Asianews, gave rise immediately to all kinds of speculation and, in particular, to the idea that the pope and the patriarch were envisaging the holding of an ecumenical council in 2025 at which bishops from the churches of the East and the West would participate.

Though that idea is highly attractive from an ecumenical perspective, sources I contacted in Jerusalem and Rome consider the holding of an ecumenical council, with the participation of bishops from the churches of the East and the West, as unrealistic at the present time.

They drew attention to the fact that the patriarch actually spoke about “a gathering in Nicea”, without specifying further what this might entail. They believe that what is being talked about here is a joint commemoration of the first Council of Nicea, on the 1700th anniversary of that historic event, similar to the one held in Jerusalem recently for the 50th anniversary of the encounter between Pope Paul VI and Patriarch Athenagoras.

The Vatican has not issued a formal statement on the patriarch’s revelation, presumably because it emerged in a private conversation between him and the pope. But, pressed for clarification by journalists, Father Federico Lombardi, S.J., described Bartholomew’s idea as “very beautiful and significant”; he presented it as an agreement “to hold a joint commemoration of the first ecumenical council held in Nicea in 325 AD.” He recalled that Bartholomew was the first to propose the idea for the recent meeting in Jerusalem commemorating the historic encounter Patriarch Athenagoras and Pope Paul VI in 1964. He emphasized, however, that the patriarch actually spoke about “a gathering” at Nicea, and did not characterize it as an ecumenical council.

I asked the auxiliary bishop of the Latin Patriarchate in Jerusalem, Bishop William Shomali, if he could elaborate on Bartholomew’s statement. I presumed he might know since he had actually participated in the ecumenical celebration on May 26 in the basilica of the Holy Sepulcher in Jerusalem with the pope, the patriarch and the leaders of all the Christians Churches in the Holy Land, had dinner with them afterwards at the Latin Patriarchate and talked with many of them.

“It is the first time I hear about a gathering in Nicea in 2025. It was not discussed before. The Holy Father didn’t speak about it,” he told me, speaking from Jerusalem.

Learning that Patriarch Bartholomew broke the news in an interview with Asianews, Bishop Shomali, a Palestinian, said he is of the opinion that if such a meeting were to take place then “it would be a commemoration of the Council of Nicea, a simple commemoration like the one we had in Jerusalem on May 26, in memory of the historic encounter between Paul VI and Athenagoras some fifty years ago.”

Sources in Rome confirm that the Ecumenical Patriarch launched the idea of a common commemoration in 2025, but said there is no specific agenda for this yet. That’s hardly surprising, they add, given that the anniversary is still 11 years away and nobody knows where the Catholic-Orthodox dialogue will lead in the meantime.

Right now, they consider talk of an ecumenical council as wishful thinking given the fact that the Roman Catholic and Orthodox Churches are not yet at a point where they can declare that they are in full communion. But, they say, who knows what will have happened in the dialogue between the two sides by 2025?

Note: The Council of Nicea (modern day Iznik) was convened by the Emperor Constantine to affirm the Christian faith against the Arian crisis. Three hundred and eighteen fathers, from East and West, participated in that historic event from 16 June to 25 August 325, and Pope Sylvester sent a representative to it. Arius, a priest in Alexandria, denied the equality of the Son with the Father: the Son was understood to have been created in time by the Father and to have been used by him as his instrument for the creation of the world. The council in its Creed solemnly proclaimed the oneness in being (‘consubstantiality’) of the Son with the Father, and condemned the Arian errors. Arius died eleven years later. (See Neuner-Dupuis’ book on The Christian Faith: Doctrinal Documents of the Catholic Church).

PHOTO: Pope Francis walks with Ecumenical Patriarch Bartholomew of Constantinople at Jerusalem's Church of the Holy Sepulcher on May 25,

Gerard O’Connell
@gerryorome
Show Comments (
1
)
Comments are automatically closed two weeks after an article's initial publication. See our comments policy for more.
lori ranner
7 years 1 month ago
The city is spelled "Nicaea." As a Byzantinist, I note this mistake frequently!