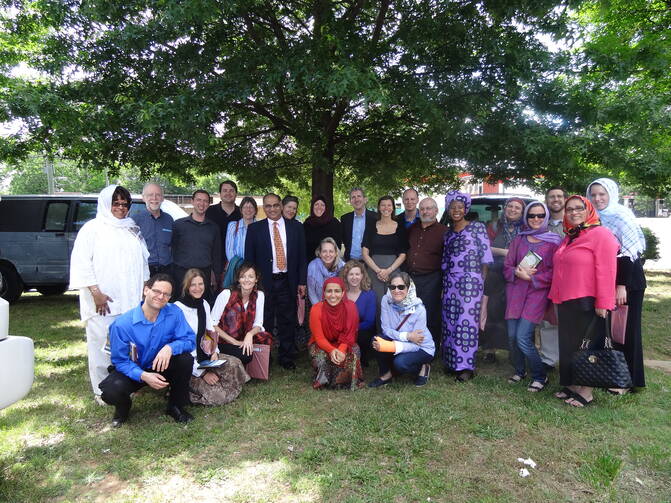 Miami, Florida. I am here for the annual meeting of the Catholic Theological Society of America, and contemplating also my departure for a 12-day trip to China on Monday. More on those events in other blogs. This blog is rather about a five year and just finished project sponsored by the American Academy of Religions – the largest grouping of religion scholars in the world – with generous support from the Luce Foundation: Summer Seminars on Theologies of Religious Pluralism and Comparative Theology. Three groups of professors from around the country and abroad have gathered, each cohort for two weeks, in consecutive summers, to reflect on issues related to theology, comparison, and pluralism in today’s world. I was on the teaching team for the entirety of the three groups over five years. (See one of my blogs on this from 2011)

This year’s session – the final summer of the final group – vividly emphasized for me how far we have advanced in recognizing and exploring issues related to pluralism, and how far we have to go. We might term this moment, to adapt a phrase from feminist discourse, “second wave” or “third wave” reflection on religious diversity: much has been accomplished, but new realities have come to the fore. The mostly junior scholars participating in the week-long discussion brought many issues to the fore, but the following stand out.

The phenomenon of “multiple religious belonging” is now deeply engrained in American culture. We can no longer imagine simply the prospect of well-established religions and their members deciding whether to dialogue or not. People, younger people in particular, find themselves in the position of having multiple religious attractions, and experiences and commitments which cannot easily be fit into any given religious system. For such people, it is unlikely that even upon ecclesial insistence they could give up strands of identity not easily reducible to a single tradition or church. A Church for “pure Catholics” will have fewer and fewer members. Related is the phenomenon of the “nones,” that growing category of young people who are, with respect to established religions, “none of the above;” many of these nones are generous and not selfish, socially committed and not narcissistic, open to cultural and spiritual values, yet without finding any established tradition meaningful or persuasive.

It is no surprise that the theology of religions (pondering from a Christian and Catholic perspective what to make of other religions and how they have (or lack) a saving role) and comparative theology (learning across religious boundaries with theological attentiveness and openness) are fields that are here to stay. This was abundantly clear throughout the years of the project. But also clear now is the weaving together of issues related to pluralism with a wide variety of other issues of religious concern: race and gender, post-colonial respect of non-Western cultures, learning from the “other” without disrespecting the other or using the wisdom of the other merely for one’s personal growth, and attention to spiritual practice and to theology implicit and at work outside the academy. While no one can do all of this, the ideal of a pristine conversation about pluralism or interreligious learning that leaves aside complex cultural and political concerns is now recognized as naïve.

At our meetings we all saw that lived religion, practiced in places of worship and in ordinary life, is necessary to the full understanding of any tradition. Thus we made it a feature of our meetings, when possible, to visit temples and mosques, sites of religious practice. Theology on its own is not enough, nor the reading of great texts. While the term “theology” ought not be broadened to include all religious thinking, neither can we assume that only theologians and Church leaders reflect on what is going on today. The best Catholic theology has always been alive to the life of the Church outside the scholar’s study and the classroom; yet often enough other religions have been studied with inadequate or no knowledge of the practices and living out of those religions, either in their home cultures or here in America. We now see much more clearly that one cannot simply read a book, but must also get out, visit, converse, listen and learn, in the community of that other religions. Getting involved, moreover, requires that we learn to speak to and with, and listen to and with, the members of other traditions.

It is perhaps surprising in light of these previous considerations that there was also evident, in our meetings, the resurgence of tradition and traditions: new attention to and use of Thomas Aquinas in teaching; new energy to show that the writings of the great Evangelical theologian Karl Barth, often thought to be a religious exclusivist, can be resources for interreligious theology today; reflection on and attention to how Islam, Hinduism, Buddhism, even in their traditional forms, are alive and well here in America, and relevant to rethinking our current religious and cultural pluralism.

Two concluding notes: First, it is not as if all our participants were astonishingly on the edge, outside ordinary categories and expectations. In fact, none of our participants fits simply or easily into any of the categories described above. Like any group of theologians and scholars of religion — this year, Jewish, Christian, Muslim, Buddhist – we to some extent share in the phenomena we study, but also more broadly care about issues that do not merely describe our own lives.

Second, none of the above was, in a very diverse religious context, purely Catholic reflection, but it is full of implications for the Church: the diversification and complication of religious lives; the growing number of people who have no intention of joining any religion; the complication of the theology of religion and dialogue by questions that cannot be set aside and will not go away, related to race, gender, and the array of concerns connected with gender; the need for theologians who would talk about other people’s religions to get out, to go and “visit” those traditions; the retrieval of tradition, but with no sense that we can ever go back to the way things used to be.

If we who are Catholic try to ignore the changing world in which any faith and any theology can exist, as if to settle issues simply among ourselves, we will simply become irrelevant; if we try to keep separate out the many issues that are intertwined today, as if we can decide the terms of discussion, we will simply be misunderstood and keep on misunderstanding each and every issue. And so all of us – leaders and theologians, specialists in one or another topic, Catholics concerned about the future of the Church in America — need to be talking to one another too, lest the compartmentalization of familiar fields make us all unable to deal with the emerging complexities. Divided, we will all fail even to understand the smaller portions of our current situation for which we feel responsible. We are not likely to be ahead of the wave, but at least we can ride it, religious and Christian and Catholic in our own times.

(By the way: this seems to be my 200th blog for In All Things since beginning in November 2008 – but who’s counting?)

Francis X. Clooney, S.J.
Show Comments (
5
)
Comments are automatically closed two weeks after an article's initial publication. See our comments policy for more.
Thomas Piatak
9 years 6 months ago
Jesus Christ was a "religious exclusivist:" “I am the way and the truth and the life. No one comes to the Father except through me." And He charged us with the duty of creating more "religious exclusivists:" "Go, therefore, and make disciples of all nations, baptizing them in the name of the Father, and of the Son, and of the Holy Spirit, teaching them to observe all that I have commanded you"
Jim McCrea
9 years 6 months ago
St. Augustine had this perspective, and the last time I looked, he is still a Doctor of the Church: “There are many people who the Church has but God does not have; and there are many people who God has which the Church does not have.”
Michael Barberi
9 years 6 months ago
Fr. Clooney, Thank you for an outstanding article. If I do no interpret your message correctly please let me know. IMO, this article is more about the message of God that the Catholic Church and other religions bring into the world and use as a spiritual guide for people of faith. The fact that we have a growing segment of the world that are "spiritual but not religious", and that many of us find some truth in other religions, should be a sign of hope for Catholics who live in a divided Church, where there is profound disagreement over many teachings (in particular sexual ethics) but also dissatisfaction with the message/instruction of how we are to grow spiritually and live a morally upright life. The knowledge of the growing plurality of religions is an opportunity to revisit and rethink not only the Catholic message but the medium, how we bring this message forward so that it becomes a clearer and more convincing understanding of the truth. If the RCC continues on its current course with its intransigent centralized Roman authority and does not become more open to a rethinking, and more accepting of the truth that may be revealed through other faiths and theologies, we will become irrelevant. This does not mean that we should contradict the fundamentals of our faith, but rather to recognize and embrace the fact that there is always a development in our understanding of truth that may not be completely visible within the walls of our Church but in the experiences and discussions of those of our brothers and sisters in other faiths inclusive of Religious, Christian, Catholic, Muslim, Buddhism or Hinduism.
Maria Davila
9 years 6 months ago
Thanks so much for this report, Frank. Thank you especially for this specific alliteration of "multiple belonging", which seems to be more and more the experience I am seeing in the classroom, and also feeling in my own religious life. I hope that your project and writing about it here and elsewhere make others in our tradition comfortable with the topic and able to consider what it may mean for current and future generations of Catholics.
Shawn Washington
9 years 5 months ago
When junior scholars are given a chance to be part of such diverse groups the experiences become varied. The groups would be able to know what exactly the current generation thinks, sees or wishes to happen.suit stand