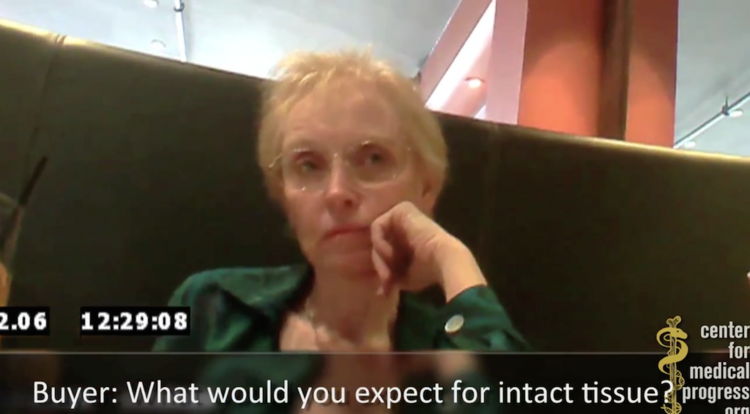 The Center for Medical Progress has released a second undercover sting video of a conversation with a Planned Parenthood official discussing arrangements and financial compensation for obtaining fetal organs and tissue from abortions. In this video, the haggling over the price-per-specimen is more blunt and obvious than in the first videos, as is the discussion of whether the actual technique used for an abortion can be modified to increase the chances of recovering intact tissue.

Before I go any further, I should make clear that I am not approaching this news from a neutral viewpoint: I am pro-life and oppose abortion; as a consequence, I also oppose Planned Parenthood as a major provider and advocate of abortion.

This story first broke last week, as C.M.P. made its public debut with their first undercover video in which Dr. Deborah Nucatola, the senior director of medical services for Planned Parenthood Federation of America, casually discussed over lunch how she might choose which parts of an unborn child’s body to crush in order to make sure she could recover the desired organs. I covered this story with two posts, the first looking at the short edited video that C.M.P was promoting and the second reviewing the much longer unedited footage and transcript they also released. (The full unedited footage of the second video can be found here, along with a transcript prepared by C.M.P.)

Watching these videos is gut-wrenching, particularly for someone who recognizes that the unborn child is a human being with inviolable dignity, deserving of our love, concern and protection. I hope that it is gut-wrenching even for those who defend abortion to hear how casually the dismemberment of unborn bodies is discussed, with no acknowledgement that their common humanity—the very thing that makes their tissues valuable—demands our compassion. It is disgusting to hear a physician attempt to establish the proper range of compensation for processing a “tissue donation” while joking that she “want[s] a Lamborghini.” To watch these videos at all is to acknowledge that there is something deeply wrong with the process of abortion as discussed here. Many of us know that that is because there is something deeply wrong with abortion, period. I pray that many more of us come to that realization.

While the videos are deeply troubling, and the P.P.F.A. representatives’ callousness in discussing how to obtain fetal tissue cannot be defended, the careful editing of the videos has provoked controversy of its own, some aspects of which are warranted. In the first video, C.M.P. accused P.P.F.A. of “selling baby parts”; they countered with a press release claiming that there was “no financial benefit for tissue donation for either the patient or for Planned Parenthood,” though in some instances the “actual costs” for processing the tissue was reimbursed. After reviewing the unedited footage of the first video, I argued that it was misleading for C.M.P. to describe what they uncovered as “sales,” particularly when paired side-by-side with citations to federal law which, while forbidding the sale of any human fetal tissue, makes allowance for the coverage of processing costs.

In the second video released today, Dr. Mary Gatter, president of the medical directors’ council of P.P.F.A., engages in a back-and-forth negotiation with the actor posing as a representative of a tissue procurement company, joking that “the person who throws out the figure first is at a loss,” but eventually suggesting that the expected “compensation” per specimen would be $75—to which the actor replies “really, that’s way too low.”

As with Dr. Nucatola in the first video, Dr. Gatter is concerned to make sure that her clinic not be seen as “selling” tissue, but only as helping to process tissue that women choose to donate after an abortion. However, in this video, it is much clearer that no real effort is being made to assess “actual costs” for processing that donation, but instead, the number reached is meant to be low enough not to raise eyebrows but high enough to make the clinic’s participation worthwhile. Unlike Dr. Nucatola, who reiterated several times that her primary interest was not in the money, Dr. Gatter says just once—even in the unedited footage—that “we’re not in it for the money, and we don’t want to be in a position of being accused of selling tissue.” In one of the lines edited out of the second video, Dr. Gatter responds to an actor’s suggestion that they could pay more for the clinic to modify the abortion procedure to one that would damage the tissue less by saying, “Well, now you’re shading into the area of you’re paying me to do something that’s not right.”

While neither of the videos clearly shows Planned Parenthood as primarily profit-driven, they both show that their concern for the law—and, more damning by far, their concern for the human remains of the aborted children in question—is far more technical than substantive. Both videos show that doctors who are at the top of P.P.F.A.’s medical hierarchy are more than willing—in fact almost eager—to discuss how both individual abortion procedures and the overall procedures of their clinics can be optimized to help obtain fetal tissue desired by the companies and presumably ultimately in demand from researchers. Neither of the videos show, even for a moment, any concern whatsoever for the fact that the fetal bodies being dismantled for parts are undeniably human bodies, which is in fact precisely what makes them valuable and desirable.

Official investigations into P.P.F.A.’s practices regarding fetal tissue donation—or perhaps “harvesting” might be the more appropriate term—are warranted. Those investigations are now getting started. I hope that they also grow to encompass the involvement of the tissue procurement companies and the researchers who are the ultimate source of demand for fetal tissue and organs. But above all, I hope that they encourage everyone to grapple more directly with the undeniable fact that what abortion destroys is an unborn human body, which has a value far greater than that of its liver or thymus or lungs.

Sam Sawyer, S.J. is an associate editor at America.

I raised the question above about whether or not they're actually making a profit, and acknowledged that covering costs is legal. I don't think it's possible for us to know whether or not there's any actual profit unless Planned Parenthood opens their books to an outside investigation.

But that's actually not the main point—the main point: is Planned Parenthood carefully determining how to dismantle the bodies of unborn children for parts, or not? I'm concerned about that even if they lose money.

Bill Mazzella
6 years 4 months ago
I am concerned because your weight is against PP and Not this guy who used unethical means to get information. None of which hurts PP except for the soundbite which politicians are using to attack and defund PP now. The woman is aggressively baiting the PP president to charge more. This is low life stuff. Secondly, why are you not as concerned when there is a miscarriage and the parts are thrown in the garbage? The anti-abortion movement has been quiet about this for decades. 3. Your doubting PP as to whether it is making money while you do not express a scintilla of criticism for CMP is curious to say the least.
Robert O'Connell
6 years 4 months ago
What ethic bars one private party from perpetratinng a sting against another? I ask not to argue the point but to understand your criticism of CMP and Fr. Sawyer,
Sam Sawyer, S.J.
6 years 4 months ago

From the post above: "I argued that it was misleading for C.M.P. to describe what they uncovered as 'sales,' particularly when paired side-by-side with citations to federal law which, while forbidding the sale of any human fetal tissue, makes allowance for the coverage of processing costs." There's much more extensive criticism in the second of my earlier posts on this issue, also linked above.

If I may, I notice that you don't seem to be expressing any criticism about the callous way the P.P. doctors are treating unborn human bodies as sources for parts. C.M.P.'s not above criticism, but neither should P.P. be. And on the scale of moral gravity, undercover sting videos and somewhat deceptive editing while also releasing full footage is far less serious than organ harvesting from unborn children.