The Mystery of the Shroud 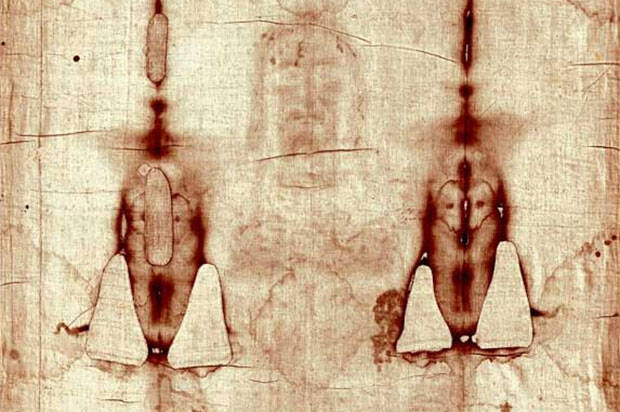 Today’s technology can do amazing things: phones take photos; cars park themselves. Yet, researchers still have not developed a device that can definitively pin down the origins of a famous image on a piece of cloth. The Shroud of Turin continues to puzzle many believers and scientists alike, and even major investigations have failed to provide a conclusion that satisfies everyone. From CNS:

Barrie Schwortz was the documenting photographer for the Shroud of Turin research project in 1978, an in-depth examination of what many people believe to be the burial cloth of Jesus.

Raised in an Orthodox Jewish home, "it took me a long time to come to terms with the fact that I'm a Jew and involved with probably the most important relic of Christianity," Schwortz told Catholic News Service.

"Isn't it funny how God always picks a Jew to be the messenger," he said.

Schwortz said that he, along with the other members of the research team who came from various faith backgrounds, had to set aside personal beliefs and focus on the shroud itself rather than any religious implication it might carry.

"We were there to gather information ... to do empirical science and do it to the best of our abilities," Schwortz said. "It doesn't have anything to do with my personal religious beliefs. It has to do with the truth....We could tell you what [the shroud is] not -- not a painting, not a photograph, not a scorch, not a rubbing -- but we know of no mechanism to this day that can make an image with the same chemical and physical properties as the image on the shroud."

Several experiments in 1988 used carbon testing to date the shroud to the 13th century, leading many to conclude that it is a fake. However, the latest study argues it's much older. Pope Francis, in his recent commentson the cloth, refrained from weighing in on its authenticity (although some noted his description of the image as an icon rather than a relic). Rather, he implied that the question of how it was made is less relevant than the question of why people still are drawn to it:

"How is it that the faithful, like you, pause before this icon of a man scourged and crucified? It is because the Man of the Shroud invites us to contemplate Jesus of Nazareth.... This disfigured face resembles all those faces of men and women marred by a life which does not respect their dignity, by war and violence which afflict the weakest… And yet, at the same time, the face in the Shroud conveys a great peace; this tortured body expresses a sovereign majesty."

The shroud, in part thanks to the debates surrounding its authenticity, is a reminder of the mysteries that remain within our faith, and the image upon it reminds viewers of the suffering that many have endured because of their faith. Schwortz sought the truth through science by putting aside his biases. In a similar spirit, we must be willing to let go of our own desires and beliefs as we seek the great truths of our faith through Christ. We must always be ready to put aside the assumptions we carry—our prejudices and personal biases—and to be open to the God of surprises and to greater truths, miraculous or not.

Kerry Weber
@Kerry_Weberweber@americamagazine.org
Show Comments (
5
)
Comments are automatically closed two weeks after an article's initial publication. See our comments policy for more.
JR Cosgrove
9 years 9 months ago
My wife and I and another couple went to see the Shroud in 1998. It was a very momentous experience to see such a thing. Prior to that and after I read quite a bit about it. I didn't see it above but the most complete website in the world is run by Barrie Schwortz. Here is the link http://www.shroud.com There is no way any human technology known today or especially in the 1300's could have made the image on the Shroud. Skeptics at the time said it was a painting and one bishop said he knew who did it. But it would have been the first anatomically correct painting of a human ever and the blood flow patterns indicate that it was wrapped around the body of a crucified man. One interesting thing is that supposedly the blood may contain DNA but no one is allowing an investigation into this. The Shroud is rarely exhibited but if you ever get a chance, make the trip to Turin and by all means read Barrie Schwortz's website.
Bill Collier
9 years 9 months ago
True that the DNA has not been analyzed as to its specific components, but the type of the blood on the Shroud has been determined to be Type AB. I've had an interest in the Shroud for approx. 35 years, and I've read many books and articles about it. It's the most studied artifact in all of human history, and the analysis of it has involved many disciplines--pathology, botany, textile science, photography, physics, anatomy, history, to name just a few. In addition to the Shroud of Turin website run by Barrie Schwortz and mentioned by JR Cosgrove, those new to the Shroud and its many mysteries might enjoy the books of Ian Wilson, who is arguably the best known writer about this fascinating cloth. In addition, the Shroud can be evaluated in conjunction with the analysis and history of the Sudarium of Oviedo, which is possibly the cloth used to cover Christ's head when He was lowered from the Cross and carried to the tomb. The cloth has no image, but the blood spots on it correlate with those found on the Shroud, and the Sudarium has a continuous provenance that is about 500 years older than that of the Shroud.
Bill Collier
9 years 9 months ago
Two further comments, if I may, and I'll then take my interest in the Shroud offline. :) First, the image on the Shroud is entirely a surface phenomenon, that is, the image was formed on only the uppermost fibrils in a given fiber. The formation has been compared to the scorching that a hot iron may cause on cloth, but the image actually appears to result from the denaturing of the cellulose in the fibrils as the result of a still unidentified electromagnetic process. Second, unlike a photograph or drawing or painting, the image on the Shroud has real 3-D quality, meaning that parts of the body that formed the image that touch the cloth (for example, the bridge of the nose) have greater image intensity than parts of the body that do not come in actual contact with the cloth (for example, the eye sockets). A 14th century forger would have to have had knowledge of creating a 3-D image of such subtle surface intensities that even the great artists of the Middle Ages lacked. And would a forger bother with trying to fool scientific sophisticates in the 21st century? Not likely IMO.
Carlos Del Sol
9 years 8 months ago
Just as Mary is merely incidental to our salvation through Jesus Christ, ( as though an envelope is more important than the message it carries), so we must not be distracted by "things" and "souvenirs." The shroud is a sideshow, further diluting the already weak message coming from our schlerotic Church. The Shroud has been mired in controversy for decades (centuries?), with various camps denouncing each other. The Church itself has botched every attempt to date this rag. It is really has been embarrassing to any rational Catholic. (I wonder if they may have Jesus' last roll of toilet paper somewhere in the Roman vaults, ready to be "revealed.") Hopefully, someday the Church will abandon its 14th Century perspective on faith and the faithful.
Steve Ackman
8 years ago
There certainly is a better way to phrase the objection. Start the abandonment of 14th century perspective with your own tendency to denounce.