Matteo Ricci: "The Master from the West" 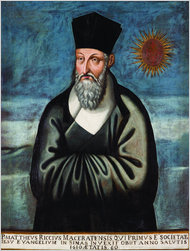 The editors of The New York Times evince something of a fascination for Matteo Ricci, the great Jesuit missionary to China.  As well they should!  The Italian Jesuit (1552-1610) was fascinating man living in a fascinating era who did fascinating things.  A few months ago, the Times ran this piece about a grand world map that Ricci created in the early 1600s.  Today the online edition of the Times features this thoughtful piece on the Renaissance man (in both senses) and, more specifically, on "The Master from the West," an exhibit that commemorates the 400th anniversary of the Jesuit's death, which has visited Beijing, Shanghai and Nanjing and Macao.  And, by the way, the piece has a great lede.

In early May of 1610, the renowned Italian missionary Matteo Ricci took to his bed in the small Beijing rectory he shared with his fellow Jesuits.

It was the Confucian exam season, when candidates from around China flocked to the capital to be tested, and Ricci had been besieged by visitors — sometimes 100 a day. The men who knocked unbidden were drawn by his knowledge of astronomy, mathematics, mechanics, philosophy, literature and rhetoric; the widely popular books he had written — in Chinese — including “On Friendship” and “Ten Discourses of a Strange Man”; his Chinese translation of Euclid’s “Geometry”; annotated maps of the world; deep knowledge of the Confucian classics; phenomenally trained memory — he could scan a list of 500 Chinese characters once and then recite it from memory — backwards — and, no doubt, his reputation for sincerity and modesty.

Ricci met them all — and reciprocated each visit within four days, as etiquette demanded. But his exhaustion was so extreme that he knew the end was near. As the sun set behind the Forbidden City on the evening of May 11, Ricci breathed his last.

“The Master From the West: An Exhibition Commemorating the 400th Anniversary of the Passing of Matteo Ricci” marks the Jesuit’s death by celebrating his remarkable life. Initiated by the Marche region of Italy, where Ricci was born in the hillside town of Macerata in 1552, the exhibition has been held in Beijing, Shanghai and Nanjing. It opened at the Macao Museum of Art on Aug. 7 — the day Ricci first landed there, then a Portuguese colony, 428 years ago — and runs through Oct. 31.

Rounding out the show’s treasures is a portrait of Ricci by a Macanese lay brother named You Wenhui — a.k.a. Emmanuele Pereira — drawn just after Ricci’s death when, it is recorded, those present “got on their knees, imploring [You] to make a likeness of [Ricci] that would be true to nature.”

The painting depicts a gray-bearded Ricci dressed in a tall hat and flowing robe with his arms hidden in the sleeves.

“The portrait of Ricci is very well authenticated,” said César Guillén-Nuñez, a research fellow at the Macao Ricci Institute. “It is Ricci in a state of bliss. It looks a lot like the portrait of a Chinese scholar.”

Ricci’s colleagues still faced the sad task of burying him. It was his desire to be interred in China — a privilege never before granted a missionary and rarely accorded any foreigner — because he believed it would strengthen Jesuit missionary efforts. His colleague Diego de Pantoia implored the emperor, “As in life we were nourished by your royal bounty, so in death we trust that you will grant us a clod of earth for a shroud.”

The emperor acceded and Ricci was buried in Beijing where his grave — a 1928 photograph of which is included in the exhibition — and those of his many successors, stands to this day in the Zhalan Cemetery on the grounds of the Beijing Administrative College, previously the Beijing Communist Party School. A sundial placed near his tomb has been lost, but the words inscribed on it — thought to be Ricci’s own — have survived:

“Time passes quickly. The past cannot be clung to; the future cannot be foreseen. We must do good in the present moment and not concern ourselves with useless things.”