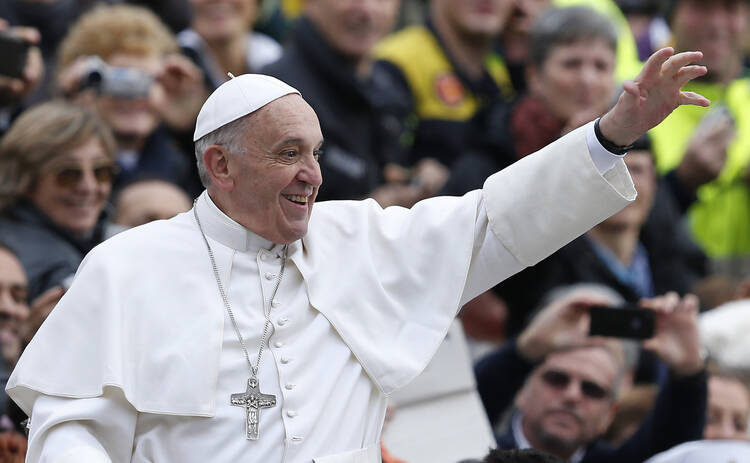 At the end of his life, ill and dying, St. Francis of Assisi told his fellow friars: “Let us begin, brothers, to serve the Lord God, for up until now we have done little or nothing.” His first biographer Thomas of Celano comments on the Saint’s exhortation: “[Francis] did not consider that he had already attained his goal, but tireless in pursuit of holy newness, he constantly hoped to begin again.”

In a way that echoes the spirit of his namesake, Pope Francis concludes his apostolic exhortation "Evangelii Gaudium" with a quote from the Book of Revelation that summarizes the spirit and goal of the whole text: “It is the Risen Christ who tells us, with a power that fills us with confidence and unshakeable hope: ‘Behold, I make all things new’” (Rev 21:5).

Pope Francis’ message is one of hope, optimism, inspiration and challenge for the church and the world. His exhortation is not simply a call for others to live a new way, but a call for even himself to be more open to change, to conversion: “Since I am called to put into practice what I ask of others, I too must think about a conversion of the papacy. It is my duty, as the Bishop of Rome, to be open to suggestions which can make the exercise of my ministry more faithful to the meaning which Jesus Christ wished to give it and to the present needs of evangelization.” The audience of this exhortation is not “you,” but “us” in the same way that Francis of Assisi said: “Let us begin…”

One of the things most striking to me about "Evangelii Gaudium is what Pope Francis says about the contemporary phrase “the new evangelization.” Rather than emphasizing that evangelization, as such, needs to be made new, he redirects our attention to ourselves as individuals and a church to see that we are the ones who need to be made new or, as the pope’s namesake said eight-hundred-years before, it is we who need to begin again to serve the Lord God. The message of the Gospel preached and lived, which is authentic evangelization, is to be adopted “in every activity which you undertake.” The newness is in our hearts, outlook and way of being in relationship with all we encounter.

This sense of “making all things new” unsettles the structures and institutions of the Church in a way that is refreshing and challenging. Pope Francis readily admits that, “There are ecclesial structures which can hamper efforts at evangelization, yet even good structures are only helpful when there is a life constantly driving, sustaining and assessing them.” Concerning pastoral ministry, Pope Francis sees that it too is in need of being made new: “The biggest problem is when the message we preach then seems identified with those secondary aspects which, important as they are, do not in and of themselves convey the heart of Christ’s message.” At the heart of what we preach with our words and deeds should be the Good News, the "Joy of the Gospel," present in the life, death and resurrection of Jesus Christ. With Christ as the model of service the tone and tenor of our ministry must change. “Pastoral ministry in a missionary style is not obsessed with the disjointed transmission of a multitude of doctrines to be insistently imposed.” Rather, pastoral ministry is rooted in the Gospel and focuses on the realities and circumstances of the whole Body of Christ, which includes those members who are suffering, poor and marginalized.

As individual Christians and as a community, we can become stagnant in our own faith, dead to the needs of others and blind to the realities that should call us to love, service and solidarity. It is for this reason that Pope Francis ties the life of spirit and joy of the Gospel to the “challenges of today’s world.” When it comes to identifying whom we should seek to encounter in the spirit of the Gospel, Pope Francis explains that the Church “has to go forth to everyone without exception.” He asks: To whom should we go first? And responds: “When we read the Gospel we find a clear indication: not so much our friends and wealthy neighbors, but above all the poor and the sick, those who are usually despised and overlooked.” Pope Francis is not really “making anything new” here, but calling us to “begin again,” to return to the truth of Christianity stating that, “there is an inseparable bond between our faith and the poor.”

The message at the core of "Evangelii Gaudium" is not so much “making all things new” in the sense of originality or creating novel enterprises, policies and doctrines. Instead, it is perhaps better understood as “making all Christians renewed.” It is a call for a renewal, a challenge to begin again, a true exhortation to remember what God has revealed to us most fully in Jesus Christ. And we can do none of those things without centering our hearts and lives on the Gospel and following in the footprints of the Lord with what we say, what we do and how we live.

As a final note about “making all things new,” Pope Francis humbly acknowledges early in the text that, “I am aware that nowadays documents do not arouse the same interest as in the past and that they are quickly forgotten.” While that might have been true before this week, maybe the Holy Father has succeeded in making at least one thing new: Genuine interest in and widespread enthusiasm for papal documents.

Daniel P. Horan, OFM, a columnist for America, is a Franciscan friar of Holy Name Province and the author of several books, including The Last Words of Jesus: A Meditation on Love and Suffering (2013).