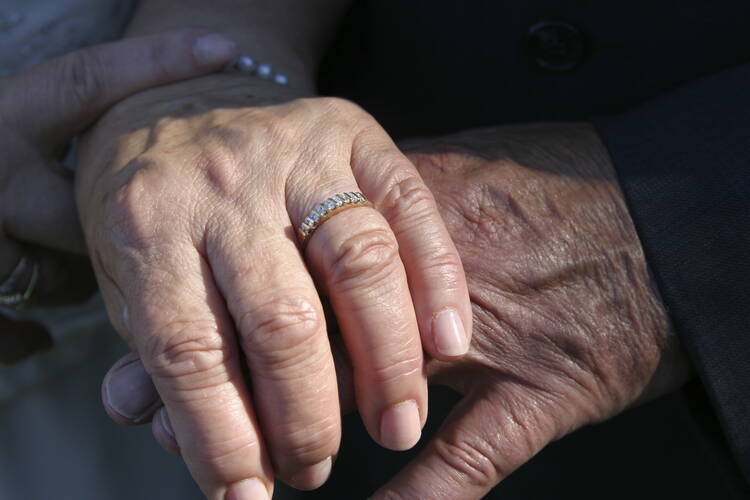 On Oct. 31, 2015, The New York Times told its readers, “Late-life divorce (also called ‘silver’ or ‘gray’ divorce) is becoming more common, and more acceptable. In 2014 people age 50 and above were twice as likely to go through a divorce than in 1990, according to the National Center for Family and Marriage Research at Bowling Green State University in Ohio. For those over 65, the increase was even higher.”

This story surely caught the eyes of Catholics who, now that the report of the Synod of Bishops is in the hands of Pope Francis, are waiting for a formal statement from the Holy Father on marriage and family life. The Bowling Green study was silent on the religious faith of those experiencing “silver divorce,” but there are certainly Catholics in that number. This prompts me to recall words of advice that the Catholic Church gave to its newlyweds at every church wedding prior to the Second Vatican Council.

As we all know, back then, the church used Latin as its official liturgical language. But English was used for an exhortation read in all churches in the United States at the beginning of the wedding ceremony. I will reproduce it in its entirety immediately below with the reminder that inclusive language was not common in those days, and “man” was often used to include both man and woman.

For a century before the 1960s, and perhaps even longer than that, every bride and groom about to exchange their marriage vows in a Catholic wedding heard the following words:

Beloved of Christ. You are about to enter upon a union which is most sacred and most serious. It is most sacred, because established by God Himself. By it, He gave to man a share in the greatest work of creation, the work of the continuation of the human race. And in this way He sanctified human love and enabled man and woman to help each other live as children of God, by sharing a common life under His fatherly care.

Because God himself is thus its author marriage is of its very nature a holy institution, requiring of those who enter into it a complete and unreserved giving of self. But Christ our Lord added to the holiness of marriage an even deeper meaning and a higher beauty. He referred to the love of marriage to describe His own love for His Church, that is for the people of God whom He redeemed by His own blood. And so He gave to Christians a new vision of what married life ought to be, a life of self-sacrificing love like His own. It is for this reason that His apostle, St. Paul, clearly states that marriage is now and for all time to be considered a great mystery, intimately bound up with the supernatural union of Christ and the Church, which union is also to be its pattern. This union, then, is most serious, because it will bind you together for life in a relationship so close and so intimate, that it will profoundly influence your whole future. That future, with its hopes and disappointments, its successes and its failures, its pleasures and its pains, its joys and its sorrows, is hidden from your eyes. You know that these elements are mingled in every life, and are to be expected in your own. And so not knowing what is before you, you take each other for better or for worse, for richer or for poorer, in sickness and in health, until death.

Truly, then, these words are most serious. It is a beautiful tribute to your undoubted faith in each other, that recognizing their full import, you are, nevertheless, so willing and ready to pronounce them. And because these words involve such solemn obligations, it is most fitting that you rest the security of your wedded life upon the great principle of self-sacrifice. And so you begin your married life by the voluntary and complete surrender of your individual lives in the interest of that deeper and wider life which you are to have in common. Henceforth you will belong entirely to each other; you will be one in mind, one in heart, and one in affections. And whatever sacrifices you may hereafter be required to make to preserve this mutual life, always make them generously. Sacrifice is usually difficult and irksome. Only love can make it easy, and perfect love can make it a joy. And when love is perfect, the sacrifice is complete. God so loved the world that He gave His only-begotten Son, and the Son so loved us that He gave Himself for our salvation. “Greater love than this no man has, that a man lay down his life for his friends.”

No greater blessing can come to your married life than pure conjugal love, loyal and true to the end. May, then, this love with which you join your hands and hearts today never fail, but grow deeper and stronger as the years go on. And if true love and the unselfish spirit of perfect sacrifice guide your every action, you can expect the greatest measure of earthly happiness that may be allotted to man in this vale of tears. The rest is in the hands of God. Nor will God be wanting to your needs; He will pledge you the life-long support of His graces in the holy sacrament which you are now going to receive.

During my years as pastor at Holy Trinity Catholic Church in the Georgetown section of Washington, D.C. (2000-03), I used this “exhortation” as preamble, preface and presupposition for our marriage preparation program that ran for six successive Thursday evenings about five times a year. Each couple was encouraged to pray and meditate over them, and to discuss them together in reflective moments before and after the wedding. The words that I underscored for them bear repeating today: “Rest the security of your wedded life upon the great principle of self-sacrifice…. Sacrifice is usually difficult and irksome. Only love can make it easy, and perfect love can make it a joy.”

The church in its age-old wisdom identifies love and sacrifice. If that identification is understood and lived by all who are blessed with a vocation to marriage, their happiness and the security of their wedded life will be assured. 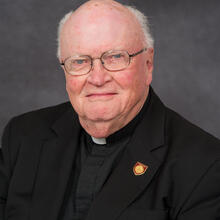 William J. Byron
Show Comments (
3
)
Comments are automatically closed two weeks after an article's initial publication. See our comments policy for more.
Bruce Snowden
6 years 8 months ago
"Love Assured." How sweet the memory! The marital exhortation used in the article is the very same one, word, for word, that was used at our wedding 48 years ago. My wife and I remember well the words, "Sacrifice is usually irksome, only love makes it easy, perfect love makes it a joy!" perfectly synthesizes Catholic marriage, all true marriage really. Marriage, or better, "love" or better yet "sacrifice" or more perfectly expressed "sacrificial love" is often synthesized in the strainer of reality, getting rid of inconsequentials, sometimes bruisingly, taut yet flexible, frequently, testing commitment. It solidifies marital love , through bouquets of personal successes and the grinders of personal failures as love deepens. If love doesn't deepen, something is terribly wrong! I wish our Bishops would make the exhortation mention mandatory at all Catholic marriages.
William Rydberg
6 years 8 months ago
Thank you for sharing this Mr Snowden...
Bruce Snowden
6 years 8 months ago
Thanks, Mr. Rydberg. Glad you understand and like it.