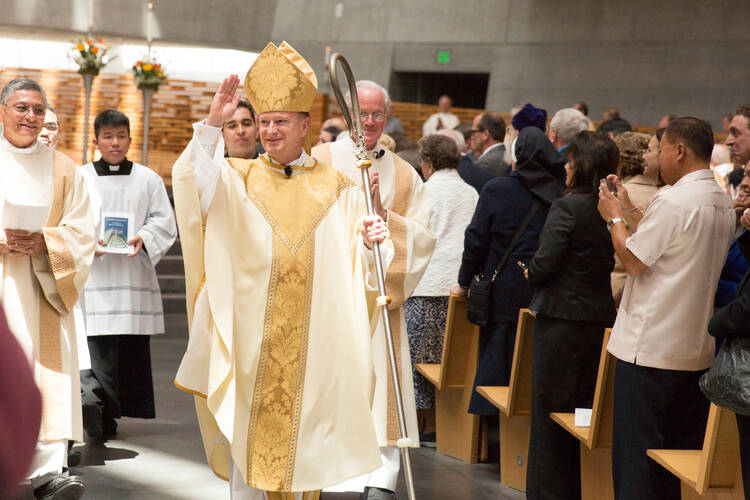 Bishop Michael C. Barber, S.J., is the fifth and current bishop of Oakland. He entered the Society of Jesus in 1973 and earned his B.A. in history and philosophy from Gonzaga University in 1978. He received M.Div and S.T.B. degrees from Regis College at the University of Toronto in 1985—also the year that Archbishop John Quinn ordained him to the priesthood in San Francisco—and an S.T.L. in Systematic Theology from the Gregorian University in Rome in 1989.

Bishop Barber has served at different times in his career as a high school teacher, a naval chaplain, a professor at St. Patrick Seminary in Menlo Park and a spiritual director at St. John’s Seminary in Boston. On May 3, 2013, Pope Francis called him from this last job to serve as bishop of the Diocese of Oakland. The first U.S. bishop appointed by Pope Francis, he was subsequently ordained to the episcopate on May 25 that same year.

On July 7, I interviewed Bishop Barber by email about “Laudato Si’” (“Praise Be to You”), the pope’s new encyclical on environmental stewardship.

Recent media reports have described “Laudato Si’” as a “message on climate change.” Would you add, correct or subtract anything in reference to this sound bite?

The encyclical is much more about the need for human beings to change than about climate change. It is about care for the earth, but not care for the earth “in isolation.” It talks about the relationship of human beings with God, the earth, and other human beings. Rupture of any one of these relationships is a sin. None of these things are new: Didn’t our mothers always tell us that wasting food is a sin? Pope Francis has articulated these concerns in a way that speaks to—and challenges—the whole world.

You serve as bishop in the Bay Area of northern California, where an ongoing drought threatens to exhaust the state’s water supply in the near future. Given this situation, why should the people of your diocese care about this new encyclical?

As a result of our serious drought, Governor Brown has asked for strict water rationing and conservation. Early results are very encouraging. People are saving even more water than the governor requested. There have been controversies over priorities. Some people complain that farmers are getting water, while their lawns go brown. Farmers are angry that water is being conserved for the “Delta smelt” fish which could be released for growing crops. California—one state—produces half the fruit, vegetables, meat and dairy products consumed in all 50 states. Our drought not only affects the availability of food for the nation and world, but also the price of food and the loss of thousands of jobs. I’m thinking not only of loss of jobs for U.S. residents, but the thousands of migrant workers that come here from other countries to help in the harvest.

To answer your question: The encyclical shows how the earth, climate and our ability to feed the human race in the U.S. and abroad, are connected. The encyclical calls us to see things in proper relationship: how my taking a “Navy shower” or not running the water whilst brushing my teeth can help farmers, farm workers and the production of food. Pope Francis also gives us criteria on how to balance various concerns. According to the pope, biodiversity and the preservations of species is a concern (those Delta smelt), which has to be held in tension with the need for the human race to be fed, and with the need for laborers to find work. We also have to ask the question: “Are our actions and lifestyle creating conditions which affect the lack of rain?”

People in my diocese, and in the other dioceses of California, should welcome the new encyclical, as we are feeling the effects of climate change sooner than most. Our actions in California regarding care for the earth affect the feeding of millions of people.

In this new document, Pope Francis echoes the growing concern of many people about climate change. How is that significant?

But it’s not about taking sides in this controversy. As a captain in the U.S. Navy, I see firsthand how climate change is a national security issue. But according to Pope Francis, climate change scientists cannot “declare victory” without seeing how climate is connected with the earth, and the earth with the human race, and how the human race and the earth are connected with God who created the whole universe.

On a personal level, what message do you take away from “Laudato Si’” that you would like to share with others?

I hope that as we become more aware of our responsibility to care for nature and the earth, we will also be moved to care more for our neighbors—especially the poor. Also, we need to apply the same “care for nature” to “care for the nature of the human body.” It is inconsistent to fight genetically modified wheat as “unnatural,” but be in favor of conceiving children in a petri dish. It is inconsistent to go to great lengths and expense to protect “Delta smelt fish” but not human embryos—human children—from experimentation. The pope makes these connections.

Some observers have interpreted the encyclical’s opening reference to St. Francis of Assisi as a nod to the Franciscan tradition, which St. Ignatius of Loyola also greatly esteemed. As a fellow Jesuit, do you see any Ignatian accents in the encyclical?

I think the encyclical is more Franciscan than Jesuit. St. Francis preached to the birds and fish when human beings refused to listen to him. He was so kind he tamed a wolf that was attacking children. St. Francis loved the earth so much, that out of humility he asked to be stripped of his habit, placed on the ground outside, and covered with a blanket so he could die in contact with mother poverty.

On the other hand, I see in the encyclical traces of St. Ignatius’s Spiritual Exercises, especially “The First Principle and Foundation.” Ignatius taught: “All the things on the earth are given to us in order to help us reach the end for which we are created.” And what is the end for which we are created? “To praise, reverence and serve God Our Lord.”

At the heart of “Laudato Si’” we find this question: “What kind of world do we want to leave to those who come after us, to children who are now growing up?” Pope Francis continues: “This question does not have to do with the environment alone and in isolation; the issue cannot be approached piecemeal.” This leads us to ask ourselves about the meaning of existence and its values at the base of social life: “What is the purpose of our life in this world? Why are we here? What is the goal of our work and all our efforts? What need does the earth have of us? Unless we struggle with these deeper issues, I do not believe that our concern for ecology will produce significant results” (No. 160f.).

I suppose my favorite “Jesuit” quote in the encyclical is: “A spirituality which fails to recognize Almighty God as Creator will provide no support as we end up worshipping other worldly powers, usurping the place of God, even to the point of claiming an unlimited right to trample his creation underfoot” (No. 75).

I applaud Pope Francis for his leadership on the care for the earth, and for showing how that care is connected with our relationships for each other and with God. Who else in the whole world has the “pulpit” to be a voice speaking out for the earth, the poor and for God?

Sean Salai
Show Comments (
1
)
Comments are automatically closed two weeks after an article's initial publication. See our comments policy for more.
Richard Murray
6 years 6 months ago
Here in the Oakland Diocese, Bishop Michael C. Barber, S.J., has been our shepherd for the last two years. We are lucky to have him with us. At a parish event several of us were speaking with him after he had given us a talk. He described how surprised he was when Pope Francis called him and asked/told him to be the next Bishop of Oakland. The good soon-to-be Bishop, then ‘Professor’ Barber, said that he couldn’t sleep for the next three days! He’s become beloved to the Diocese of Oakland in his short time with us. Here, his answers about Pope Francis’ new encyclical, Laudato Si’, are at once sensible and deep. Bishop Barber has powerfully understood the Pope’s message. It’s not merely about “the environment,” which is vitally important in itself, but about how we human persons live in a loving relationship with everyone and everything in Creation. A message of Christianity, a message of life.