Is Kim Davis a conscientious objector? 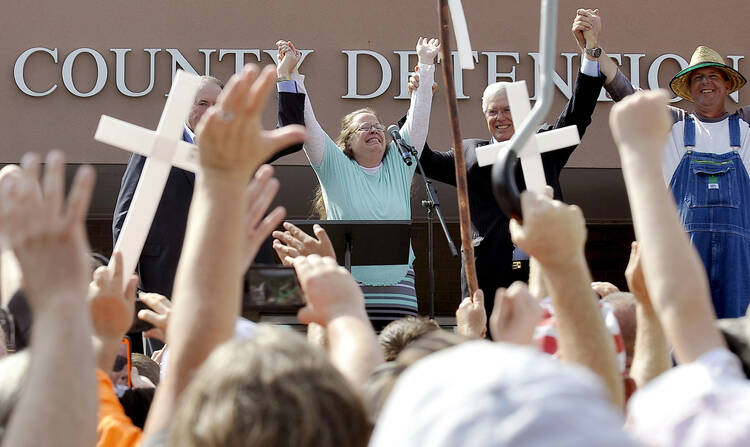 In light of the pope's brief meeting with Kim Davis—which the Vatican announced today was not an "endorsement" of her cause—Ellen Boegel explores what it means to be a conscientious objector.

A conscientious objector is defined by Congress as a person “who, by reason of religious training and belief, is conscientiously opposed to participation in war in any form.” Whether conscientious objection is limited to freedom from forced conscription or is a broader right, it nevertheless is limited to members of the public whose core beliefs or religious practices compel non-compliance with generally applicable laws. For example, in 1972, the Supreme Court upheld the conscientious objection of Amish parents to compulsory high school education, but, in 1982, rejected challenges to Social Security tax payments brought by Amish employers. The court acknowledged compliance with the law infringed on Amish religious practices, but denied the claim. According to the court, “When followers of a particular sect enter into commercial activity as a matter of choice, the limits they accept on their own conduct as a matter of conscience and faith are not to be superimposed on the statutory schemes which are binding on others in that activity.”

More recently, in the Hobby Lobby case, the Supreme Court upheld the power of legislatures to grant religious accommodations greater than those required by the constitution, but such exemptions may not operate to impose the objector’s religious faith on others. This is particularly true when the objector is a government agent.

Unlike conscripts, upon whom military duty is forced, Kim Davis actively sought the position of county clerk and is free to resign at any time without penalty. Her refusal to abide by a lawful court order and perform the responsibilities of her office does not meet the conscientious objector definition. Courageous conscientious objectors whose claims are denied engage in civil disobedience and bear the consequences. True believers, like Sophocles’ Antigone, welcome their punishment as it proves the righteousness of their claims. “But if I am to die before my time, I count that a gain: for when any one lives, as I do, compassed about with evils, can such a one find aught but gain in death?”

Ellen K. Boegel
Show Comments (
2
)
Comments are automatically closed two weeks after an article's initial publication. See our comments policy for more.
Chris Sullivan
7 years 4 months ago
I agree that conscious objection to military conscription, a right taught by the Church, is very different to the "right" to deny marriage liscences (which is not a right in Catholic theology because there is nothing against Catholic doctrine in 2 people of the same sex pledging to love and be faithful to each other for life, which is a good, holy, and sacred profession of committed love). But the Church does teach that we are all obliged to follow our conscience as Kim has done and Pope Francis has done us all a favour by insisting on that fundamental right on the plane. As John Allen has called for, an official Catholic clarification on conscience and its limits when it imposes on the rights of others would be very helpful. God bless
Henry George
7 years 1 month ago
Each person's conscience is part of what composes their most inner being. It is not for me to judge whether someone is truly a conscientious objector or not. I may disagree with their being adamantly opposed to a moral/political position but it is their conscience, not mine, that is apparently offended. If Ms. Davis finds it morally objectionable to register "Same Gender Marriages" how can we find fault with her decision ?