The legacy of Louis Brandeis, 100 years after his historic nomination 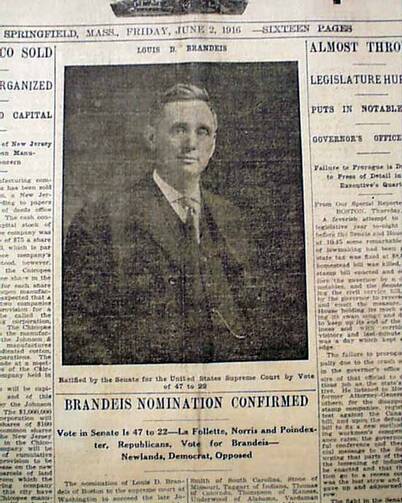 It was a simple form letter that President Woodrow Wilson filled out and sent to the United States Senate. “To the Senate of the United States: I nominate Louis D. Brandeis of Massachusetts to be Associate Justice of the Supreme Court of the United States, vice Joseph Rucker Lamar, deceased.” He signed it in his distinctive hand, and at the bottom left-hand corner, it read: “The White House, Washington, 28 January 1916.”

In nominating Louis Dembitz Brandeis to replace the deceased Associate Justice Joseph Rucker Lamar of Georgia (who had died on Jan. 2, 1916), President Woodrow Wilson ignited a firestorm of controversy.

The justice-designate had an impressive background and record. He was a famous lawyer. He was an advisor and supporter of the president who, when as governor of New Jersey, ran for and won the office he now held. The Brandeis worldview was simple: he was an avowed enemy of those who looked upon the common people with distaste and disdain, even though he himself was comfortably well-off. He placed himself on the side of those who were without power and influence; he believed that the poor, the immigrant and the downtrodden had rights that deserved to be respected. And he also believed that women had rights, too. He was the first to explain what was to become known as the “right to privacy.” He was a deeply learned man who had a social conscience and believed in the betterment of society.

He had entered Harvard Law School at the age of 18, and when he graduated in 1877, he had earned the highest honors in the law school’s history. (What made this unusual was that he achieved this distinction without ever having gone to college or university. Though he hadn’t reached the required age—21—for graduation, Harvard Corporation passed a resolution allowing him to receive his law degree.) And from there, his work and tireless efforts on behalf of human and civil rights earned him the title, “The People’s Lawyer.”

He lived in a time of foment and change; he lived in the “Progressive Era” and the term adequately described him. He fought against unjust laws and discrimination. He passionately believed in free speech; at the same time, he was equally passionate about fairness, whether it involved banking or insurance, wages and labor regulations, and of monopolies of any kind. In time, he would become renowned for the “Brandeis Brief,” whereby his marshalling of facts, reason and common sense in the service of his beliefs and his clients would come to serve as a model for future Supreme Court presentations. He was a model of judicial liberalism, a liberalism that comprised of both the theoretical with the practical. For Louis Brandeis, both were essential, not only in life, both also in law.

The man who became Justice Brandeis was born on the eve of the American Civil War, on Nov. 13, 1856. in Louisville, Ky. His lineage was of German Jews who had settled in a part of Kentucky that had a thriving Jewish community. Indeed, when the first Jewish congregation was created—in 1842—it was called Adath Israel and it was regarded by the Yiddish poet Israel Jacob Schwartz (a man who had arrived in New York from Lithuania and settled in Kentucky) as the “Jerusalem of the American South.” His father was a successful grain merchant and the family was upper class. But what was notable about young Louis was his love of learning. It was that love of learning that was to shape the man he was to become and the country he helped to create.

It is one of the ironies of history that a hundred years ago, a gifted man such as Louis Brandeis would be judged deficient because he was a son of immigrants and a member of a different faith. His was just another example of how in American history, one’s background and faith was cause to be considered suspect and arouse suspicion and distrust. Powerful forces were arrayed against him, from those in business, politics, and even his own legal profession. (In that category, he would be firmly opposed by a former president who himself would later become a Chief Justice—and colleague—William Howard Taft. And in a more personal irony—even some of his coreligionists were against him.) As America pointed out at the time, racism was “unhappily interjected” into the nomination proceedings (Chronicles, 2/5/1916). Bigotry was arrayed against Louis Brandeis and in his time he had to silently bear it in order to overcome it.

What would he think now, if he were to peer from atop that Supreme Court bench he had ascended to, and scan all those years of the past century since? He would see much that much has improved as far as civil rights and civil liberties are concerned. But he would also recognize that those achievements have become somewhat illusory; for he would realize that bigotry that plagued his day still exists, that immigrants and people of other faiths are still considered suspect and viewed with fear and scorn. And, in a presidential election year, he would see a time of momentous challenges, changes, worries, threats and scapegoating, like the presidential election year of his time when he was nominated for a supreme judicial post. And if he pondered it all from that bench, he might sadly conclude that not much has changed.

Louis Brandeis was a realist, of course. For he said: “Behind every argument is someone’s ignorance.” And, eerily, for our times: “We must make our choice. We may have democracy, or we may have wealth concentrated in the hands of a few, but we can’t have both.” But he was also an idealist: “If we would guide by the light of reason, we must let our minds be bold.” And to him, “the most important political office is that of the private citizen.”

He is remembered, quite rightly, for his enumeration of the belief in the “right to privacy.” He may well have been one of the very first to advocate such a belief. But on this 100th anniversary of his appointment to the Supreme Court, it may be better to recall the man himself, who was a son of immigrants and a member of a faith and heritage that was not adequately understood or appreciated. He stands as an example for the immigrant of today, especially for one of a different faith. He knew who he was and he didn’t let the limitations of others stop him from offering his services for the betterment of his fellow citizens. We must remember him for something more important and more personal: “the right to be.” That is his true legacy.

“May his memory be a blessing.”

Joseph McAuley
Show Comments (
2
)
Comments are automatically closed two weeks after an article's initial publication. See our comments policy for more.
Chuck Kotlarz
6 years 3 months ago
“We must make our choice. We may have democracy, or we may have wealth concentrated in the hands of a few, but we can’t have both.” The founding fathers also left no doubt that equality of citizenship was impossible in a nation where inequality of wealth remained the rule. Even the father of capitalism, Adam Smith, said, “No society can surely be flourishing and happy, of which the far greater part of the members is poor and miserable.”
William Rydberg
6 years 3 months ago
It's interesting that the Roe versus Wade decision cited the Right to Privacy as the reason why they declined to determine if the child in a mother's womb was a Person, in my opinion...