The Ironies of Wonder Woman 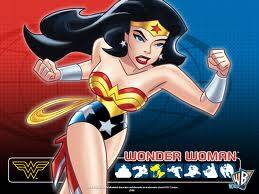 I saw, the other night, the world premiere of a brilliant and ironic new play, Lasso of Truth, by Carson Kreitzer, at the Marin Theatre Company. The play raises for us some of the subtle ironies behind the cartoon character, Wonder Woman and some of the vagaries of contemporary feminism. In it, a present day young woman is closing in on an ultra rare comic book, the first edition of Wonder Woman published in 1941. It is owned by a man who is reluctant either to sell it or let anyone read it without carefully washed hands and also wearing gloves. The young woman and man eventually become romantically involved.

The young woman, an admirer from her childhood of the feminist icon, Wonder Woman, is forced to untangle the knotty history behind the creator of Wonder Woman, William Moulton Marston, and his unorthodox and sexually complex family. Lasso of Truth was co-commissioned by the National New Play Network and is poised to receive productions at the Syncronicity Theatre in Atlanta and the Unicorn Theatre in Kansas City in the 2014-2015 season.

William Marston was a psychologist, inventor of the systolic blood pressure test which gave rise to the polygraph lie-detector and the creator of the cartoon character, Wonder Woman. As a psychologist, Marston argued that women were more honest and reliable than men. He posited that the masculine notion of freedom had strong anarchic and violent tendencies. The feminine notion of freedom, aligned with what he called 'Love Allure,' accepted and embodied an ideal state of submission. In point of fact, Marston originally got the idea for the systolic blood pressure test and for a woman superhero from his wife, Elizabeth Hodoway Marston.

Writing in a 1943 edition of The American Scholar, Marston gives us a sense of what led to the creation of Wonder Woman: "Not even girls want to be girls so long as our feminine archetype lacks force, strength and power. Not wanting to be girls, they don't want to be tender, submissive and peace-loving as good women are. Women's strong qualities have become despised because of their weakness. The obvious remedy is to create a feminine character with all the strength of Superman plus all the allure of a good and beautiful woman." Marston claimed that for men: "Give them an alluring woman stronger than themselves to submit to and they'll be proud to become her willing slaves."

Wonder Woman was a kind of amalgam of these two strong women, his wife and mistress (her physical appearance closely mirrored that of Olive Byrne). Marston convinced D.C.Comics to allow him to craft the cartoon character, Wonder Woman. Up to that point, superhero men (Superman, Batman) reigned supreme in comics. Wonder Woman had a 'lasso of truth' which made people tell the truth, a kind of perfect lie-detector. Moreover, the Wonder Woman series exhibited a lot of bondage—either Wonder Woman, herself, being bound by some enemy or some of her Amazon co-feminists binding one another and wrestling.

In the play, the young woman who so admired Wonder Woman as an archetype of feminism has to come to grips with the idea of a polyamorous creator of her feminist icon and the bondage theme (and love and freedom as essentially a kind of submission). She resists that origin myth for her childhood idol.

In the course of its long history as a cartoon, Wonder Woman, over time, played down some of her Superman-like qualities. Gloria Steinem put Wonder Woman on the cover of the first issue of Ms. Magazine but also resisted some of the ironic shadows in that early feminist icon. As the play goes on, Marston, always engrossed by the lie-detector theme, feels betrayed when he discovers that his wife and mistress enjoyed doing bondage on each other. Of course, there are always inherent problems with any lie-detector. The blood changes that may occur can only register evidence that the person taking the lie-detector is not telling the truth as they conceive it. Naturally enough, the truth as we conceive it is subjective. We may believe that something that is not true is so. So, a lie-detector can never tell us what is really the truth. Moreover, we know that some psychopaths may be so convinced of a falsehood that for them it is the truth. The polygraph would not register this. People can actually be trained to counter-act and thwart the impact of a polygraph.

Another difficulty with Wonder Woman as the ultimate feminine icon is that she has to embody "all of the strength of Superman" with "all the allure of a good and beautiful woman." The icon, so Marston states it, "wants to be tender, submissive, peace-loving as good women are." Many feminists after the 1970s began to see that the desire to be and have it all, with absolutely no sacrifices or submissions, is an unrealistic goal for either a woman or a man. In the play, the young woman berates the owner of the original Wonder Woman comic for living entirely in a binary world (women as Madonna or whore; patriarchy versus matriarchy). She espouses instead an ideal of equality between the genders. Yet, as the play progresses, it is obvious that such an ideal is easier stated than embodied or lived.

Lasso of Truth—brilliantly set with background cartoons projected on a wall and some videos of a Gloria Steinem espousal of feminism (which makes the story seem often as much a kind of comic book as a play) and brilliantly acted—has a lot to say about where we are today in regard to gender. It reminds us of the ups and downs of feminism from the World War II period which gave us Rosie the Riveter and Wonder Woman to the eclipse of feminism in the 1950s. Again, the feminist mystique of the 1970s fell away somewhat in the 1980s and 1990s. The play reminds us how far we have come toward equality and how much further we have to go. Perhaps, it forces us to look again very carefully at what constitutes a masculine and a feminine ego and how they can be both equal and yet complementary. I came away from this often funny and beguiling story wrestling with the adequacy of my own ideal for women and men and their true partnership. Needless to say, as a priest I also think the church needs to do a great deal more of that kind of wrestling about the meaning of women than it has so far.