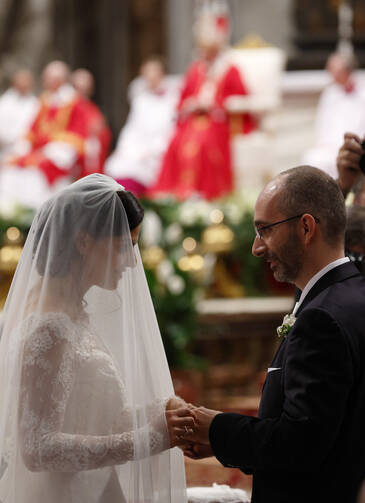 The idea that the Catholic Church in the United States should get out of the civil marriage business drew new attention on October 20th when Archbishop Charles Chaput of Philadelphia tossed out the proposal in Manhattan at a lecture sponsored by the journal First Things. The archbishop did not formally endorse the idea, but some have.

Archbishop Chaput mentioned the idea toward the conclusion of the 2014 Erasmus Lecture, in which he discussed same-sex marriage as a threat to religious freedom:

A friend recently suggested that the Church should get out of the civil marriage business altogether. In a way it makes sense. It’s hard to see how a priest or a bishop could, in good conscience, sign a marriage certificate that merely identifies Spouse A and Spouse B. This dramatizes, in a concrete way, that fact that we face some very hard choices in a new marriage regime. Refusing to conduct civil marriages now, as a matter of principled resistance, has vastly more witness value than being kicked out of the marriage business later by the government, which is a likely bet. Or so the reasoning goes. I don’t necessarily agree with this approach. But in the spirit of candor encouraged by Pope Francis, I hope our nation’s bishops will see the need to discuss and consider it a real course of action.

Traditionally, in the United States licensed clergy also sign a couple’s marriage certificate, which makes the clergy agents of the state. Already many nations require a civil ceremony even when a couple enters into a church marriage in the church.

Others previously have proposed the idea of separating the church marriage from the civil one, which would certainly emphasize the separation of church and state, but the merits are questionable. One problem lies in using marriage as one more weapon in the culture wars. It suggests the church should take a reactionary position and withdraw into itself instead of engaging with society.

Where would this withdrawal stop? Would it mean no partnerships with government, such as the ones that currently exist in the worlds of social services, health care and education, for example?

On the pastoral level, it could portend the loss of an opportunity to be part of a family’s life at one of its most important moments. It might make some political point, but likely it would be at the cost of the benefits of being one with a couple and their family at a moment remembered for decades.

It could lead to a further decline in church marriages, already being challenged by the growth in the number of couples who choose to get married in historic mansions, romantic outdoor settings or some remote island instead of their local church.

It also could be a seismic shock for people who have stood with the church through all the times it has fought against laws easing divorce. While the state has failed to uphold the permanence of marriage, the fact is that many who have come to the church both for the sacramental marriage and for a union recognized by the state have been well served by the church’s continued involvement with marriage as a social reality as well as a sacrament of the church.

In the United States, it might develop a two-tiered concept of marriage—a church marriage for the holy (which suggests fewer people) and a civil marriage for those who seek to meet a minimal, legal requirement. This suggests less emphasis on the meaning of the grace of the sacrament to help the couple, supported by their community of family and friends, grow in union together.

Unfortunately the culture wars continue and the sacraments, to some, look like an arsenal. Sadly, some have used the Eucharist in cultural skirmishes, treating Communion, for example, as a reward for a correct political position on abortion. Some have urged withholding baptism from children of same-sex couples. Pope Francis suggests that might amount to “a vaccination against faith.” The denial of the sacraments in both instances seems unholy. Considering marriage as part of a weapons stockpile in the same-sex marriage battle seems equally profane.

Mary Ann Walsh, R.S.M., is a Sister of Mercy of the Americas and U.S. Church correspondent for America.

Mary Ann Walsh
Show Comments (
3
)
Comments are automatically closed two weeks after an article's initial publication. See our comments policy for more.
Beth Cioffoletti
7 years 2 months ago
I think this is a good idea. The sacrament of marriage should have all of the seriousness, preparation and dignity of a man being ordained to the priesthood. Should be totally divorced (?) from the civil contract that can be gotten at city hall.
Bob Baker
7 years 2 months ago
"One problem lies in using marriage as one more weapon in the culture wars. It suggests the church should take a reactionary position and withdraw into itself instead of engaging with society. Where would this withdrawal stop? Would it mean no partnerships with government, such as the ones that currently exist in the worlds of social services, health care and education, for example?" The current "culture" is attempting to demand compliance of every person to a government that is increasingly losing whatever morality it possessed in its rules and regulations. Individual conscience doesn't matter, religious scruples don't either. The "partnerships" with government also bind the Church to conform even more to the "rules." The Church would be much better off without these encumbrances and their lack of morality, fairness and justice which government demands under the guise of caring for its citizens. Reactionary? If the word means that the Church needs to react to a government that increasingly only cares for select members and groups in this nation to the detriment of others, then yes...react!
phillip Champion
7 years 2 months ago

When a Catholic Tribunal meets to review a request for an annulment the question behind the exploration of the marriage at hand is whether the Sacrament of Matrimony had taken place or not. The Church is, therefore, not in the "business" of engaging with society when it comes to Sacraments. In much the same way that "abortion" is a canonical, spiritual, and metaphysical responsibility, rather than a political position, the Church must uphold what has been handed down to Her regarding those things which are eternal and unchanging; truths which must, out of the same responsibility, be taught and upheld. Engaging in society is a good thing as Vatican II teaches but should not fall too narrowly into a definition where the Church sees Herself accepting all social behaviors as good. I am in favor of gay civil unions but the Church cannot in any way witness to such a civil union for the purpose of declaring it a Sacrament especially when Cannon Law requires that the validity of the Sacrament depend on the couple being one man and one woman. Sr Walsh seems bent on trying too hard to mesh right with wrong where right can no more be wrong than wrong can be right.