I Watched "The Interview"...So That You Won't Have To 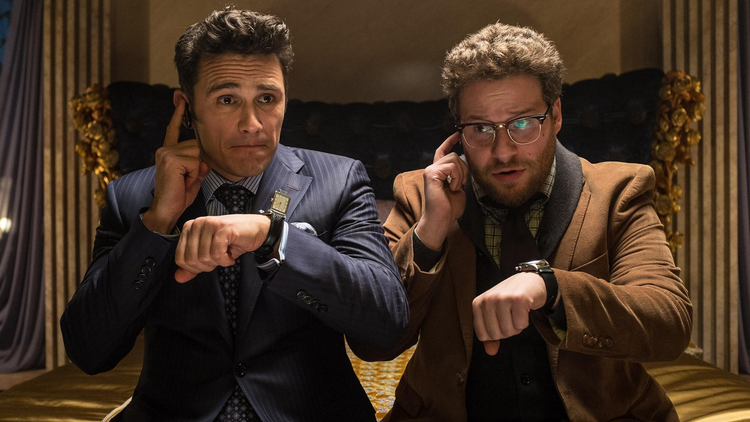 Very high up in the category of "Sentences I never thought I'd have to write" would be the following: "seeing this Seth Rogen bro-mantic comedy is your patriotic duty."

Rogen's new film The Interview--about the assasination of North Korea's Supreme Leader, Kim Jong-un--has caused an unprecedented level of international intrigue. A brief synopsis: As of Friday December 26, the controversy included accusations that North Korea was behind a cyber terrorist attack on Sony Pictures that included threats of violence if the film was shown. These threats caused movie chains to refuse to exhibit the picture, which in turn prompted Sony to cancel the film's December 25th release. After the decision to cancel was criticized by President Obama, Sony then revised their decision and released the film through independent theaters and various online services on December 24th.

No? Never fear, your intrepid culture columnist (aka me) has been following the story closely and plunked down $5.99 on Christmas Eve to watch The Interview on Sony's direct site. That's right, while you were drinking egg nog, wrapping gifts and getting ready to go to your local 8pm Midnight Mass, I was laying on my parent's couch, typing in my credit card info so I could watch two bumbling entertainment journalists attempt to assasinate the leader of North Korea. My verdict? The inept journos portrayed by Rogen and James Franco have nothing on the real life comedy being played out by the bumbling entertainment company executives behind the scenes.

I haven't been able to find any reasearch on whether "The Muppet Show's" Fozzie Bear ever had a stoner son, but if he did it would have to be Seth Rogen.  Rogen is an incredibly likeable presence whose films have veered from brilliant hits--Superbad (co-writer and actor) and 40-Year-Old Virgin (actor)--to  forgettable misses--The Green Hornet (co-writer and actor) and The Guilt Trip (actor). In The Interview he has teamed up again with his longtime collaborater Evan Goldberg to co-write, co-direct and star as he did with 2013's This Is the End.

Like that film, much of the premise for The Interview relies on the sexually ambiguous friendship between Rogen's and Franco's characters. It was a funny conceit in This is the End to have Franco's character have an awkward man crush on Rogen but to go back to that same well again so soon in The Interview feels like a bit of a comedic crutch.

Franco, is certainly a talent in his own right but his career choices beg us to ask the question: what exactly is his talent? He has spent much of his career in what appears to be a compulsively peripatetic quest to be creatively unpredictable. One minute he's signing on to play a recurring role in a daytime soap opera, then he's getting his PhD in literature, next he's appearing in big budget comedies before heading off to teach in an MFA program... I'm honestly not sure if he's creating a brilliant new career model for artists in the post-big-media world or if he has a new form of creative ADD-HD.

Don't get me wrong, I honestly admire his adventurous spirit and his diversity of interests, but please don't blame the audience when we find it difficult to accept you as a ridiculously airheaded TV personality especially after you've spent so much of your time publicly demonstrating how smart you are and how seriously you take yourself. It turns out, even in a hyper-fragmented media world, there is such a thing as saturation.

The Interview is not without funny moments. Randall Park does a good job of creating a cinematic Kim Jong-un who convincingly straddles the divide between psychopathic dictator and pathetic loser. Most of the movie's best moments involve his relationship with the insipid television host Dave Skylark (James Franco).

Still, when the smoke clears, the lingering impact of The Interview will not be as a film but as a seminal moment in which Hollywood seriously began to address the feature film world's parallel to cable television's cord-cutting trend. In other words, it is an opportunity to reconsider their shotgun marriage business model with theater chains by beginning to imagine a much more agile model in which they could exhibit major releases directly to consumers.

Movie theaters take a 50% cut of every ticket they sell, not to mention the 100% they collect from their mind-numbingly-priced soda and popcorn. The fact is Sony could have charged a lot more than the $5.99 I paid to rent this movie for 48 hours. Consumers wouldn't have balked at paying two, three or four times that much to see The Interview. In American's minds that's a small price to pay to feel a vague glow of patriotic spirit and support free speech, no matter how silly and inconsequential it is.