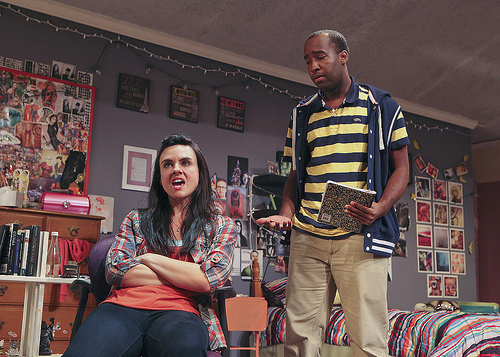 I have been re-reading parts of Walt Whitman's Leaves of Grass since seeing the world premiere of a new play by Lauren Gunderson, I and You, at the Marin Theatre Company several nights ago. The play is a product of the National New Play Network, which is the country's alliance of non-profit theaters that champions the development, production and continued life of new plays. "I and You" is part of the network's " Rolling World Premieres" program. It will later be produced by the Olney Theatre Center in Olney, Maryland and the Phoenix Theatre in Indianaoplis.

Especially in his two poems, "Song of  Myself" and "I Sing the Body Electric," Whitman celebrated the basic enmeshment of self with others, of body and soul, the body's connection with nature. As Whitman put it in "Song of Myself": "Every atom belonging to me as good belongs to you." He also states: "I am of old and young, of the foolish as much as the wise, of maternal as well as paternal, a child as well as a man, stuffed with the stuff that is course and stuff'd with the stuff that is fine." We are all inter-connected. No harsh American rugged individualism and cut off atoms in this most American of poets. We Americans would be very well served (and it is, of course, a Catholic motif) by some massive injections of Whitman's robust sense of a relational self.

In the play, Gunderson uses the words of Walt Whitman to inspire her two high school age characters and lift them into a realm of expression all their own. The way the characters express a sense of self is so much what happens when you're 17. It is about figuring out who you are, self-definition and self-identity, at a moment of life when there is almost unfinished potential.

In the play Anthony, an African American basketball star and a player of the saxophone, comes into the room of cranky, chronically ill Caroline. She excoriates him as an intruder. Anthony explains that they had been paired by their high school teacher to collaborate on a major project to de-construct Whitman's "Leaves of Grass," especially his use of the two pronouns, "I" and "You." But Whitman's I expands beyond mere reference to himself to include the inter-connectedness of everything. His I is a majestic we and his you can not be cut off from the I. Anthony understands the poem very well but has no skills to make a poster to prepare their joint presentation. In the process of learning how to work together, the two teens find out just how fundamentally they complement each other.

Caroline rarely makes it to school because of her illness and her need for a transplanted kidney. She is a congenitally ill high school senior, an acerbic loner who richochets betweeen her childhood stuffed animals and her passion for photography and early Elvis Presley movies. She lives inside her stuffed room, a kind of collage and communicates with her mother in the same house by texting. She is, at first, a highly unlikely candidate for inter-connectivity, isolated as she is from other people and living most of her life through mere texting rather than true connections. Anthony quotes to her the Whitman line: "I  too am not a bit tamed. I too am untranslatable. I sound my barbaric yawp over the roof of the world." He invites her to find in herself her barbaric yawp!

When they first meet, Anthony tells her he has just come from playing a basketball game which was cut short by the sudden death of one of the high school players who simply collapsed when going for a re-bound. I shuttered at this reference since I once attended a basketball game where something similar happened to one of my students, Denis Carter. When he first collapsed, there was a call: "Is there a doctor in the house ?". When moments later they called for a priest who anointed him, we realized that what we thought was a mere fainting spell was more serious. I and another Jesuit went with the doctors who took Denis to the hospital and were deeply touched when they emerged crying saying there was nothing they could do for him and, also, that they really had no clue how or why he had so suddenly died coming down from a re-bound.

Because of this memory, I was haunted throughout the play by the incident, rarely mentioned again until a startling final scene. In the final scene, as the two teenagers finish their joint project, Anthony gets up to leave. Caroline tells him he can not go. It is only then we learn that the intruder is just that: a ghost of the dead boy who died on the basketball court but whose new inter-connectivity with Caroline is that he is the source of her much needed kidney transplant. We then see Caroline on a hospital gurney after having received her transplant and hear her mother's voice calling out to her.

No man is an island and no one, ultimately, either lives or dies alone. Especially during a time when our country has been hijjacked by a governmental shut down and the inability of parties to cross the aisle from their I to another you to make a we, I found it moving to get immersed again in Whitman's great American opus. We do need to feel again that "every atom belonging to me belongs as well to you" and to put together our individual bodies with wider nature from which they stem and are so intimately connected.