The Humbling History of World War I 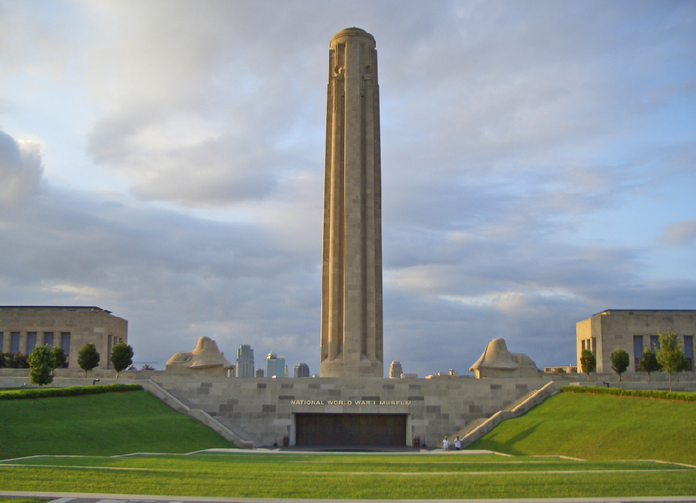 In late June I drove to St. Louis, Mo., to attend a family reunion with 21 distant cousins I’d never met. Two days after my return, on June 28, I made a trip to Kansas City’s Liberty Memorial on the100-year anniversary of the assassination of Archduke Franz Ferdinand whose murder triggered World War I. The memorial houses the National World War I Museum, the only World War I museum in the United States. As a child, my grandmother had been taken to the dedication of the Liberty Memorial in the 1920s. I remember her telling me of the huge crowds that turned out to honor those who died in what was then called the war to end all wars.

It was overcast and beginning to thunder as I walked up the mall to the museum. I debated turning back from what seemed a quixotic mission. I knew I was coming as much in memory of my grandmother as to honor the millions who died in the war or the archduke and his wife murdered in Sarajevo. The war and the assassination of the heir apparent to the Austrian-Hungarian Empire were distant and far off. My grandmother was as much a personal link to them as I had, though I had visited the archduke’s castle in Bohemia and had recently read more about him—his opposition to war with or over Serbia, the valor with which he had died, murmuring “It is nothing,” about his wounds, as his life slipped away from him.

History of a humbler sort had drawn me to St. Louis. I was curious to meet the unknown cousin who had called me up out of the blue the year before and interested to learn more about a side of my family I knew little about. At our first event, Guy gave everyone there a copy of the family tree he’d prepared. I’d always regarded genealogy as a slightly weird hobby pursued by people with an unhealthy interest in lineage, but I pored over the family tree trying to ascertain who all these people were I was meeting and how they were related. Spread out over three pages, the tree gave me a sense of the sweep of time and the way generations multiply in the world, sending out tendrils this way and that like the Virginia creeper taking over my yard. Looking at the names of my great great-grandparents and their children, I couldn’t help but wonder about them. Who were they? What did they do?

From the smallest events to the largest, the basic questions of history don’t change much. "The judgment of history" sounds objective and authoritative, but there’s rarely a single or simple judgment. Instead, there are the diverse opinions of individuals whose views are shaped not only by facts and research but by values, culture, temperament, imagination and empathy. History can be dry, but even when dry it is always seen through a particular set of eyes. “The ‘facts of history’ do not exist for any historian until he creates them, and into every fact that he creates some part of his individual experience must enter,” wrote the American historian Carl Becker.

A century after World War I, there’s less consensus on the causes and culpability for World War I than one would assume. The role of the Serbian government in the assassination of Franz Ferdinand and his wife, the ultimatum presented it, secret agreements between France and Russia, the destabilization of the international system caused by the first two Balkan wars—the historical debate goes on. And nationalism, which a century ago colored judgment of which nations were at fault, has not disappeared as a factor in the debate.

During this coming centennial year, we will all hear more about World War I. American politicians often invoke World War II, but the First World War does not lend itself to easy exploitation. The good war against evil dictators is a potent rallying cry, but leaders taking their countries into a catastrophic war for motives that remain murky even now, a century later, is not. That makes remembering World War I all the more important since the “good” war, if it exists, is an anomaly. After Iraq and Afghanistan, Americans are more skeptical of war, but to what extent is uncertain. Our drone attacks continue. We’re now arming “moderates” in Syria and are back in the game in Iraq, albeit reluctantly. The neo-cons who brought us the Iraq war, the very minimal gains of which are rapidly slipping away, continue to peddle their opinions in newspapers and on news shows. Our hawks are shameless today; our doves timid.

But the party of war is always popular. It was a century ago, when Europe marched off to a war that few leaders professed to want but even fewer were prepared to resist. The mass slaughter that occurred is one of the most tragic chapters in modern history. A war expected to last no more than three or four months took four years and 20 million lives and brought down three empires.

These next four years will probably by the first and last time that national and international attention will focus on World War I in any concentrated way. Will the war be commemorated 100 years from now? It’s unlikely. A century seems about the limit for how long any historical event remains real and vivid to people. After the last participants die, after the descendants who knew them die, an event ceases to have the same resonance. It becomes not an experience for ordinary people to recall and reflect on and be moved by but distant history for scholars to study.

But for the present, we have the First World War to consider, a war of such magnitude that it has a moral claim on our imagination. The historian Fritz Stern called it “the first calamity of the 20th century, the calamity from which all other calamities sprang.” Do we owe it to ourselves, if not to the dead, to try to understand how it happened? Doing so won’t change the past; it may change us. Reading about the culture of terrorism in Serbia, the calculation of advantage pondered by different leaders in Europe, their blindness to any country’s views but their own and their universal conviction that they were acting defensively but other countries were acting aggressively may inform our view not only of the past but the present. We may conclude Faulkner was right when he said “The past is never dead. It’s not even past.”

Margot Patterson
Show Comments (
2
)
Comments are automatically closed two weeks after an article's initial publication. See our comments policy for more.
Bill Mazzella
6 years 6 months ago
"But the party of war is always popular." And always about greed and influence. Iraq was the most foolish. Made clearer since it happened right under our eyes. It is regrettable that Hilary finds it necessary to bash Obama while she does regret her vote for the Iraq war. Revolting to see the Neocons emerge for a few days spouting their "stupid stuff" war. Obama is very unpopular. but he brought us Health Care witdrawal from wars. But the "party of war is always popular" and apparently compelling. Kill the Lybians responsible. Rush into arming the rebels in Syria. Bomb Iran. Etc. Obama needs Bill Clinton as his chief of staff. To speak for him. Obama certainly has his faults. But he is not as bad. I mean even Maureen Dowd is bashing him. Maybe he needs to have an affair with an intern. Or to go on a battleship and declare "Mission Accomplished."
Gabriel Marcella
6 years 6 months ago
Margot: A splendid meditation on the great calamity. Evocative and powerful. My grandfather fought for Italy on the Austrian front. He would sing the songs that the soldiers sang to remember his days in that terrible place. Never has the world seen such stupid and irresponsible decisions by leaders who went to war so blithely, and so unmindful of consequences!.In addition to being relatives!