How Should Christians Respond to the Court's Decision on Same-Sex Marriage? 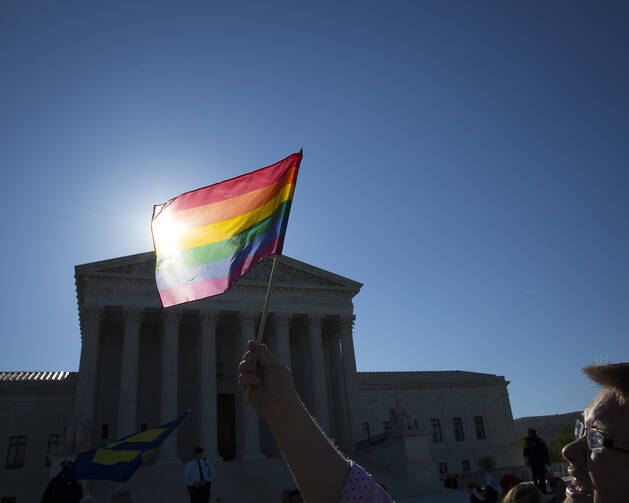 With this now-famous line, the Second Vatican Council opened its “Pastoral Constitution on the Church in the Modern World” (1965). This passage immediately came to mind this morning as I heard of the U. S. Supreme Court decision (Obergefell v. Hodges) that upheld the constitutional right to same-sex marriage. My personal response was emotional in the way that the reaction of so many others has been in the wake of this landmark case. My reaction has been solidarity for a population of people who have indeed been “afflicted” and whose experience for so long, millennia perhaps, has been more “grief and anxiety” than “joy and hope.” But today, at least in the United States, things appear to be changing.

There is doubtless contention on the subject of whether or not this is good news or bad news for the church. On the one hand, church leaders such as the current president of the USCCB, have decried this high-court decision and compared it to Roe v. Wade. Archbishop Joseph Kurtz stated in a press release that today’s decision “is a tragic error that harms the common good and most vulnerable among us.”

Yet, on the other hand, authoritative church teaching seems to offer us other ways to reflect on today’s decision. For instance, returning to "Gaudium et Spes," we read: “True, all [women and] men are not alike from the point of view of varying physical power and the diversity of intellectual and moral resources. Nevertheless, with respect to the fundamental rights of the person, every type of discrimination, whether social or cultural, whether based on sex, race, color, social condition, language or religion, is to be overcome and eradicated as contrary to God's intent. For in truth it must still be regretted that fundamental personal rights are still not being universally honored" (no. 29).

LGTB women and men have indeed suffered—and continue to suffer from—discrimination based on their sexual orientation. In some parts of the world this discrimination is made manifest with the threat of execution! It would appear that today’s decision could align well with this call for the church to “overcome and eradicate” such discrimination and affirm the “fundamental rights of the person.”

Similarly, we might look to Vatican II’s “Declaration on the Relation of the Church to non-Christian Religions” ("Nostra Aetate") for parallel wisdom in how to approach reflecting on today’s decision. Early in the text, the Council Fathers write that there are truth and wisdom in the cultural and religious traditions, practices, and perspectives of those who do not affirm the Christian faith. We read: “[The Catholic Church] regards with sincere reverence those ways of conduct and of life, those precepts and teachings which, though differing in many aspects from the ones she holds and sets forth, nonetheless often reflect a ray of that Truth which enlightens all [women and] men” (no. 2).

Perhaps we might look at what is affirmed in today’s decision about the inherent dignity and value of all women and men, regardless of their sexual orientation, as something to be referenced in the spirit of that which reflects a “ray of that Truth,” which is the love of God in Christ.

We should recall of course that the First Amendment to the U. S. Constitution protects the Catholic Church—and other religious communities—from being compelled to perform religious services for same-sex spouses. What has taken place today is a matter of civil rights, literally. The definition of marriage has not changed for the Sacrament of Matrimony in the Catholic Church, but perhaps this court decision like the recent referendum in Ireland should have us asking difficult theological and moral questions, questions that have been largely avoided for some time. After all, it is interesting that 56 percent of Catholics express support for same-sex marriage, according to a 2015 Pew survey.

So what is the right way to respond to today’s decision? The Christian response is love. And the Second Vatican Council has challenged the church to remember this amid the complex realities of our world. I understand the church’s teaching on the Sacrament of Marriage, firmly accepting and holding all that is taught definitively. Still, I can’t help but embrace what "Gaudium et Spes" and "Nostra Aetate" exhort all Christians to do in celebrating the dignity of the person, as well as the joys and hopes of all women and men.

Daniel P. Horan, O.F.M., is a Franciscan friar, a columnist for America, and the author of several books.

I found myself wondering if it is possible that same-sex attraction is rooted in DNA, and possibly if it is not a biological or Divine intervention to reduce the expansion of the human race in the light of our demonstrated ability to pollute the environment to the extent of submerging the coasts, evicting millions of people, and turning Western farmlands into desert. 108 degrees in the shade, with irrigation water being rationed ... cactus in our backyards?