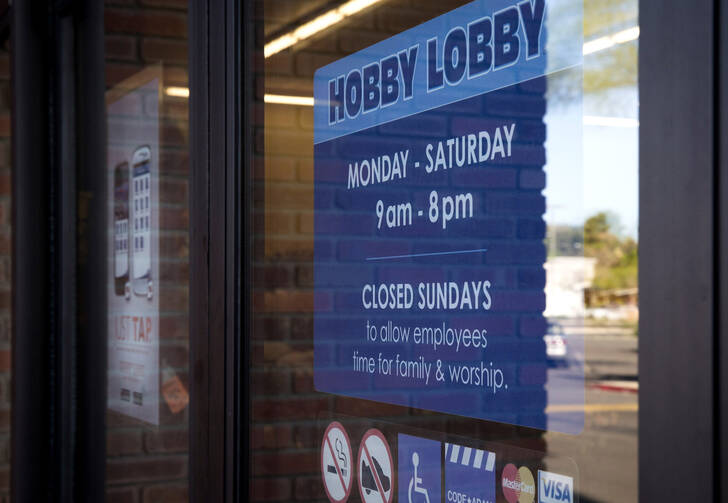 When the Supreme Court on June 30 issued a split decision narrowly backing the right of for-profit corporations to deny contraception coverage to their employees for religious reasons, many assumed that faith-based nonprofits would have it easy when their own cases eventually reach the high court.

Windham noted that in two rulings by lower courts on June 30, several of Becket's faith-based clients received last-minute relief to shield them from complying with the mandate, which takes effect on July 1.

"The ruling in Hobby Lobby and then these two rulings in quick succession show that the HHS mandate is on its last legs when it comes to religious nonprofits,'' Windham said.

Yet many analysts say that in fact what worked for Hobby Lobby—the national craft store giant owned by the Green family, who are evangelical Christians—may not necessarily work for the Little Sisters, who operate nursing homes for the poor around the country.

The nuns are the main plaintiff for a range of religious nonprofits and institutions who argue, in cases that paralleled the claims of for-profit businesses, that complying with the Obama administration's mandate to provide free birth control coverage would violate their religious freedom because they object to contraception.

So when those cases reach the Supreme Court, why wouldn't the Little Sisters eventually receive the same treatment, or even greater deference, than a corporation like Hobby Lobby or Conestoga Wood Specialties, its Mennonite-owned co-plaintiff?

The key difference is that the Health and Human Services Department has already offered an accommodation to faith-based nonprofits that allows them to sign a waiver giving a third-party administrator permission to take care of the birth control coverage, with no further involvement by the religious group.

The Little Sisters and others argue that even signing such a waiver entangles them in something they view as morally objectionable. (Hobby Lobby and other plaintiffs do not object to contraception per se but are concerned about what they say is mandated coverage of abortion-causing drugs.)

But Justice Samuel Alito, writing for the majority in the 5-4 decision, suggested that the accommodation offered to religious groups could have been a fine solution if provided to for-profit corporations as well.

"That accommodation does not impinge on the plaintiffs' religious beliefs that providing insurance coverage for the contraceptives at issue here violates their religion and it still serves H.H.S.'s stated interests,'' Alito wrote.

That in fact was the same argument made by Hobby Lobby's lawyers in oral arguments before the Supreme Court in March—a move that prompted Michael Sean Winters at National Catholic Reporter to suggest at the time that if the justices accepted that line of reasoning, "religious organizations will not have a leg to stand on.''

After the decision came down on Monday, Winters said that in fact that's just what happened.

Writing for Religion News Service, Mark Silk, director of the Leonard E. Greenberg Center for the Study of Religion in Public Life at Trinity College, also predicted in March that the justices would decide as they did this week—and on Monday he wrote that if they follow their logic when the faith-based groups come before them, the Little Sisters et al. could be in trouble.

One is that the majority based their decision on the Religious Freedom Restoration Act, or R.F.R.A., of 1993, which requires that the state must have a "compelling interest'' if it is to infringe on religious rights, and it must use "the least restrictive means'' possible.

The majority essentially assumed, but did not rule, that the government did have a compelling interest in providing birth control coverage to women. But the five justices said the government could find a better, less restrictive way to accomplish that goal, like paying outright for the coverage.

Yet Justice Anthony Kennedy, in a concurring opinion, pointedly noted that "the means to reconcile those two priorities are at hand in the existing accommodation.''

And Kennedy is the second factor clouding prospects for the nuns and others, because he is considered the swing vote on the court, and when the Little Sisters' case comes up he could swing the other way.

In fact, the Hobby Lobby decision, Silk predicted, "will prove to be a significant setback for the Catholic bishops and other free exercise maximalists, a good omen for contraception coverage advocates, and a fine result for those interested in a reasonable balance of the interests at hand.''

University of Virginia law professor Douglas Laycock, a leading religious freedom expert, agreed that the court's suggestion "that the government's accommodation for nonprofits is a less restrictive means for the for-profits does not bode well for the nonprofits.''

The court specifically does not decide the claims of religious nonprofits who don't even want to send the form claiming the objection,'' Laycock said. "But I would not be optimistic about that claim.''

At Mirror of Justice, a Catholic legal blog, University of St. Thomas law professor Thomas Berg welcomed the ruling but also predicted that the majority opinion and Kennedy's concurrence "imply that some form of the nonprofit accommodation will be held a permissible solution.''

And at First Things, a conservative journal of religion and politics, St. John's University law professor Mark Movsesian conceded that "the language here is a bit opaque and may cause trouble in future.''

On the other hand, Kim Daniels, a former spokeswoman for the U.S. Conference of Catholic Bishops and an attorney specializing in religious freedom issues, contended that there was "strong language'' in the majority opinion supporting the claims of religious nonprofits like the Little Sisters.

Daniels also did not read Kennedy's opinion as undermining that stance.

I think that worries about Justice Kennedy's opinion are misplaced,'' Daniels, now a senior adviser to Catholic Voices USA, wrote in an email. "I find it hard to believe that Justice Kennedy would confirm R.F.R.A. protection for for-profit corporations, but not for the Little Sisters of the Poor and others like them.''

Daniels and others also noted that the majority also explicitly refused to engage the underlying religious claims being made by Hobby Lobby and Conestoga—claims that would be central to the arguments by the Little Sisters and others, and which could underpin a ruling in their favor.

Ira Lupu, George Washington University law school professor emeritus, essentially threw up his hands and called the impact of the ruling on the Little Sisters case "completely uncertain''—a view that was probably more widespread than any claims about what the justices will, or will not, rule when the faith-based nonprofits come before the high court.

David Gibson - Religion News Service
Show Comments (
2
)
Comments are automatically closed two weeks after an article's initial publication. See our comments policy for more.
Vince Killoran
8 years 1 month ago
I'm disappointed with the commentary AMERICA has provided on the ruling: Berg, Desgro, and Alvare weighing in with strong endorsements of the majority decision. What about other legal scholars? Let get some diverse and nuanced views!
Mario Pauls
8 years 1 month ago
Useful journalism presents both sides of an issue with equal weight and without expressing an opinion for or against. I respect religious Journals that do this and I see that America Magazine has achieved a balance in this article.