Hindus and Catholics together in Washington, D.C. 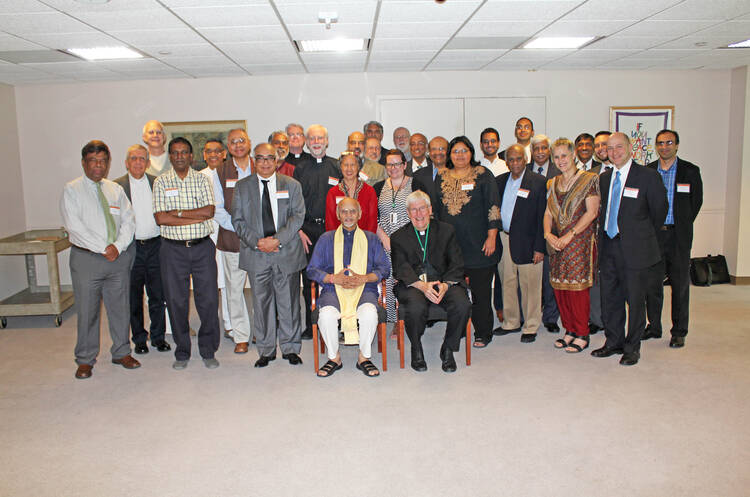 Cambridge, MA.—Religion is much in the news these days, with the bad and the tragic gaining most of the attention. Much more is happening that is good and constructive and hopeful, even if rarely capturing the headlines, as most people of most religions do live together in harmony and mutual support, living out their faith in our complicated world.

One of the important conversations that does not capture much attention these days is that between Hindus and Catholics here in the United States. Catholics, we know, have been here a long time and constitute a major portion of the nation’s population. The Hindu population of the United States is growing, now reaching about 2.5 million, or .5 percent of our nation’s population. While at various times over the centuries there have been Hindu-Catholic tensions in India, here the relationships have been largely very friendly and positive. The Hindus who have come here, like other Indians, have been largely of the professional classes, doctors, educators, and engineers, committed to settling down, interested in good schools, stable community life and civic leadership. Many American cities now have Hindu temples built by the local community, and larger cities, such as New York, Chicago and Los Angeles, have numerous temples.

Perhaps because no real problems have arisen, and because of the very diverse nature of Hindu religious structures, Hindu-Catholic conversations have been mainly local and low-key, rarely if ever reaching the level of official dialogues. In Los Angeles, for example, a Hindu-Christian dialogue group has been meeting for a number of years, with annual forums at Loyola-Marymount University. I have participated several times in the Hindu-Christian dialogue meetings that has been occurring annually in the Washington, D.C. area for over nearly 20 years. In May 2015, I was privileged to be part of a dialogue at the Durga Temple in Fairfax Station, Virginia, in which Cardinal Jean-Louis Tauran, president of the Pontifical Council for Interreligious Dialogue of the Vatican, was a leading participant.

Just the other day, on July 7—hence this post—there was another very valuable Hindu-Catholic dialogue, hosted by the U.S. Conference of Catholic Bishops, in Washington D.C., near the Catholic University of America campus. This exploratory meeting, a follow-up to the May 2015 meeting, brought together about 30 Hindus and Catholics, leaders in their communities who are actively involved in the work of insuring that the two religions work together on issues of shared concern. We were particularly glad to have members of the Indian Catholic community in attendance too. Naturally, the long-settled and large Ameircan Catholic community has its own history and place in American society; it was exciting to hear from the Hindus present of their efforts to make sure that the Hindu religious traditions are better understood in American society. I have always thought that despite significant differences in theology and in some practices, Hindus and Catholics are meant for one another, possessed of consonant philosophical and theological, spiritual and devotional traditions, and I was glad to be invited to participate in the day-long meeting.

While much was accomplished just by the time together (including a fine Indian lunch), three substantive topics were discussed during the day, with speakers from the two traditions:

These topics were, I would say, wisely chosen, since they are diverse, and of importance in various ways. The first deals with a fundamental theological topic, deep faith stances and dispositions toward the other; the second with the practical essential matter of education, both the learning of the other tradition, and the self-presentation of one’s own tradition in textbooks used in private and public schools; the third with a matter of monumental urgency facing all people of all faith traditions today. It was good to hear from both communities on each topic, since this highlighted both common concerns and differences distinctively of import to each. The discussions following each were lively, perceptive questions were raised and new angles brought forward. It was a good sign that each discussion could have gone on much longer. While much more is required on these topics, both theoretically and in practice, we were thinking them through together, and that in itself is a valuable step forward.

The meeting was given a spiritual tone right from the start, with prayers offered by members of each community, and a blessing (in Sanskrit) before lunch.

The organizers, including John Crossin, O.S.F.S., executive director of the Secretariat for Ecumenical and Interreligious Affairs of the U.S.C.C.B.,  Dr. Anthony Cirelli, Associate Director, and Mr. Sant Gupta, Director of Interreligious Affairs at the Durga Temple, prepared for this meeting over the past year, with abundant consultation in the two communities. That the meeting ended with everyone asking when the next meeting will occur was a good sign that their meticulous work paid off.

At one point I was asked what the point of such meetings is. I said that I thought the meetings are valuable on several levels: first, there are many theological issues and matters of historical importance that we need to face together; second, every community today needs to build itself relations with other communities, for the sake of good relations and friendships, all of which are of value especially before any crisis occurs; and, as I mentioned above, Catholics and Hindus have much in common spiritually and in the presence of God, and can learn, in companionship, to be better Hindus and Catholics, wiser and more dedicated while advancing on the path to God.