A High Quality of Life 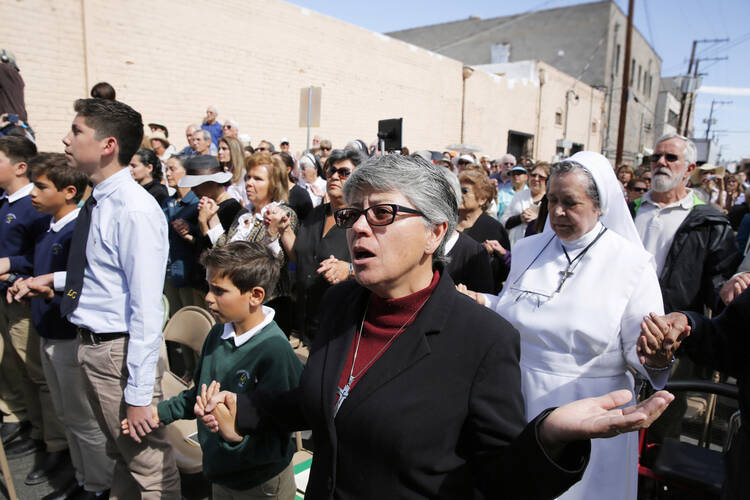 Catholic sisters in the United States can breathe a sigh of relief.  The final report of the Vatican investigation of American women’s religious orders, issued today, is a positive, sometimes adulatory, document, which praises the many contributions of women religious in this country.  It takes a generous approach and includes none of the critiques that many American sisters feared when the Visitation was first announced in 2008.  (This evaluation is separate from the Vatican’s investigation of the Leadership Conference of Women Religious, the umbrella group for many congregations.)

The report of the “Apostolic Visitation,” issued by the Vatican congregation that oversees religious orders, also offers a helpful snapshot of the challenges that most women’s religious communities in this country face: declining vocations; dwindling financial resources thanks to sisters historically being “undercompensated,” as the report states; and difficulties in finding women of sufficient youth for leadership roles in their congregations.  As such, it is a document that will most likely be welcomed by many of the women religious who are heroes to American Catholics.

The report is noticeable mainly for what it does not do.  It does not issue blanket condemnations. It does not set out a list of new rules for women’s religious orders in the United States.  It does not ask them to abandon their work in social justice.  It does not condemn feminism—a topic explicitly mentioned early on as one of the motivating factors for the investigation—indeed, the word is not even mentioned.  It does not call for any action by religious orders, except in the most general of terms, and when it does so it encourages the actions that all religious orders are encouraged to do: pray more, reflect on ways to increase vocations, consider their relations with the hierarchical church.  It does not place them in receivership as has been done, in essence, with the LCWR.

Mainly, it does not criticize American sisters, but praises them.

The document is a general, and generally positive, overview of what spiritual writers call the “lights and shadows” in women’s religious orders today.

When the Apostolic Visitation was announced in 2008, many American sisters expressed a profound sense of dismay and demoralization as a result.  Such a Visitation was, as the final report admits, “nearly unprecedented.” Normally such visitations--usually carried out by a local bishop, and not Vatican congregations—come in response to a serious scandal or malfeasance.  While the report says that visitations are “normal,” this refers more to the internal visitations, that is, a religious superior visiting her own community.  In short, a Vatican Visitation is usually reserved for a grave event.  Vocations were on the decline, as everyone knew, but was this the reason for the Visitation?

The genesis for the Visitation, then, seemed mysterious, which frustrated many sisters with whom I spoke at the time.  (Mother Mary Clare Millea, ASCJ, the “Visitator” admits this in an interview with Walsh, RSM, in America, published today.)  In time its origins became clearer.

According to many sources, Cardinal Bernard Law, the former archbishop of Boston who had resigned after the widespread sexual abuse crises in his archdiocese, was identified as one of the prime movers behind the investigation.  Some of the dissatisfaction of Cardinal Law and others had with women religious was crystallized in a conference in Stonehill College, in 2009, where one sister publicly excoriated U.S. sisters for creating "global-feminist-operated business corporations" and "controlling all structures and resources."  Cardinal Franc Rodé,then prefect of the Congregation for the Institutes of Consecrated Life and Societies of Apostolic Life, the congregation responsible for the Visitation, gave a sharply critical address at Stonehill on the state of women’s religious life, saying that many of the orders were characterized by a “certain strain of feminism, now outmoded.”

The next year, in 2009, Cardinal Rodé repeated his critique: “Above all, you could speak of a certain secularist mentality that has spread among these religious families, perhaps even a certain ‘feminist’ spirit.”  Not long afterwards, the Congregation for the Doctrine of the Faith announced a separate investigation of the Leadership Conference for Women Religious, which represents the majority of the women’s congregations in this country.

Women religious in this country, not surprisingly, felt beleaguered.

One particular phrase bothered many sisters with whom I spoke: the Visitation would investigate their “quality of life.” One woman religious in her 70s said to me at the time, “Who is investigating the quality of life of bishops and priests?”  Another was more pointed: “We’re in our 70s and 80s.  Why can’t they leave us alone?”

But in time the sisters’ fears seemed to lessen, especially after the appointment of Archbishop Joseph Tobin as the secretary of the Congregation in 2010.  Early on, Archbishop Tobin, himself a former superior general of his own religious order, the Redemptorists, took a more pastoral tone, calling for “justice and charity” in the Visitation.  Archbishop Tobin later left the Congregation after being named archbishop of Indianapolis.

Two years later, in 2011, many US sisters welcomed the appointment of a new prefect, Cardinal João Braz de Aviz, in who said the (separate) investigation of the LCWR caused him “great pain.”  Cardinal Aviz also said that his main aim in his role was to “rebuild trust” and “listen again.”  Many sisters with whom I spoke thought these remarks might betoken a gentler approach to the investigation.  They were correct.

After offering fulsome praise for the historical contribution of their “selflessly tending to the spiritual, moral, educational, physical and social needs of countless individuals,” and highlighting the educational work, the report sets forth its own rationale for the Visitation--which was the “challenging times” in which orders find themselves.  (Again, note the absence of a reference to feminism.)

Women religious as well as their colleagues and friends will find in the report a fair depiction of the state of Catholic sisters in the United States.  They are aging, usually in their 70s, with declining vocations, but have a “strong sense” of the history of their foundresses and founders, and they “draw strength” from the examples of their courageous early members.  Catholic sisters are intensifying efforts to work with lay colleagues.  They are struggling in terms of vocation promotion and some orders have left vocation promotion behind completely.  Life in community settings is “varied,” ranging from sisters living in large houses to some living on their own, usually for reasons of ministry or health.  Sisters are actively engaged in social justice work.  They often struggle to make ends meet.  For all of this the Congregation praises them for their “dedicated and selfless” service.

But the report does not stint from the difficult things that the Visitator heard from the sisters, who were clearly blunt.  And it was here that the report most surprised me.  Some sisters expressed a desire for “greater recognition and support of the contribution of women religious on the part of pastors.”  In short, they feel underappreciated and under-supported by priests and bishops.  Some felt that they did not have “enough input into pastoral decisions which effect them or about which they have considerable experience and expertise.”  (As if in response, the report restates Pope Francis’s desire to have more women, and more women religious specifically, involved in “decision-making in different areas of the Church’s life.”)

The report also candidly admits that the Visitation was met with “apprehension and suspicion” with some religious congregations refusing to “collaborate fully.”  Some congregations, several sisters told me a few years ago, when asked to explain their “quality of life” simply mailed in a copy of their constitutions.

At various points, the report urges sisters to look more deeply at their charisms (that is, the founding spirit of their orders), their community life, their prayer and their relationship with the church.  It also notes Pope Francis has asked the Congregation to look at Mutuae Relationes, the document that governs relations between the Vatican and religious orders.  But these kinds of encouragements are regularly offered to religious orders.  And the revision of the Vatican document will affect all religious orders—men and women—and it is not a critique directed at American sisters specifically.  After the “great pain” that this Visitation caused many sisters, the report is a positive document that praises the extraordinary contribution of women religious in this country.

After years of heartache on the part of American sisters, and hard work on the part of the Visitator and her team, the final report begins and ends by saying what should always be said, and what should have been said at the beginning of this process, to the courageous, hardworking and faithful women religious in this country:

James Martin, S.J.
@jamesmartinsj
Show Comments (
14
)
Comments are automatically closed two weeks after an article's initial publication. See our comments policy for more.
JIM GROGAN
7 years 11 months ago
Having been taught by the wonderful Sisters, Servants of the Immaculate Heart of Mary, having worked along side several of these women when I taught at Immaculata University and later in my parish and retreat centers with Sisters of Saint Joseph and Sisters of Mercy, and with grateful appreciation for the Dominican Sisters of Hope who taught my sons, I can think of no better phrase to complement the relief that this report has cast religious women in a positive light, echoing Father Martin's closing: "Thank you, sisters." In this Year of Consecrated Life, I pray that all Catholics remember to thank God for the blessing of these courageous and dedicated daughters of Jesus, whose lives offer a witness to the Gospel that few can mirror. Many have taught us, or taught those who teach and guide us; all have prayed for us, and for God's children around the world. Let us join our thoughts with Jesus' own (John 17:20): "I do not pray for these only, but also for those who believe in Me through their word." Rev. Mr. Jim Grogan
Walter Sandell
7 years 11 months ago
The Spirit has moved mountains! Deo Gratias! Thank you, Sisters.
Nathan Schneider
7 years 11 months ago

This is so heartening and well-deserved. But now I think it is the job of not just the sisters but the church as a whole to consider how to keep the charism and spirit that the sisters embody alive in new ways. It terrifies me that future generations may not have the same faith-instilling experiences with Catholic sisters that I have had, and I worry that this is a problem that many sisters' communities are not equipped to address on their own. It's a challenge for everyone. I'm inspired, for instance, by the ways in which young lay women like Karen Gargamelli and Marcia Lee are experimenting with new approaches to faithful community life—approaches that draw from the legacies of sisters while applying them to the needs of young people today.

I hope that we don't take this report as a sign for complacency, but as a call to creativity.