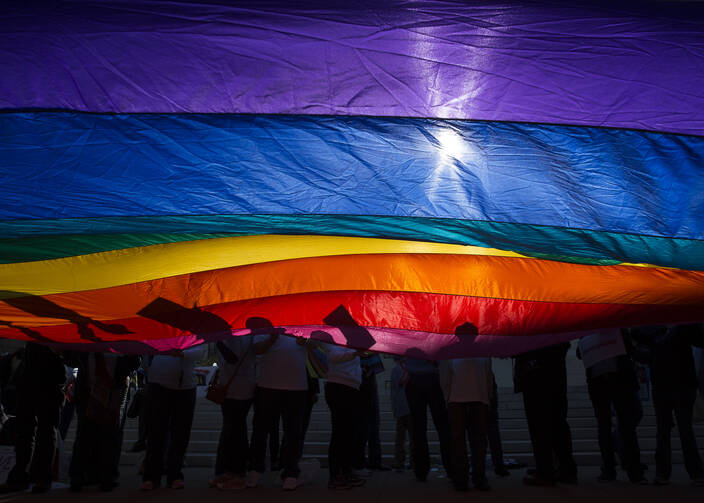 Court-watchers and constitutional-law experts almost unanimously expected that the justices would do what they did in Obergefell v. Hodges. The result is not a surprise, nor is the fact that the author of the opinion for the five-justice majority was Justice Kennedy. His opinion in today’s case confirms and solidifies his legacy with respect to the Constitution and sexual-orientation controversies and it represents the “next step”—and, again, the expected one—in a line of other Kennedy opinions going back to (at least) 1996.

As Chief Justice Roberts graciously noted in his dissent, the result of today’s decision is, for many, a cause for celebration and great happiness. It should also, though—for everyone, whether or not they welcome the result—at the very least prompt questions about the role of the Supreme Court in pushing social change and invalidating the longstanding policy choices made by elected and accountable officials. To be sure, it is sometimes the task of judges in our system to protect vulnerable rights from invasion or neglect by the majority. It is no less important, though, that judges not substitute their own preferences for the rights that are enshrined, and the limits on government that are set down, in our written Constitution.

Today’s ruling raises many questions, and not only about the “next steps” with respect to marriage-related rules and nondiscrimination laws. For example, the reasoning in Justice Kennedy’s opinion is in significant tension with the opinion—which Justice Kennedy joined—in the Court’s 1997 decision that upheld the right of governments to outlaw physician-assisted suicide. In that case, Washington v. Glucksberg, Chief Justice Rehnquist had insisted that a “liberty interest” had to be deeply rooted in our country’s history and traditions before it could be treated as the kind of “fundamental right” that is protected against state regulation. The asserted right to doctor-assisted suicide did not, the Court concluded, have that kind of pedigree. In Obergefell, however, Justice Kennedy did not follow Rehnquist’s example in allowing history and tradition to constrain judicial power. And, as the pressure in some states to embrace physician-assisted suicide increases—in the name of “dignity” and “compassion”—it is not clear that the Court’s wise refusal in Glucksberg to constitutionalize a right to that practice will stand.

In addition, as many commentators—and also the dissenting Justices—have noted, the ruling and reasoning in Obergefell will have implications for the religious freedom of individuals and institutions alike. As Chief Justice Roberts wrote:

. . . The majority graciously suggests that religious believers may continue to “advocate” and “teach” their views of marriage. . . .  The First Amendment guarantees, however, the freedom to “exercise” religion. Ominously, that is not a word the majority uses.

Hard questions arise when people of faith exercise religion in ways that may be seen to conflict with the new right to same-sex marriage—when, for example, a religious college provides married student housing only to opposite-sex married couples, or a religious adoption agency declines to place children with same-sex married couples. Indeed, the Solicitor General candidly acknowledged that the tax exemptions of some religious institutions would be in question if they opposed same-sex marriage. There is little doubt that these and similar questions will soon be before this Court. Unfortunately, people of faith can take no comfort in the treatment they receive from the majority today.

The Chief Justice is correct: These “hard questions” will arise. Indeed, in many places (consider, for example, the recent controversies regarding religious-liberty proposals in Arizona and Indiana) they already have. If, as Justice Kennedy asserted in his opinion for the majority, limiting civil marriage to male-female couples demeans and insults gays and lesbians, then it is not clear why a legislature will, or even should, generously accommodate religious beliefs and practices that depart from the moral commitments and premises underlying today’s decision.

It has often been said that there is no conflict between religious freedom and the expansion of civil marriage to include same-sex couples because, first, no church or minister will be required to perform or recognize as religiously valid a same-sex marriage and, second, religious people (and everyone else) remain free to believe that marriage really is, and should be recognized in law as being, between a man and a woman. However, meaningful religious liberty is about more than the freedom of private belief or the ability of communities to worship as they please. Going forward, it will be a serious and difficult question whether, or to what extent, religious institutions will be able to cooperate with the government in providing social services, or benefit from programs that enhance educational opportunity (vouchers, tax-credit programs, etc.), or receive research grants and other generally available funds unless they agree not to discriminate in hiring and other practices against same-sex couples.

It’s been said that the “Supreme Court follows election returns” and it is true that while today’s opinion invalidates the longstanding laws of most states it also embraces a strong trend in public opinion and in popular culture. Again, the “hard questions” that the Chief Justice mentioned had already been posed and they would have continued to arise even if the Court had come out the other way. It remains to be seen how Justice Kennedy’s opinion shapes the answers to those questions.

Richard W. Garnett is the Paul J. Schierl / Fort Howard Corporation Professor of Law at the University of Notre Dame

Richard W. Garnett
Show Comments (
4
)
Comments are automatically closed two weeks after an article's initial publication. See our comments policy for more.
Anne Danielson
7 years 7 months ago
The new Law that The Supreme Court has created is this: In order to be married to one another, it is no longer necessary to exist in relationship as husband and wife. Since when has The Supreme Court had the power to invalidate the validity of a valid marriage by removing the necessary requirement of a marriage contract, which is the ability and desire to exist in relationship as husband and wife, thus changing the letter of the Law? How can this result, which is totally unconstitutional not be a surprise? Promoting marriage fraud is an impeachable offense. The marital act, which can only be consummated between a man and woman, is Life-affirming and Life-sustaining. In order for Justice Kennedy's claim that existing in relationship as husband and wife demeans same-sex couples to be valid, Justice Kennedy would have to demonstrate how same-sex sexual acts respect the inherent Dignity of the human person, and demonstrate why these acts should be elevated to the same status as the marital act. There is nothing demeaning about desiring that all persons be treated with Dignity and respect in private as well as in public. On what basis can anyone argue that one should lose their tax exemption because they refuse to condone any act, including any sexual act, that does not respect the inherent personal and relational Dignity of the human person?
Anne Danielson
6 years 6 months ago
As Catholics, we are not called to challenge God, The Ordered Communion of Perfect Complementary Love, The Most Holy And Undivided Blessed Trinity; as Catholics, we are called to challenge and address the issues of the day, in the light of our Catholic Faith. Believe in Salvational Love, God's Gift of Grace and Mercy; The Eucharist Is The Source and Summit of our Catholic Faith. http://rorate-caeli.blogspot.com/2016/07/the-church-as-communio-revisiting.html#more
Anne Danielson
7 years 7 months ago
Something to think about in the days to come: http://mirrorofjustice.blogs.com/mirrorofjustice/2015/06/a-sliver-of-silver-lining.html The act of slavery, abortion, and redefining man according to sexual desire/inclination/orientation, by objectifying the human person, is a violation of our unalienable inherent Right to Life, to Liberty, and to The Pursuit of Happiness, that has been endowed to us from God at the moment of our creation, at conception. Unalienable: incapable of being alienated, that is, sold and transferred." Black's Law Dictionary, Sixth Edition, page 1523: YOU CAN NOT SURRENDER, sell or transfer unalienable rights, they are a gift from the creator to the individual and can not under any circumstances be surrendered or taken. All individual's have unalienable rights. Inalienable rights: Rights which are not capable of being surrendered or transferred without the consent of the one possessing such rights. Morrison v. State, Mo. App., 252 S.W.2d 97, 101. YOU CAN SURRENDER, sell or transfer inalienable rights if you consent either actually or constructively. Inalienable rights are not inherent in man and can be alienated by government. Persons have inalienable rights. Most state constitutions recognize only inalienable rights. http://www.gemworld.com/USA-Unalienable.htm Regardless of desire or consent, every human person has the inherent Unalienable Right to be treated with Dignity and respect, in private as well as in public, and because this inherent Right is UNalienable, one cannot surrender our inherent Right to Life, Liberty, and The Pursuit of Happiness, the purpose of which is what God intended, even if we desire to.
Anne Danielson
6 years 6 months ago
Love is ordered to the inherent personal and relational Dignity of the persons existing in a relationship of Love. (The Blessed Trinity) Every beloved son or daughter, from the moment they are created and brought into being at conception, has the inherent Right to be treated with Dignity and respect in private as well as in public. All of us have disordered inclinations of various types and degree, some more difficult to overcome than others; God desires that we desire to overcome our disordered inclinations, so that we are not led into temptation, but become transformed through Salvational Love, God's Gift of Grace and Mercy. Men and women are designed in such a way that it is not possible to engage in same-sex sexual acts without demeaning our inherent Dignity as beloved sons and daughters. No one should be condoning demeaning sexual acts of any nature including between a man and woman united in marriage as husband and wife. Why not tell those men and women who have developed a same-sex sexual attraction the truth? It is because we Love you, and respect your Dignity as a beloved son or daughter, that we cannot condone the engaging in or affirmation of any act, including any sexual act that demeans your inherent Dignity as a beloved son or daughter. The desire to engage in a demeaning act of any nature, does not change the nature of the act. We Love you, and because we Love you, we desire that you will always be treated with, and will always treat others with Dignity and respect in private as well as in public. We will not tolerate the engaging in or condoning of sexual behavior that does not reflect the upmost respect for the human person. May God Bless our beloved sons and daughters who are struggling with a disordered same-sex sexual attraction, help them to heal their wounds, and guide them as they learn to develop healthy and Holy relationships and friendships, that are grounded in authentic Love, and thus respectful of the inherent Dignity of the human person. https://www.google.com/search?q=overcoming+same-sex+attraction&ie=UTF-8&oe=UTF-8&hl=en&client=safari