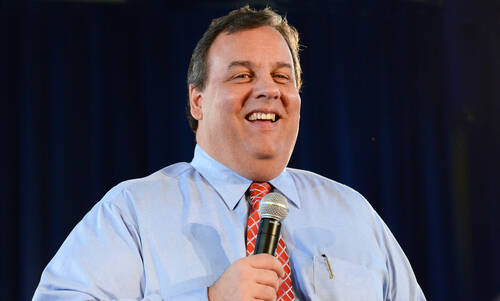 Chris Christie’s faith has been brought up by journalists after he signed a bill barring licensed therapists from trying to turn gay teens straight. Many are saying that this is at odds with Catholic teachings on homosexuality. During an interview with Piers Morgan in 2011 Christie admitted that he believes he may be dissenting from the church: “Well my religion says its a sin...but for me personally I don’t look upon some who is homosexual as a sinner.”

The Catholic Church has been clear that it believes homosexual acts to be sinful, but it also has recognized that homosexuals must be “accepted with respect, compassion, and sensitivity.” It even states in the catechism that, “Every sign of unjust discrimination in their regard should be avoided.” There is vast agreement amongst the medical community that conversion and reparative therapies are ineffective and harmful to the patients. The American Psychological Association, the American Psychiatric Association and the American Medical Association have all come out against it. The therapy is conducted based on the idea that homosexuality is a curable mental disorder; an idea that the medical community fervently rejects. In fact, physicians have reported treating patients for problems brought on after participating in reparative or conversion therapy. The risks of this therapy are serious; they include depression, anxiety and self-destructive behavior.

Studies also have shown that gay teenagers are much more likely to have attempted suicide than straight teenagers. Conversion therapy contributes to a culture that promotes “internalized homophobia,” where an individual begins to hate their sexuality sometimes even before they are aware of it. This can cause anxiety, depression and substance abuse, all of which are risk factors for suicide.

Pope Francis has ushered in a new way of thinking—or, perhaps more precisely, a 2000-year-old way of thinking—by asking the question “Who am I to judge?” Growing up in a Catholic household, I was always taught to love everyone and judge no one, that all people have human dignity and the right to live life with that dignity. I learned that all people are created in the likeness of God and that each person deserves the same rights as another. Everyone is worthy of equal respect regardless of race, ethnic back round, age, gender, economic status, sexual orientation or any other characteristic. We as Catholics have to ensure that all people are able to live dignified life. That we have to be, as Pedro Arrupe would say, men and women for others.

The LGBT community is often marginalized by society; it is our job as Catholics to ensure that our gay and lesbian brothers and sisters are respected and are able to live dignified lives. Its our job to ensure that they do not feel ashamed of being who they are, that they aren’t forced into depression because of something they are not able to change. I understand the church’s desire to uphold the Sacrament of Marriage as being between one man and one woman. I understand that the church denounces homosexual acts as being intrinsically disordered, similar to the way it speaks about masturbation and fornication. But I do not believe that it is not okay for our society to use those acts as justification for making people, human beings created by God, live in a world of hostility. It is inexcusable to allow youth to be exposed to faulty medical practices, when experts tell us that there are grave side effects that could possibly jeopardize their lives or sense of human dignity. We have to ensure that the world we live in is welcoming of all people and that no person should believe that they are worth any more or less based on their sexual orientation.

Governor Christie, on this issue, demonstrated how I believe a Catholic law maker should act. He took a step to make this world a little safer for those who may feel marginalized. He took a step to preserve the right to a dignified life. He took a step to do what the church teaches, to accept homosexuals with “respect, compassion and sensitivity.” Perhaps his example will inspire other governors to follow his lead and work to ensure out country's laws protect the safety and wellness of LGBT youth.

Ciaran Freeman is a summer intern at America and a senior at St. Peter's Prep in Jersey City, N.J.

Show Comments (
1
)
Comments are automatically closed two weeks after an article's initial publication. See our comments policy for more.
Tom Wilson
8 years 10 months ago
Some success, though often unreported (successes are loathe to reveal that they had the condition to begin with), has been achieved with reparative therapy. Generally in medicine, when a therapy or treatment is deemed harmful, research is conducted to determine less harmful ways for treating the ailment. For example, alternate methods to chemotherapy (a debilitating and even carcinogenic treatment itself) are researched for treating cancer. Whether homosexuality can be prevented/cured and how to do so is a function of its origins, the nature of which remains unknown. But even if it is genetic and immutable - and that's a big if - many a priest will tell you that it is is possible to avoid the temptation to participate in the sexual acts associated with the orientation. Indeed, many people have led healthy heterosexual lives notwithstanding their attraction to the same sex. Why we would want to deny young people the opportunity to avoid homosexuality in a heterosexual world is beyond my understanding.