In God We Trust: Responding to the Hobby Lobby Ruling 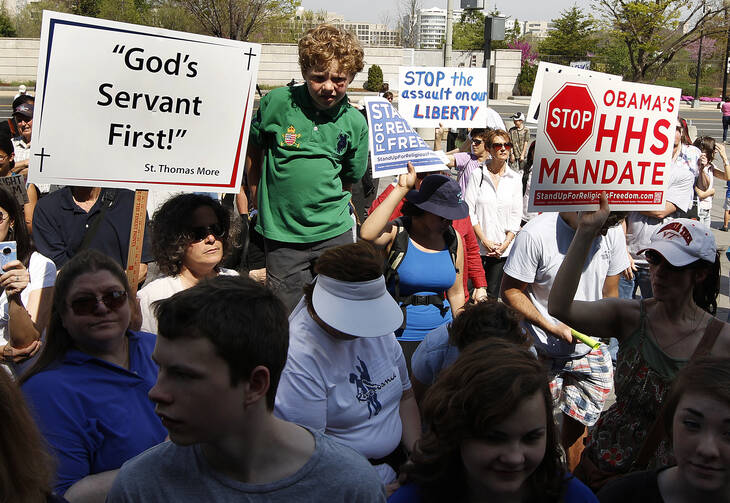 We live in a fallen world.

Sometimes we Catholics trust our politicians to fix the miseries that surround us, but we end up bitter and angry when they let us down.

Even in the United States, where we celebrate the ideals of our political system on July 4, there are chinks in the armor of our moral superiority.

Many younger Catholics feel torn between our two political parties, but are suffocated by the “us against them” rhetoric of some voices in our community, who side with one party while demonizing the other. In the reckoning of these Catholic voters, their party is always right, and the other party is always wrong. Looking to partisan rhetoric for guidance more often than the Gospels, they find ever more inventive ways to justify their party allegiance, making excuses whenever their side flaunts church teaching.

The reality, of course, is more complex. President Bush protected the womb, but promoted big business. President Obama passed universal health care, but failed to close Guantanamo Bay. Both presidents sent our soldiers overseas for the war on terror, perpetuating the regional wars that Pope Francis recently condemned as the last refuge of weapons profiteers in a nuclear age.

And then there is today's Hobby Lobby ruling in the ongoing battle of conscience over the U.S. Health and Human Services mandate that is part of Obamacare.

In a 5 to 4 decision, the U.S. Supreme Court ruled that the Christian-run Hobby Lobby doesn’t have to obey the HHS mandate that requires businesses to cover abortion-causing drugs in their employee health plans. The ruling applies to businesses and individuals, but not to religious non-profits like the Little Sisters of the Poor. Catholic schools, churches, and charities remain unaffected.

While it’s not yet evident what impact this ruling will have on the lawsuits brought by Catholic non-profits, it’s clear that some Catholics will celebrate this decision while others plot political revenge.

It is certainly a political defeat for President Obama, whose single-minded effort to implement universal health care has exhausted much of his political capital.

While the president has exhibited many noble intentions and ideas, his inflexibility on this one aspect of Obamacare has put him at odds with the U.S. Catholic hierarchy, making it difficult for many Catholics of good will to support his larger dream of affordable health care.

At times President Obama has equivocated, suggesting there would be a conscience exemption. But the reality is that the president wants this mandate and the bishops do not, regardless of his rhetorical attempts to soften the blow. So far, the only possible compromise offered by President Obama is an accommodation that would require Catholic non-profits to pay for abortion-causing drugs and devices indirectly through their health care insurers. The bishops refuse this accommodation.

We pray for our courts to safeguard religious freedom, but we also pray that Catholicism will endure in the United States with or without a mandate. In Canada, the Catholic Church has long survived under a similar arrangement. Yet we hope not to reach that point.

In the midst of this ongoing battle, a deeper issue to ponder is whether we in the church are still able to exercise any positive moral influence on life issues in our nation.

For too many of us American Catholics, political solutions revolve around the assumption that “we” are right and “they” are wrong. Politicians feed our vanity, turning Catholics against one another as we grow hardened in the conviction that we are always good and the other side is always evil. We seek to change others, but see nothing to change in ourselves.

Sometimes we forget that the message of Jesus Christ is opposed to this way of thinking.

In the Gospels, Jesus calls us to personal conversion, asking us to remove the wooden beam in our own eyes before we remove the splinter from the eyes of our brothers and sisters.

Aware of the evil as well as the good caused by the Roman Empire of his time, Jesus asks us to trust first in God, not in politicians. According to Scripture, what really transforms the world is not the letter of the law, but the spirit that animates it. In the Old Testament, Moses yearned for the day when Israel would follow God’s law out of love, rather than out of anger or fear.

We in the church care deeply about our world and we want to influence our nation for the better. But trying to change our world by legal means alone is not the answer. To make a real impact on our world, we must first ask God to change us through his love and mercy, achieving a deep personal conversion that is evident to others in our actions.

As we Catholics grow in compassion and love, we pray that others will look to us for the moral example we hope to provide. We pray they will know us by our love, not by our anger. And we pray that the words of our nation’s currency become more deeply incarnated within our hearts: In God We Trust.

Our world isn’t perfect. But neither are we. In God We Trust.