Giving thanks for just wage progress 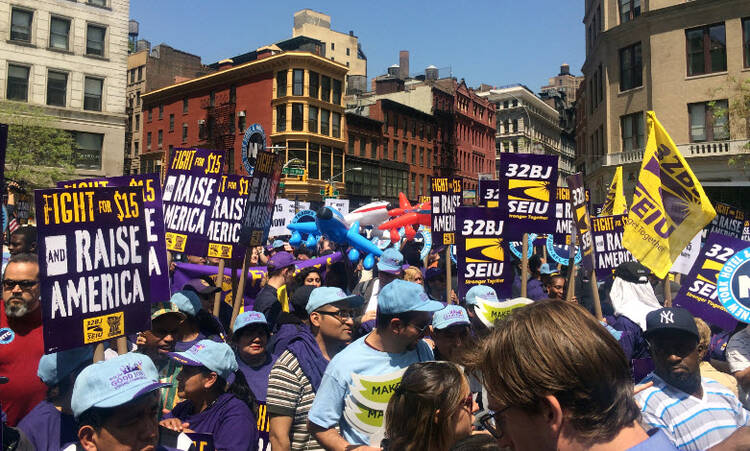 According to the Bureau of Labor Statistics, in 2013 more than 10 million U.S. workers belonged to the working poor: they worked but didn’t earn enough to escape poverty. Some three million American workers earn the minimum hourly wage of $7.25—or even less. Though most of us don’t realize it, a number of categories of workers are excluded from coverage under the Fair Labor Standards Act (FLSA), which establishes the federal minimum wage and overtime protections.

These are hardly tidings of good cheer as we approach Advent, but November has already seen two modest but hopeful developments chipping away at those exclusions. Until recently, the two million home care workers who tend to our elderly and sick were among those excluded. But a Department of Labor rule that extends these basic protections to men and women in such jobs took effect Nov. 12, 2015.

State and local government workers are another group excluded from FLSA coverage (although in many cases they are covered by a state minimum wage law). New York has done state workers one better than the federal minimum wage. New York is an epicenter of the “Fight for $15,” a campaign spearheaded by fast food workers that reminds Americans that the minimum wage is hardly a living wage. (For a full-time worker, the $7.25 federal minimum wage amounts less than $15,000 a year!) New York Governor Andrew Cuomo announced an order to phase in a $15 hourly minimum wage for state employees, one that promises to bring a living wage to thousands of men and women who currently receive less.

The laissez-faire economy has proved highly effective at securing the survival (and prosperity) of the fittest, but today’s labor market no longer guarantees a family-supporting wage to any adult willing to work. We owe the poor our charity, but even more, we owe each worker the opportunity to earn his bread by the sweat of his brow. Minimum wage protections can help preserve both the material well-being and the dignity of “the least of these.”