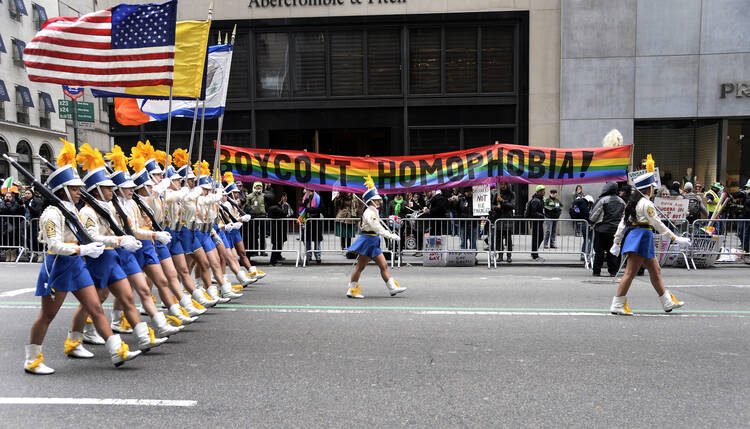 Cardinal Dolan is getting heat. He is grand marshal of the 2015 St. Patrick’s Day parade in New York and says he has no problem with the decision of the parade committee to allow gays and lesbians to march as a group in the oldest parade honoring St. Patrick in America. This is not a religious rite though some attend it religiously. It’s of course associated with Catholics, especially in New York where the saint is patron of the archdiocese’s (some say the nation’s) premier church, St. Patrick’s Cathedral on Fifth Avenue. The Catholic Church does not sponsor the parade, though the marchers go by the cathedral where the grand marshal traditionally greets the archbishop of New York. The parade also is preceded by Mass in the cathedral.

Unfortunately a lot of faithful critics and culture warriors are taking issue with Cardinal Dolan’s tolerance of the parade’s gay and lesbian contingent. They seem to advocate an in-your-face approach to anything gay.

The cardinal’s predicament typifies one of the most neuralgic points in the church today: how to balance pastoral and political and doctrinal positions related to gays and lesbian people. Few issues draw such ire as those associated. It is visceral, as if threatening one’s very identity.

Unfortunately, the church has been dragged into the rancor because of political positions forced by the advances of the gay rights movement. The movement provokes deep polarization of late. Even the federal government eventually refused to defend the definition of marriage as between a man and a woman for the purpose of federal benefits in the Defense of Marriage Act, a law passed with practically unanimous support and signed by President Bill Clinton in 1996. The government stopped defending the law in court in 2011 and two years later, the Supreme Court found the definition unconstitutional.

The Catholic Church rightfully feels the obligation to support marriage as between one man and one woman, and as a player in the public square strongly espouses its position. Its political position meshes with doctrinal teaching on the nature of marriage.

Nevertheless, Cardinal Dolan also has pastoral obligations. Many Catholics are gay, are related to gays, have gay friends. That is a reality to be dealt with. The U.S. bishops’ Committee on Marriage and Family voted in 1997 on a statement “Always Our Children,” that addressed the relationship between parents and their gay children. It drew fierce opposition from a number of people, but it cleared the air and comforted families who felt torn between what they understood to be church teaching and the natural love of mothers and fathers for children.

Where to draw the line?

Can a gay person participate in the corporal works of mercy, for example, by working in a church sponsored soup kitchen? Why not? Feeding the hungry is a religious obligation that crosses religious lines and is well rooted in Christianity.

Can a gay person take up the collection at Mass? It’s a service, not a doctrine. Why not?

Can a gay couple marry in the church? Since the church does not recognize such a union, this does not seem like something the church can approve of.

Can a gay person be welcomed to parade in honor of the saint who used the shamrock to explain the mystery of the Trinity? No reason not to say “march right in.” Can gay groups be disrespectful of the church? That’s been proven by San Francisco’s beyond tacky Sisters of Perpetual Indulgence. Can Catholic college students drink too much? That’s been proven in the streets of New York. Decorum does not always characterize the cold March celebration.

Cardinal Dolan’s position on the parade is the pastoral one; you don’t reject people for who they are. If a parent of a gay or lesbian child asked if they should invite their child to Thanksgiving dinner, any decent church person would say yes. When torn between being pastoral or political, a basic understanding of what it means to be a church community demands that pastoral take the day.