Forty Years after Saigon: An Interview with Bishop Dominic Luong 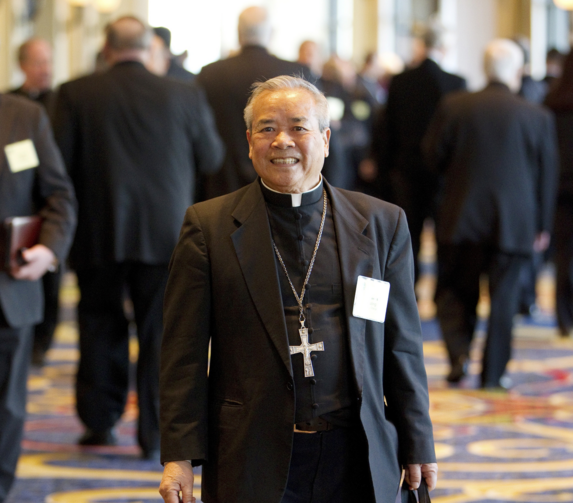 Bishop Dominic M. Luong, Auxiliary Bishop of Orange, is the first and only Vietnamese American Catholic bishop. Appointed to the California diocese by Pope John Paul II on April 25, 2003, he was ordained a bishop on June 11 of that same year. Reflecting his early work with Vietnamese Catholic refugees in the United States, the motto on his coat of arms is “You are strangers and aliens no longer” (Eph. 2:19).

Bishop Luong was born in Vietnam on December 20, 1940, and moved to the United States in 1956 to continue his seminary studies. He attended French-Vietnamese Elementary School in Vietnam, Holy Family Seminary High School in Vietnam, a diocesan seminary in Buffalo, and St. Bernard Seminary in Rochester, where he studied Philosophy and Theology. He later earned a Master’s Degree in Science from Canisius College in Buffalo. Bishop Luong was ordained a priest in Buffalo on May 21, 1966, for the Diocese of Danang, but the Vietnam War prevented him from returning to his home country. In response to the rising number of “boat people” arriving on American shores, he was eventually incardinated in the Archdiocese of New Orleans, where he founded the first Vietnamese Catholic parish in the United States, Mary Queen of Vietnam Church in New Orleans East.

Later this month, April 30 will mark the 40th anniversary of the fall of Saigon in 1975. On March 27, I interviewed Bishop Luong by telephone about his life and about the experience of Vietnamese Catholics over the past 40 years. The following transcript has been edited for length and content.

How did you experience the Vietnam War and fall of Saigon?

It was very sad in terms of the cost of human life. Millions of people died for nothing, including more than 50,000 American soldiers, and Agent Orange destroyed much of the best land in Vietnam. The Americans really provoked the war, rather than being attacked on the high seas as they claimed. I came to the United States in 1956, but the war stopped me from going home. Eventually I flew to Vietnam when Saigon fell in 1975, but could not get into the country, so I ended up working with refugees in Guam.

Why did you become a priest?

What role has Jesuit education played in your life?

I went through Canisius College and studied later at Fordham University. It gave me a great, well-rounded education. It didn’t teach me how to do things, but how to be a better human being.

What have been some joys and challenges for Vietnamese Catholics who fled to the United States during and after the war?

We’re doing very well. Language was a problem in the early years, but we’ve overcome it quickly. Vietnamese children excel in school, becoming doctors and lawyers. We have many doctors in California, where we also participate in politics. We currently have five mayors as well as many judges and school board members here. Americans appreciate the Vietnamese emphasis on the value of education.

How did you get involved with the early Vietnamese refugees who settled in New Orleans?

Since I couldn’t get into Vietnam in 1975, I worked at the refugee camp in Guam. I met my family—my mom and brothers—in that camp. Then I took one of four American military transits back to the United States to see what I could do for refugees here. After I helped my family resettle in New York, I moved in 1976 to New Orleans, where the largest concentration of Vietnamese refugees was living.

What role did the American Catholic Church play in coming to the aid of these refugees?

There was no comparison with any other organization. The U.S. bishops sponsored probably 50 percent of all Vietnamese refugees. Working out of the Archdiocese of New Orleans, I helped resettle countless refugees from rural fishing villages in a more urban society. The church provided education and scholarships to top universities like Stanford. I remember working personally with Tulane University to ensure that Vietnamese children had every opportunity to study.

How did Vietnamese Catholic refugees worship during those first years of transition?

We had a very difficult experience. Some communities welcomed us, but others didn’t. When we first arrived, Catholic pastors let us use parishes at siesta times like 1:00 pm, which was tough. Others gave us times so early in the morning that people couldn’t come. Many parishes gave us their space for only one hour each week. When the Vietnamese get to church, they want to stay afterwards to socialize, and that was hard in parishes that only gave us an hour. At the beginning, we didn't have enough money to build a church, so I bought a mobile home to use as the Vietnamese Martyrs Chapel. But a local landowner sued us because we were on his property. Finally, I went to Archbishop Philip Hannan, who gave me land for the mobile home. That was the beginning of Mary Queen of Vietnam Church, now a large and thriving parish in New Orleans East, which we founded in 1983. Today things are different all over the country. We now worship in 16-17 parishes in the Diocese of Orange alone, even though some places still struggle financially.

What were some internal and external challenges of building the first Vietnamese Catholic parish in the United States?

We took a lot of risks in New Orleans. As I said before, most of our first parishioners were fishermen with very little formal education, so there was a language barrier to integration in the local culture. Financially, we were so poor that we couldn’t do much at first, but after five years the collections started to go up and several wealthier parishes supported us. The pastor of the parish next door even paid our electric bills, but I didn’t find out about it until later. I’ll never forget his great charity.

How did the Vietnamese Catholic community overcome these challenges?

We relied a lot on the generosity of local parishes at first, but gradually we realized we had to “grow up” and take care of ourselves. We also started looking for worship spaces at a time when inner city parishes were closing as young Catholics fled to the suburbs. That made it easier for us to get abandoned church properties in urban areas. We fixed up old churches around the country, inviting Vietnamese as well as Hispanics to join us in parishes which often became trilingual.

What role have families, especially Vietnamese women, played in the faith life of the community in this country?

Vietnamese women are great and they have really kept our family life together. John Paul II and even Paul VI, but also Pope Benedict and Pope Francis, have talked a lot about the breakdown of the family as the cause of social problems. But family life in Vietnamese American Catholicism is still very good. You know, it’s been 40 years since the fall of Vietnam in 1975, and there are some changes taking place as young people become more Americanized. But family life is still very good.

What are some traditional values which have helped the Vietnamese American Catholic community flourish over the last 40 years?

What has it been like for you to be the first Vietnamese American bishop?

I remember once reading a book about how to become a bishop without really trying! That's how it was for me. When I was informed by the nuncio that the pope had appointed me bishop, I asked for time to think it over, but he said “no” because the process to select me had already taken 10 years. If I refused the appointment, he said it might be another 30 years before the pope appointed a Vietnamese American bishop. But it worked out well and I have been there for people who need me. Many bishops have even called me up to ask about Vietnamese Catholic customs and celebrations, including fasts and devotions.

It’s the episcopal motto on my bishop’s coat of arms: “You are strangers and aliens no longer,” from St. Paul’s letter to the Ephesians. We are no longer refugees, but brothers and sisters in the Lord. I picked it because I worked with refugees for so long.

What is your impression of Pope Francis?

He’s great! I read his words on the Internet and learn from him every day, especially his love for the poor. I'm glad he decided to celebrate Holy Thursday Mass in prison again, washing the prisoners’ feet. He’s really set a good example for us.

Looking back at the past 40 years, do you have any regrets?

I regret that the war happened. But even a crisis provides opportunities. Without the war, the Vietnamese would never have come to the United States. Now we’re here and we’ve done so well with our opportunities. In every crisis, there are opportunities for the people.

For my people, I expect a great future. They’re God-fearing and family-oriented people, very concerned about their futures. Based on these building blocks, I believe there is a bright future for them in this great society of ours.

What is the state of Vietnamese American vocations to the priesthood and religious life?

It’s great! You know, almost every U.S. province of Jesuits has some Vietnamese members. There are also many Vietnamese diocesan priests here. In Orange, almost one-third of the presbyterate is Vietnamese. There are so many vocations in some places that bishops don't know what to do with them. So I think the future of vocations is very bright.

Do you have any words of advice for future generations of Vietnamese American Catholics?

I would tell them to stick close to their families. That’s where they will live their values and morals in a way that can’t be found anywhere else. In our modern American society, we’re at a critical moment where we are at risk of losing that bond to family. If they stick to their traditional values, they will succeed and have a better life for themselves.

The Catholic Church has been good to us, giving the Vietnamese a good and solid foundation to build our futures in this country. We certainly appreciate that. About one-third of Vietnamese who emigrate to the U.S. are Catholics and the rest are Buddhists. The Catholic Church is a powerful symbol for Vietnamese culture and family life. Many Vietnamese families were poor in 1975 before they left Vietnam, but now they’re better off and maintaining connections to people who are still struggling. If you travel to Orange, the Vietnamese are doing very well here. I know one man who owns several supermarkets with 800 employees, the largest small business enterprise in California. That’s not too bad.