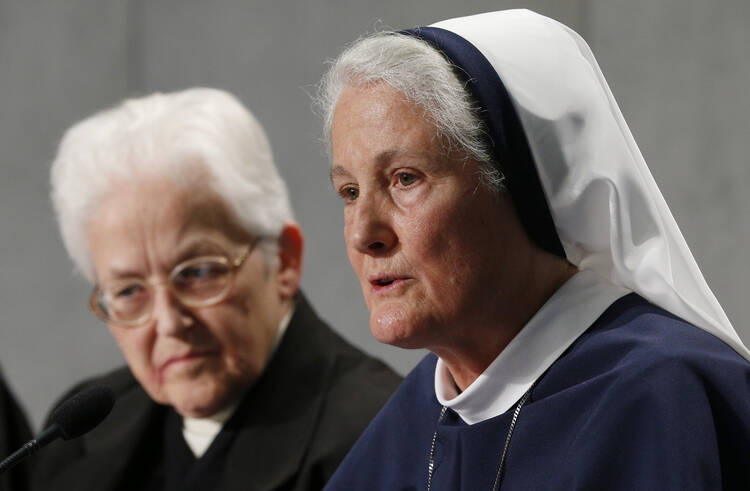 Mother Agnes Mary Donovan, S.V., is chairperson of the Council of Major Superiors of Women Religious and superior general of the Sisters of Life, an American religious congregation of women dedicated to promoting pro-life causes. She assumed that post in 1993, two years after Cardinal John O’Connor founded the congregation in New York and she became one of the first eight women to join. She resides at the community’s Annunciation Motherhouse in Suffern, New York. Mother Agnes Mary holds a doctorate in psychology and taught at Columbia University Teachers College before becoming a sister.

On Jan. 21, one day before the annual March for Life on the anniversary of Roe v. Wade, I interviewed Mother Agnes Mary by email about her work and vocation.

You and your Sisters of Life are participating in the annual March for Life in Washington on January 22, the 42nd anniversary of Roe vs. Wade, the U.S. Supreme Court decision that legalized abortion. What realistic chance is there at this point of overturning that law?

More than a century ago people would have thought that reversing legal slavery, which was an entrenched and accepted part of the social fabric of life of our nation, was impossible. So today in the spirit of the great abolitionist, William Wilberforce, I look realistically to the day when abortion is as unthinkable to the American mind as slavery is to every citizen of this free land.

Some casual observers tend to view the legality of abortion as an issue settled by the Supreme Court, but ongoing political battles suggest an ongoing split in the electorate. What has changed most dramatically over the past 42 years?

The presence and the passion of the youth and young adults of our nation, reared in the "culture of death," who proclaim and uphold the dignity of every human person has revolutionized the Life Movement. Every year the numbers of those attending the March-for-Life increases, and every year the average age of those attending decreases. The millennials are far more pro-life than their parents.

In your view, what would a more realistic abortion policy look like for the United States in our current political situation?

In view of reality, i.e., the truth about the human person, the only acceptable abortion policy is no abortion. However given our current political situation, first steps would include: providing greater protections for the health and safety of women; the involvement of adults in the abortion decision of minors; and, the guarantee of informed consent and counsel for those seeking to deal with the crisis of an unexpected or difficult pregnancy.

Short of repealing Roe vs. Wade, what can ordinary Americans do to fight for life, ensuring the right of every baby to be born and have a financially secure home?

Every American has an enormous potential to ensure that the life of a baby to be born through their daily witness to the goodness and beauty of life. We can by word and action build up a culture which receives every human life as a gift by our reverence. By word and action, our lives can speak volumes to those around us of the unique and irreplaceable value of every member of the human family.

Before I leave your question, Sean, let me suggest that no one has a “right” to be born into a financially secure home. Imagine a child born into the family of a “working poor” couple having the right to sue his/her parents for “wrongfully” making the decision to allow his/her life to be conceived in economic circumstances not to his liking? No such right exists, and hopefully such a “right” would never be legislated.

Pro-choice advocates have often justified legal abortion with quality of life arguments, saying there’s no sense in having more children than our society can reasonably support to live a fulfilled life. How do you respond to such arguments?

Who is defining what makes for a fulfilling life? Once the newest member of the human family is among us, who has the right to destroy that life because, by someone else’s measure, in some future day that little one may not have, what another defines, as a “fulfilled life?”

Cardinal John O’Connor of New York founded your religious congregation, the Sisters of Life, in 1991. How do you explain your group to Catholics and non-Catholics who haven’t heard of it?

The Sisters of Life are a consecrated witness to the glory of God who is the origin and destiny of every human life. The Sisters are committed to incessant prayer and a ministry of reverence for all human life, particularly the most vulnerable, beginning with the unborn child.

Why did you join the Sisters of Life?

The vocation of every religious sister and brother, and every priest is a response to the initiative of God. I was surprised by Love.

What keeps you secure in your vocation?

The following of every authentic vocation includes sunny days and days of great ardor, but at the heart of the vocation of a religious sister is her living relationship with the Lord. Living from the center point of that relationship and within the gaze of the Lord is my security.

The Blessed Mother and her amazing witness of faith in God. I love hearing her say: “Do whatever He tells you.” And secondly, our Father and Founder, John Cardinal O’Connor who was America’s great Apostle of the Gospel of Life.

How has your faith changed or evolved throughout the years of your ministry?

As with every disciple of the Lord Jesus Christ, simply living an intentional Christian life results by God’s grace in the deepening of one’s faith. I have seen miracles of grace in the founding of our community, and in the Lord’s solicitous care of those we serve in our apostolates. There is no denying God is alive!

Although we tend to focus on abortion at this time of year, due to the Roe vs. Wade anniversary, there are many other pro-life issues of concern to Catholics. Can you tell us about some which your sisters have been involved with recently?

We serve a large number of women. Many of our apostolates give women whose femininity, maternity or sexuality has been wounded the space to heal and reclaim the brilliant innocence of a pure heart and a fruitful love. These wounds can result from the effects of pornography, distortion of body image and sexuality born of a media culture, the suffering after abortion, etc. Underlying all of these effects of the culture of death is a contempt for human life.

In an early interview, Pope Francis famously took Catholics to task for talking too much about abortion at times, but he himself has been eloquent in speaking against it on forceful occasions. What do you make of the pope’s call for greater balance on this issue?

I believe that Pope Francis wanted to remind faithful Catholics that evangelization in a secular context must begin with the first proclamation, that of the Name and Person of Jesus Christ. It is only an encounter with the living God that compels men and women to conform their lives to the teaching of Jesus Christ. All evangelization must begin with an encounter with Jesus Christ. If that encounter is authentic then the moral teaching of the church makes sense and living accordingly becomes the desire of one’s heart.

It is our hope that those we encounter may have the joy of knowing and experiencing that they are loved, prized and precious in the eyes of God; and be convinced that nothing about themselves is too much for God—no sin, no failure, no betrayal—for Jesus desires to make “all things new.”

A greater realization of the culture of life in our nation and the world, in which every life is reverenced, and all people know their dignity before the God who loves them.

Sean Salai
Show Comments (
1
)
Comments are automatically closed two weeks after an article's initial publication. See our comments policy for more.
Egberto Bermudez
8 years ago
Thank you for another excellent interview, your question about Pope Francis and abortion is extremely pertinent and Mother Mary Agnes response is right on target.