FDR, Edward Herrmann, and the Drama of History 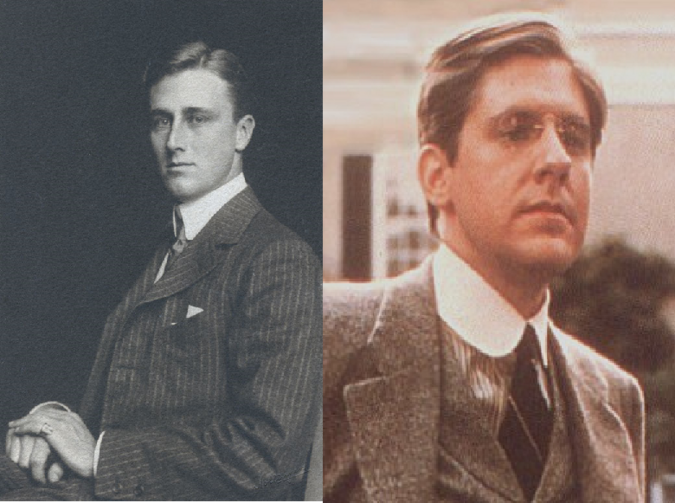 It was on January 30, 1882 that Franklin Delano Roosevelt, the 32nd President of the United States was born—and that was 133 years ago. It is hard to comprehend that a figure of modern American history can almost be counted in terms of centuries instead of years and in FDR’s case, almost two. FDR was a seminal personality of his time and despite one’s political leanings, whether Democrat or Republican, liberal or conservative, it cannot be denied that the Squire of Hyde Park had made quite an impression upon the country he led and the world he lived in. You only need to peruse the pages of a history book to realize that. The record of his presidency indeed left an indelible imprint upon his times and ours, and it is one that reverberates even to this day, sometimes controversially. Given that, and thinking about the man and his times on the anniversary of his birth, I also could not help but also remember another “FDR” who likewise left an indelible imprint—though a cinematic one—on the “small screen” and in other theatrical venues, too. That other “FDR” was the gifted actor Edward Herrmann.

To a generation growing up watching television and the movies, Edward Herrmann was the personification of FDR. As an actor, he stood head and shoulders above everybody else (literally—he was 6’5”) and he was an inspired choice to play the Depression era/World War II president for a generation who never knew the real man who had long since become an historical figure. Back in the day when there when television had only “The Big Three” networks (CBS, NBC, ABC) and public television (known as PBS), that was all people had to rely on when it came to diversion, entertainment or education, apart from the neighborhood movie theater. American viewing fare revolved around staple programs such as the nightly network news broadcasts (Walter Cronkite, John Chancellor, Howard K. Smith, Frank Reynolds, among others) sporting events (Howard Cosell’s verbal dustups with “the greatest fighter of all time,” Muhammad Ali, being the major event of the sporting world) or the occasional cultural program (“Mutual of Omaha’s Wild Kingdom” on Sunday nights for those of us kids who could never countenance Lawrence Welk and his “champagne music”). So in the mid to late 1970’s, television took a big leap in imagination when it came up with the concept of the miniseries and this is where Edward Herrmann strode across the cinematic historical stage. When "Eleanor and Franklin" appeared on television screens in January 1976 over the course of consecutive weeknights with Edward Herrmann and Jane Alexander in the title roles, with vivid recreations and superb acting from a great supporting cast, television would never be the same again. It was then that television, through the medium of the miniseries, made history come alive for many people, even me—a soon-to-be teenager in high school—an already avowed history buff.

"Eleanor and Franklin" was the beginning of the historical miniseries genre. "Eleanor and Franklin: The White House Years" would come a year later (to equally high acclaim), and then the critically received "Roots" (about the African-American experience), and a host of others followed. Even now, all these years later, whenever I hear the theme music from "Eleanor and Franklin," I am brought back to that time when I saw history come alive in a new way that dry, dusty history books could never attain (not to mention a few dry and dusty teachers whose dull, monotone voices only helped you to reach the heights of boredom in the shortest time possible).

As much as I liked history, actually seeing it through the talents and artistry of people like Edward Herrmann, made it come alive and made it approachable as well as meaningful. In time, I would see other such movies and docudramas: "Meeting at Potsdam" (about the Allied leaders meeting, post FDR and Churchill, to decide the parameters of the postwar world), all the various JFK adaptations, a few on Abraham Lincoln (who could forget the masterful Raymond Massey in Abe Lincoln in Illinois or Henry Fonda’s Young Mr. Lincoln, even if his prosthetic nose was way too big for the role, veering into Karl Malden territory), "The Adams Chronicles" (PBS’ entry into the historical docudrama sweepstakes, starring George Grizzard, William Daniels [of St. Elsewhere fame], Kathryn Walker and Nancy Marchand, among others) and later, James Whitmore’s sassy Harry S. Truman in "Give ‘Em Hell Harry!" It was so true to real life that when it premiered at Ford’s Theatre in Washington, D.C. (of all places!) it purportedly made Margaret Truman cry with nostalgia for the man she simply knew as “Dad” (the only line—among other memorable ones—that I can safely repeat from that show: “Now, people say I give ‘em hell. That’s not true—I just tell the truth and they think it’s hell!”). All that was to come, and I gladly watched them all, and I have Edward Herrman to thank for that.

Many years ago, while working at America, I almost had a chance encounter with Edward Herrmann, “FDR” himself. It happened one December evening during Christmas time (it might have been the night of Christmas Eve itself, but it was definitely during that time). I say “chance encounter” because while I actually never stopped and talked with him, I did see him: as I was walking past St. Patrick’s Cathedral in midtown on my way to Grand Central to get my homeward-bound train, when I actually walked right past Edward Herrmann (brushed beside him, really). In New York City it is not a hard thing to do, to walk or see somebody famous (or had been famous) in a crush of humanity; but on this night, I sawhim.  I could not believe my luck—I was about to say “Mr. President!” to the man who brought FDR alive for me on the screen all those years ago. But in my awe and admiration, the moment was lost; he walked quickly by and I did not get to chat up “Franklin D. Roosevelt” and tell him in Rooseveltian tones how “grand” he was, “just grand!”

I will always regret my missed opportunity to meet and talk with Edward Herrmann, though I was very glad to see him outside St. Patrick’s Cathedral on that winter evening. There would have a lot of things I would have liked to ask him about, especially—and particularly—about his craft and how he came to be a part of the dramatic fraternity. So it was with great sadness when I learned of his death at age 71 from brain cancer on New Year’s Eve, (December 31st, 2014) while perusing that day’s news on the Internet before turning my attention to the New Year to come. The man who made history come alive with that commanding voice through the medium of film, stage, and audiobook—a voice one could never forget—was silenced. It seemed—it was—incomprehensible that he was gone, but he was.

Playing Franklin D. Roosevelt was a role that most likely made Edward Herrmann’s reputation as an actor. True, he performed in many different roles and in many different venues; but it will probably be the role for which he will be most remembered. For a millennial generation, he may have been some actor on the "Gilmore Girls" and for others he may also be remembered in "Annie" as well as for his role as Father Joseph McCabe on that television medical drama, "St. Elsewhere" (one which I also avidly watched once upon a time), but for those like me, who grew up in another era, Edward Herrmann will always be FDR. He once said, in an interview, that he prepared extensively in order to portray Franklin D. Roosevelt; he even rented  a room near the president’s home in Hyde Park in order that he could study the personality of the man he was about to become on film. Years later, Edward Herrmann would look upon that experience as “a gift” and even he was surprised at his role’s impact: “And people still talk about it.”

Yes, as long as fine historical acting will be around, people will always talk about the role Edward Herrmann played to perfection and history buffs like me will always appreciate him for his personification of FDR and his times. And I will always be glad I saw him then, even in passing.