The Faith Journey of Pope Francis, Two Years On 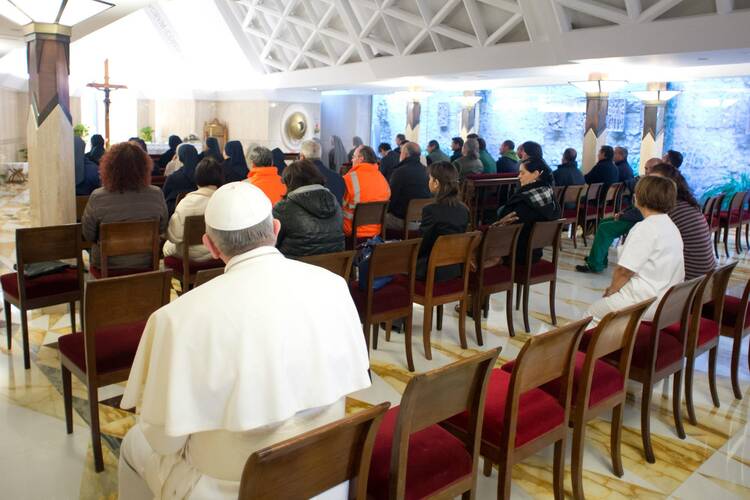 It is now two years since Jorge Cardinal Bergoglio emerged upon the balcony of St. Peter’s Basilica and appeared before the world as Pope Francis and entered into the affections of us all. Much has happened since then and yet it just seems as if it all happened yesterday: the silent figure in white looking out over the vast square taking it all in, surely wondering at the import of that moment; before giving his Urbi et Orbi, he asked to be blessed by the people first; the winsome smile, the simple heart-to-heart talk between a shepherd and his flock and the cheerful “good night, sleep well” which ended his peroration.

And then there was the simplicity of his manner, his bearing, and his dress. And his choice of a papal name, also a historic first: a harbinger of what the new pope’s priorities were to be. The fact that he was a Jesuit opened all kinds of speculation as to how that background and training would affect his performance of his duties as pope. Plus, the fact he was from the other part of the world, from the southern hemisphere—and a Latin American country, Argentina, at that—made the Church appear truly universal for the first time. And choosing not to live in the traditional papal apartments but among other people within the confines of the Vatican itself, that was also a “revolutionary” development. Eschewing triumphalism and embracing the essentials: if there was to be a description of the new pope’s “program” or “policy prescription,” this was it; but this was not “it,” it was just the start of a surprising pontificate which shows no signs of abating or “settling down.”

The historic election of this pope came on the heels of the historic resignation of another, due to the infirmities of age; it was Benedict XVI who paved the way for Francis. There was, for a time, great worry what this resignation was going to do to the Church; there were fears that somehow it would undermine it; that the “pope emeritus” choosing to still live within the confines of the Vatican would somehow create “opposing camps” of two groups, one favoring one pope over another. Fortunately, that has not come to pass because the faith that the Church possesses is more than any one man who may sit upon the throne of Peter and it is a faith held in common by the community of believers. And the reason that this has not come to pass is that both men are sons of the Church and neither would do harm to the institution that they had pledged their lives in service. Yet, while the Church is of divine nature, it also has its human component and it was this human element that made Benedict’s resignation such a poignant episode in the history of the Church—a priest, teacher, and theologian who was called to higher service who long ago would undoubtedly have preferred to attend to scholarly pursuits, he laid down the pontifical mantle because he was physically unable to shoulder it any more. You may or may not have agreed with his emphases, but one would have to have a cold heart not to feel for the man who had to bear the burdens of a seemingly impossible task.

And then Francis appeared before us.

If anyone ever had doubts about the efficacy of the Holy Spirit, they were surely lost on the evening when Francis was elected. He was the dubbed the “Pope of Surprises,” the “Pope of the Americas,” the “First Jesuit Pope” and on and on down the checklist. He had instant rapport with the multitudes and he made sure that the word “peripheries” was added to our everyday vocabulary, redirecting our focus on what the Church really is, really was, and really out to be.

Two years is still rather early for a pontificate, but it provides the outline of one, and Pope Francis has done exactly that. Just before his election as pope, he had already made plans for his own retirement to continue his simple ways of living as he had always had, to be near his people and near the place where he was born and reared. Interestingly, as commentators noted at the time, he seemed tired and he went into the conclave expecting to perform one more clerical duty before he laid down his charge as archbishop of Buenos Aires and settle into a retirement after an eventful priesthood serving his flock in Argentina. Of course, that did not happen.

The man in black was transformed into the man in white and the man who was seen to appear as “tired” was suddenly and magically rejuvenated before our very eyes. After the health problems of the previous two popes, John Paul II and Benedict XVI, Francis came upon the scene with all cylinders running and with energy to spare, seemingly making those less than half his age look winded. The ways of the Spirit are mysterious indeed.

Ever since that evening when that white dove, dubbed “Jonathan Livingston Seagull” sat atop the pipe above the Sistine Chapel that would soon belch out the white smoke announcing the election of a new pope and seeming to presage the newest in the long line of St. Peter’s successors, there have been no shortage of books, articles, and analyses of the comings and goings of Pope Francis and what his election heralds for him and for the Church. For all the experts out there, no one has that crystal ball that will tell us for sure how it will all turn out. Perhaps even Pope Francis himself doesn’t even know. What is important is what he does know: he wants the Church to be purified of its triumphalism and made truly relevant for the believer and the seeker in today’s world. That, in and of itself, is truly a daunting task and that is a job more than any earthly man can bear or do. What matters is that he is a man of faith and he wants that faith shared by all to be given for all. There is much on his docket and much that must be accomplished. May God grant him the peace, health and fortitude—and the time—for that task. And we ought to grant him his wish he always makes upon encountering people: “Pray for me.”

There are many images and impressions of these last two years that linger in the mind. But for me, the most poignant—and the one that says it all—was when I saw a photograph of Pope Francis simply sitting on a padded red chair in the back of the chapel of St. Martha’s Guesthouse after Mass, just like any ordinary parishioner in church. He is by himself, simply oblivious to his surroundings, looking up at the altar in quiet prayer. He, who was elected pope, in his humility, decided not to sit upon Peter’s throne, but to sit in the pews along with the rest of us, recognizing the he, like us, are on a faith journey and that it is one we cannot make alone. And in this respect, he echoes St. Augustine: “For you I am a bishop, with you I am a Christian.”

Joseph McAuley
Show Comments (
1
)
Comments are automatically closed two weeks after an article's initial publication. See our comments policy for more.
6 years 7 months ago
When a pope is elected, a king or queen is crowned, a president is inaugurated and so on we tend to focus on what he or she will do for us. I never had that thought about Jorge Bergoglio. That night on TV watching him bow before the church assembled in St. Peter's Square brought me right into the center of the Church. I was being asked by his very appearance to pray for him, to bless him, to in other words be a giver not just a receiver. That's how I think grace works. And even though it's Lent and the "A" word is liturgically silent I say on the side lines -- ALLELUIA!