Faculty and Students Are Walking Out Today for Catholic Identity 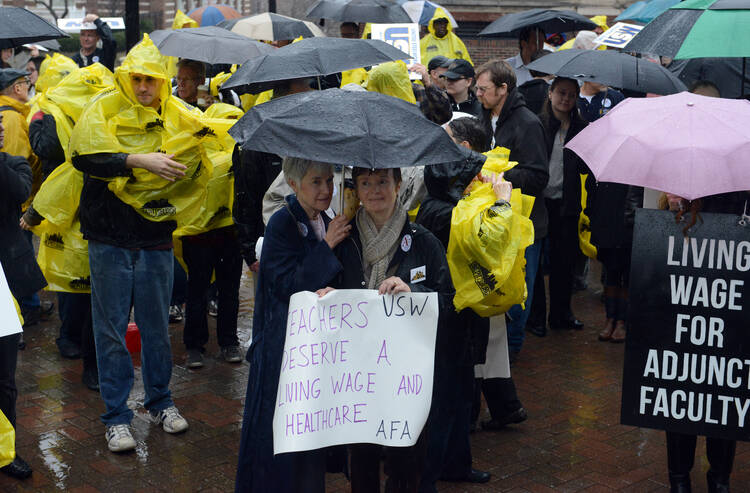 When Catholic schools boast about “Catholic identity,” they’re usually talking about things like campus ministries, required theology courses, and Barack Obama. Despite the church’s trenchant teachings on the subject—which stand in sharp distinction to the current U.S. political climate—the rights of workers to organize is not usually part of this list. In fact, it is lately more common for Catholic universities to claim that honoring the rights of workers is an affront to their religious identity. As Clayton Sinyai wrote in his recent article for America, “Which Side Are We On?”:

Duquesne and the other Catholic universities adopting the same position (including Seattle University, St. Xavier University and Manhattan College) are trying to occupy an almost inconceivably narrow conceptual space. They are at once claiming to be too religious to be subject to enforcement action by the N.L.R.B. yet not religious enough to honor their adjuncts’ right to organize out of simple fidelity to Catholic social teaching[.]

Thanks to a 1979 Supreme Court ruling, that is, religious schools can claim an exemption from recognizing faculty who seek union representation. As a result, Catholic administrators using the same basic legal and rhetorical argument about religious freedom that they’ve been using against Affordable Care Act mandates to deny the religious freedom—the freedom to organize for dignified work—of their own employees. This is an astonishing feat of cynicism. Worse, it comes in the midst of a national crisis in which university faculty, and the students expected to learn from them, are increasingly working with intolerable wages and unsustainable conditions. Rather than taking the moral high ground, many Catholic schools are taking advantage of a legal loophole to lead a race to the bottom.

Today, faculty and students at Catholic campuses are joining their counterparts on campuses around the country in National Adjunct Walkout Day. At Seattle University, Dan Peterson is participating because, he says, he wants to see the administration “put students first by giving faculty the resources to do so—a long tradition in Jesuit education.” Peterson, a Lutheran theologian with two degrees from Jesuit schools, is taking care that the walkout has minimal impact on his students; it will occur at noon, twenty minutes before the end of one period, and he will offer four hours of make-up time. After his repeated efforts to bring complaints to the administration have been ignored, he believes collective action is necessary. Peterson currently holds a second job in order to support his teaching.

The petition associated with the Seattle University walkout, posted on the website of the Service Employees International Union, echoes his experience:

Contingent faculty members have been working hard for the past few years to develop a strategy for making their concerns, and our concerns, known. All attempts thus far have been ignored, and unionization has been actively contested by the university administration. The legal process, although drawn-out by the administration’s efforts, has resulted in a favorable decision for our faculty. That being said, this same administration appears committed to blocking efforts to change the status quo at any level.
Even with this opposition, we know we can win.

At John Carroll University in Ohio, where another organizing effort is underway, the walkout statement reads:

As students, adjunct faculty, full-time faculty, contract workers, direct employees, community members, and alumni, we call upon John Carroll University to immediately implement a Jesuit Just Employment Policy recognizing all campus workers’ right to a living wage, fair and equitable pay and benefits, a safe and just work environment, and the freedom to organize to form unions without any employer interference or retaliation.

This call for a “Jesuit Just Employment Policy” evokes the model of Georgetown University, where administrators chose to remain neutral and allowed a successful adjunct union-drive to proceed. Georgetown’s behavior should be the bare-minimum norm for Catholic institutions, not the sterling exception.

Yet the ironies pile on. The National Labor Relations Board has recently ruled against several institutions seeking to oppose unionizing by questioning their fealty to Catholic identity in the first place. Administrators then react with frenzied affirmations of Catholic identity precisely in order to continue evading their responsibility to Catholic social teaching. The more messy the situation becomes, the simpler the answer seems. The best way of affirming Catholic identity is surely to actually practice it—by letting faculty organize.

Thank you for these contributions to the discussion! You raise some really valuable points, I think.

In particular, I'm interested in the points you raise about independent unions, and unions in alignment with the church. That is indeed an appealing alternative. But at present it also asks a lot of workers who are already quite vulnerable and strapped for time. National unions have the capacity to help them mount an election; until Catholic organizations are willing to provide similar support, I think it is reasonable for these workers to collaborate with an organization like the SEIU. I for one would be very eager to revive labor institutions grounded in Catholic values, and would eagerly support them.

A critical fact here, also, is that these schools employ a great many non-Catholics, and serve non-Catholic students, and experience a host of benefits from running a non-profit educational institution in the United States (such as government grants and subsidies). If the institutions want government immunity from labor law on the basis of their theological commitments, it seems appropriate for the government to investigate those theological commitments to see whether they are truly at play in the workplace. If the institutions don't want that scrutiny, they should not attempt to take advantage of the exception. Catholic institutions take advantage of the talents of non-Catholic staff, and I think it is problematic to subject those staff to an environment where they don't have the same rights that they'd have at a similar secular institution. I would argue that the priority for Catholic identity, here, is taking a position of leadership against economic injustice in the larger society, not simply circling the wagons and pretending to declare independence from the society of which these universities are already very much a part.

You raise the question of economic effects, too. This is an important question, and there's surely a rich discussion to be had about how the budgetary priorities of Catholic institutions might differ from secular counterparts. But I think a non-negotiable bottom line should be providing dignified working conditions for all workers. If doing so requires sacrifice in other areas, so be it. Hopefully Catholic identity will provide sufficient solidarity and support to make up the difference.