Evangelizing Japan: A Letter from an American Jesuit in Tokyo 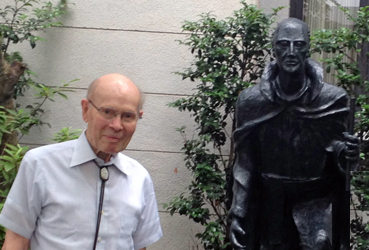 While writing my recent column, "The Moviegoers," which told a story of differing approaches to evangelization of Western culture, I was reminded of a recent experience on the other side of the world. This past June I spent a week in Tokyo where I had the chance to speak with some of the Jesuits at Sophia University. It was especially fascinating to get a window into Japanese culture from two US Jesuits, Bill Currie and Bob Deiters, who have spent 54 and 62 years respectively in Japan.

I've talked about my time with Bill Currie SJ more extensively on America's blog and podcast but given my comments on evangelization and the recent stories about Japan's continuing economic challenges my interactions with Fr. Bob seemed particularly relevant.

A Cincinnati native, Fr. Deiters, 89, arrived in Japan just as General MacArthur's occupation was ending in 1952. I had a host of questions for Bob:

Fr. Bob graciously offered to answer my numerous questions via email. I've reprinted his comments below.

In 1952 when I arrived in Japan as a 27-year old Scholastic, the image I had of the mission in Japan was only from short articles in The Field Afar (now known as Maryknoll Magazine).  The Japanese were suffering from poverty and war damage; their shattered confidence in the leadership and national goals left them open to ideology that promised peace and harmony. Both Communism and Christianity showed a new way. The "Occupation" ('45 to '52) under Gen. MacArthur encouraged Christian missionaries to come to Japan. The response of both Protestant and Catholic churches became a veritable tidal wave. The Jesuits alone were sending, mostly from Europe and the Americas, 20 young men per year from '47 to mid-sixties. There were many conversions, and the missionaries built churches all over Japan with small but growing congregations.

Sophia University was adding on new faculties (colleges) and many of us were sent for doctoral studies in fields opening up at Sophia. I came on that scene with a degree in electronic and computer engineering just as a new faculty of Science & Technology was beginning in the early '60s. Working together with almost all non-Christian colleagues and students, I saw myself as a collaborator and friend in forming the culture of Japan.

By the time of the Tokyo Olympics ('64) Japan had recovered economically and psychologically, but conversions were fewer, and many earlier baptized no longer practiced. Nevertheless, a solid core of priests, sisters, and faithful had developed. Many of the foreign missionaries, with limited ability and opportunity for direct evangelization, contributed greatly to forming this solid core.

Japanese, culturally and aesthetically developed, have vague religious beliefs. Institutional religions are generally suspect, and the world news about conflicts in which groups characterized as Catholics, Protestants, Muslims, Hindus, etc. are reported to be pitted against one another, together with the local scandalous news about some small religious groups, feed their suspicions.

On the other hand, Christianity is respected for its great heroes known in the popular culture such as Jesus, Mother Teresa, John Paul II, Francis of Assisi, Albert Schweitzer—lately Pope Francis. The educational institutions such as Sophia founded and originally staffed by missionaries are highly valued.

Pre-war in East Asia, a single Jesuit Province would support one "mission" area, for example, Chicago Province supported Patna mission in north India, the North German province supported a small Sophia University in Japan. Now the single language-cultural mission regions have become full Jesuit provinces, and the Jesuits in each are an international mix with natives of each country at the core.  The ex-pat "missionaries" in each of these provinces is a mixture with more and more Asians among the older Europeans and Americans. Jesuit leadership has been developing more and more cooperation in East Asia.  Younger Jesuits are sent for studies, meetings, and formation to experience another region, and to learn English, our common language. The mission of each and all of us is the evangelization of East Asia.

I myself, after mandatory retirement from Sophia at 70, took responsibility for the community of recently immigrated Chinese Catholics. (See  http://www.jesuitsocialcenter-tokyo.com/eng/?page_id=3181 for a short report I wrote recently.)

P.S. I have been a personal subscriber to America for abut 40 years. It is my main link to the Church and the U.S. cultural and political scene.