Ethnic Cleansing in the Sudan: An Interview with Bishop Macram Gassis, M.C.C.I. 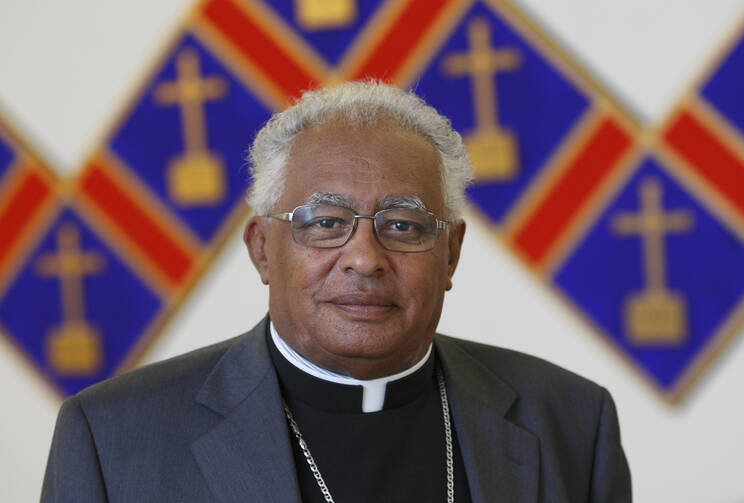 The Most Rev. Macram Gassis, M.C.C.I.,retired last autumn as bishop of the El Obeid Diocese in southern Sudan, North Africa. He served as bishop from March 12, 1988 to October 28, 2013. He is a Sudanese-born member of the Comboni Missionaries of the Heart of Jesus. Now an international human rights spokesman for his diocese, where conflict between government and opposition forces is causing food shortages and forced migration in addition to medical emergencies, he was in New York City in July for consultations at the United Nations and to do humanitarian aid fundraising.

On July 24, I interviewed Bishop Gassis by telephone about the human rights situation in Sudan. The following transcript has been edited for content and length.

How would you describe the situation in southern Sudan right now?

Well, southern Sudan is a shameful situation, even though after so many years of oppression and discrimination—even numerous victims of fratricidal war—they have gained their independence. After all these years, as I wrote to the President of South Sudan Republic and the opposition leader, they are still fighting each other. Who are the victims? The people. It’s always the civilians, particularly the women and children. So the situation is shameful. For these African people who are suffering at the hands of the Arab Islamic north Sudan, they gained their independence, but now they are fighting each other. I think it will take a long time for this wound to heal and it’s not healing right now. There aren’t even signs of it beginning to heal.

You have described the South Kordofan “Nuba Region” to U.N. authorities as being in a state of “humanitarian emergency,” particularly with near-daily bombings in the Nuba Mountains that the government initiated in 2011. What is your biggest human rights concern right now?

Yes, that’s part of my diocese, and I stand up for marginalized people in both the north and south. The south got independence and the Nuba Mountains got nothing. In fact they were granted a meaningless solution known as “Popular Consultation.” That’s a great injustice. The biggest human rights concern for me is to give the Nuba people their identity and their right to self-determination, to save them from their present situation of having no food, no medicine, no vaccination, no scholastic material, no clothing—absolutely nothing. What does the north intend by doing that to them? As we speak right now, the government bombers are hovering over them. But how can you call the leaders in Khartoum a “government” when they came to power by the barrel of a gun? I’m not a politician, I’m just a frustrated and angry shepherd, but it’s a military dictatorship of Arab Islamic fundamentalists imposing their way of life on peaceful African Muslims, Christians and Traditional believers. It’s never really been a government. This is the regime of Khartoum that is trying to subject the Nuba Mountains to their control or else wipe them out.

What’s the current state of Catholic-Muslim relations in the midst of this conflict?

It is more than good, it is very good. In fact, many of the Muslim commanders in the liberation movement of north Sudan respect the church and are helping the church to help the people. Whenever we tell them we need something, they give it to us. So there is a mutual respect and we try to alleviate the suffering of the people together. As far as the Catholics in the north Sudan go, they became unwanted people when the south achieved independence. People now tell them “go back home, you are not Sudanese. You are south Sudanese.” African Muslims and Christians in the north live with a very subtle and substantial discrimination inflicted by the Islamic regime. The relationship of the church with the northern liberation forces is very good. Some people call them rebels, but they are just African Muslims who are standing up for human rights. The Nuba people are multi-religious Africans who live in harmony with each other. They live with unity in diversity, calling themselves “Nuba people” or “mountain people” rather than identifying themselves by tribe. The Arabic north wants to “assimilate” them in what I call an ethnic cleansing.

Do Catholics in your diocese feel safe right now?

The Catholics in the liberated areas of my diocese are definitely free to pray, to practice their faith and express it. But in the northern part of my diocese, they are under the oppression of Khartoum and they are not free.

What’s the status of other longstanding humanitarian concerns in the Sudan, such as forced female circumcisions and child slavery?

Slavery is a fact which the northern Sudanese hesitate to accept and which they even deny. We have children in slavery taken from the Nuba Mountains, boys taken to fight in the army, girls taken as household servants, women taken as instruments of pleasure. What’s coming to the surface now is the killing and humiliation of this ethnic group known as the Nuba people, who are being starved and deprived of medicines by the regime in Khartoum. Politics have the upper hand against humanitarian assistance efforts right now. When I met with United Nations officials last week, I brought this message: Which is more important, to respect the sovereignty of Khartoum to kill its own people, or to save souls? I just read in the Washington Post that the U.N. unanimously approved a resolution Monday to bring cross-border humanitarian aid to Syrians in government-held areas. Why can’t they do the same for the Nuba people?

What do the Sudanese people want the most right now?

They want to be free of the oppression of an Islamic fundamentalist regime. They want freedom of the press, freedom of movement, freedom of education, freedom of creed, freedom to breathe. Even the Muslims in the north want these things. The Nuba is an ethnic race whose human rights must be respected. Human rights are not the monopoly of any government. They are natural rights, divinely guaranteed rights that must be defended by legitimate government. It’s not the church’s job to make the decision to do that. The church can only try to see that their human rights are recognized and respected.

What’s your greatest hope for the future?

My greatest hope now is the immediate salvation of the Nuba. Give them food, medicines and vaccines, educational material, water sanitation. Let’s save them. That’s the immediate concern. The northern regime made a statement at the embassy in Nairobi that it has never targeted civilian targets. But they bombed my hospital. Thank God, there were no victims, but there were two persons injured and the building was damaged. They threw five bombs at my hospital and say they’ve never targeted hospitals. They bombed Holy Cross Catholic School and killed 15 little children and their teacher. Khartoum’s war planes dropped more than a thousand bombs between May and June. They’re not bombing the liberation army, but the civilians—the women, the children, the elderly, and the civilian people. Khartoum is a regime that has never honored any domestic or international agreement. We need to stop dropping bombs, we need to open aerial and land corridors for humanitarian aid to reach the population and we need the two belligerent groups to seek a solution at the negotiating table. These are the three things I’m asking for. But the most important thing is to stop the aerial bombing. It is causing so much suffering.

Why are the Nuba people no longer on the agenda of the international community? Why are we ignoring this beautiful segment of the African population, allowing it to be destroyed by the Arab Islamic regime in Khartoum? If you kill elephants, it’s a loss that bothers many people. How much greater a loss is it for us to wipe out an entire people?

We have more than 1,000 children in Catholic schools in the area being bombed. There are no government schools. Only the Catholic Church is involved in that area. By Arabizing people in the Nuba Mountains through education, Khartoum is Islamizing the Sudanese people into an Arabic form of Islam that forces “the real Koran” on African Muslims and Christians. In our Catholic schools, we don’t force our African Muslim kids to become Catholic or study catechism, but that sort of thing is happening in the Arabic government schools right now. The government schools in the north force our Christian students to study Islam.

In the middle of all this, we in the liberation movement have a responsibility for creating the future of the Nuba and the future of the church. As Catholics, we don’t force our faith on others, but we see to their basic needs. Their first basic need was water. Water is life and we started by ensuring that wells with drinkable water were in schools and villages. Next was the education and formation of these children who were just roaming around, taking care of cattle. So we built schools and succeeded. Then we built Mother of Mercy Referral Hospital to help meet the needs of the people particularly for surgery. I took the risk and built a hospital for 80 beds that is now filled with 300 beds full of people wounded by bombings and landmines. That hospital became a beacon of hope to the people, a reality of love among hate, a reality of healing not killing. The Islamists bombed it, but it is still there. In my diocese, we’ve met the basic needs of the people, building more schools and hospitals than parishes. I tell my people they are the church and these things are for everybody. This is what gives hope to the people.

Sean Salai
Show Comments (
1
)
Comments are automatically closed two weeks after an article's initial publication. See our comments policy for more.
Frank Gibbons
7 years 6 months ago
Brother Sean Salai, Thank you for posting about the plight of our brothers and sisters in the Sudan. This situation must be made widely known to America and Europe. We must urge our government representatives as well as the media to speak up for these people. I talked with a priest back in the 80s who was stationed in the Sudan. This persecution has been going on for a long time. We need to pray daily for these persecuted and forgotten Christians -- intercessory prayer is effective and is a spiritual work of mercy. Jesus prayed for us (John 17) and we emulate Him when we pray for others. Of course, we can also offer humanitarian aid through CRS and other organizations.