Elections in Zimbabwe: A Special Report 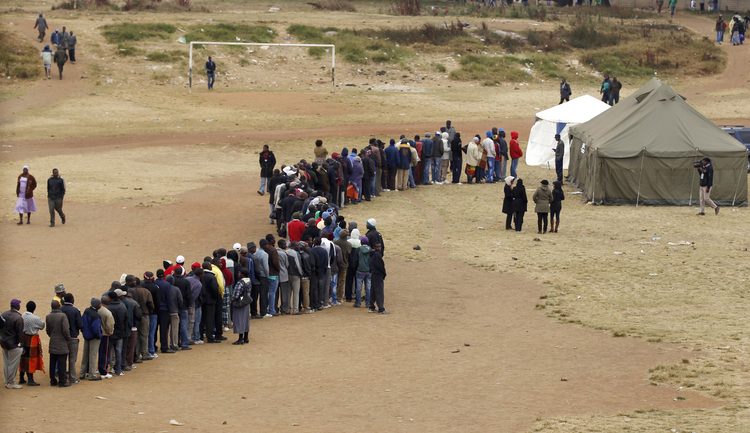 On July 31, 2013, Zimbabwe held “harmonised elections.” They were called harmonised elections because voters elected three candidates for office on one paper ballot: councillors, house of assembly and president. Of the 210 seats in the house of assembly 160 were won by ZANU PF, a revolutionary party that has been in power for more than 33 years. The Movement for Democratic Change (MDC), formed in 1999 by a combination of labor, civil society and student movements, won 49 seats in the house of assembly and an independent candidate won one. In the presidential race, Robert Mugabe of ZANU PF obtained more than two million votes and Morgan Tsvangirai obtained above one million.

Many have asked the questions: were the elections free and fair? Were they credible? Where they peaceful? Thankfully the elections were peaceful and, to some extent, fair because there was some privacy in the process of marking the ballot. But the verdict on an electoral outcome should be based on a combination of factors, including registration, voter rolls, special voters and the pre-election environment.

The pre-election period is usually defined as a period between the day when Election Day is announced and the day before elections. The period is marked by political campaigns, where political parties mobilize individuals and communities for support. But in Zimbabwe, mobilization for political support, especially by ZANU PF, started in 2009 after the establishment of the Government of National Unity (GNU). The other political parties, such as MDC, were busy seeing to it that the terms of the Global Political Agreement, which allowed for political power sharing in Zimbabwe, were implemented. This made it difficult for them to really establish themselves, especially in rural areas.

Unlike the period before the 2008 run-off elections, where there was overt violence and conflict between different political party supporters, the July 31 pre-election period in Zimbabwe was characterized by covert, but effective intimidation strategies. As early as 2011, some traditional leaders, especially chiefs and village heads who were put under the government payroll, periodically organized meetings with villagers, sometimes forcefully, instructing them to vote for their political party. Known political opponents would be denied, for example, food handouts. This made life difficult, especially for poor rural households that struggle to make ends meet.

Intimidations became more pronounced as the country approached elections. In 2011, for example, a war veteran leader stayed in Masvingo Province for almost a year, holding meetings with traditional leaders and community members telling them that “hell will break loose” if they vote for any other political party. His main message was: “We will kill those who will not vote for us… we will displace those who do not vote for my political party.” Some of the campaign messages reinforced these intimidations. For example, some voters were promised that if “you vote wrongly and if you do not vote for us, we will do more than what we did in 2008.”

At least 49 days were provided for the registration of voters. To accommodate those who had not registered, the Zimbabwe Election Commission extended registration of voters to 12 midnight on the last day (July 9). At the end of registration, voting population stood at 6.2 million or 49.2 percent of the country’s 12, 973,808 people. There was a general feeling that there was not enough time for people to register. Some pointed out that registration centers were crowded in rural areas.

There is also a general belief that Zimbabwe’s voter roll is seriously flawed: it contains names of dead people, has double entries and includes names of people who are no longer living in the country. Of course, no voter roll is perfect, even in mature democracies. Even if there are double entries, it is not easy for people to vote twice due to the indelible ink system. Those who are dead cannot vote, and neither can those in the diaspora! But the main concern raised was that Zimbabwe’s voter roll, no matter how bad it was, should have been made available as a public document.

Special voters are people who will vote during designated days because they will be deployed to carry out duties on polling day away from the ward where they are registered to vote. Zimbabwe’s Special Voting (SV) process conducted on the July 14 and 15 did not go on well due to shortage of voting materials—ink, ballot papers, ballot boxes, etc. Many people who had applied for permission to cast a special vote did not vote. The law states that if a person applies for special vote and fails to vote on the special voting days, that person automatically loses their right to vote on the Election Day. But ZEC appealed to the Constitutional Court and was granted permission to allow those special voters who did not vote on their scheduled days to vote with others on July 31.

It is not easy to pronounce a verdict on our elections without attracting condemnation. Is a fair and credible election possible? If elections are generally peaceful (especially on Election Day), can they be regarded as fair, free and credible? Should we consider the pre-election environment as we seek to evaluate election results? Democratic countries are largely defined by holding regular elections. Can Zimbabwe be described as such?

Arkmore Kori is the national coordinator for the Catholic Commission for Justice and Peace in Zimbabwe (CCJPZ). He is writing in his own personal capacity. This article does not reflect the views of CCJPZ or the Catholic Church of Zimbabwe.

This article has been revised to reflect the following corrections:

An earlier version of this article misstated the results of the recent elections in Zimbabwe. ZANU PF won 160 seats in the assembly, not two thirds. MDC won 49 seats, not 58. And an independent candidate won one seat.