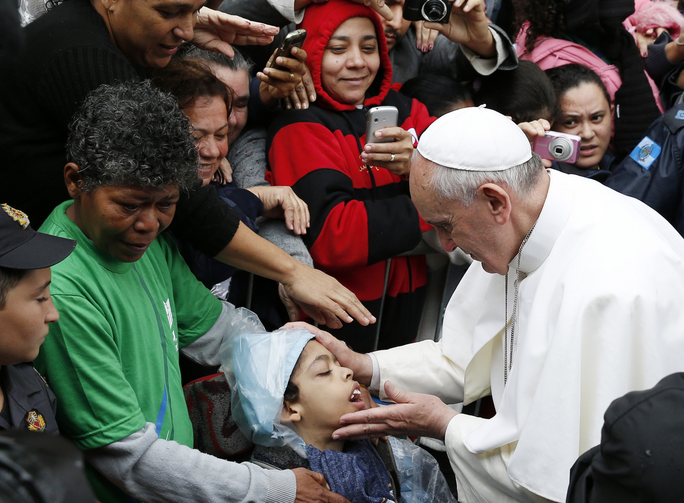 One of the many history-making features of "Laudato Si'" is that it is the first encyclical fully conceived and completed by a non-European. (Pope Francis’ previous encylical, Lumen Fidei, was largely written by his predecessor, Pope Benedict XVI.) What difference does this make?

It comes from a Third World pope. As Jorge Bergoglio, Pope Francis’ life and ministry were marked by global capitalism and authoritarian communism fighting for control over his native Argentina. He saw firsthand how both ideologies left the poor in misery. Argentina suffered crippling economic crises as it attempted to play by the rules that richer countries put in place. This encyclical speaks from that history. It was initially drafted by Cardinal Peter Turkson of Ghana, making it a landmark testament to the world from Catholics of the Global South.

It transcends Cold War binaries. Although some commentators have labeled Pope Francis a communist, what he offers is a refreshing departure from the ideological boxes that plague the rich world’s discourse. He opposes an economy based on short-term corporate profits while embracing the creativity and productivity that markets encourage. He stresses the divide between haves and have-nots, but calls for dialogue rather than class struggle. Above all, he opposes the idolatry of any ideology that puts itself before the well-being of human beings and creation.

It foregrounds the experience of the poor. Both the environmental movement and its opponents often seem to be purusing a theoretical and boutique cause, reserved for the wealthy and highly educated. Pope Francis frames his teaching with the perspective of the world's poor, for whom the climate crisis is not a future possibility but a present reality. He identifies the “ecological debt” that the rich owe to the poor for the effects of their relentless consumerism.

It places the commons over property. “God rejects every claim to absolute ownership,” Pope Francis writes. While the world’s rich justify their pollution on the basis of property rights, Catholic tradition upholds private property only as long as it fosters stewardship for the common good. The world is first of all God’s gift to everyone, and property cannot be used to withhold the necessities of life from the many for the enrichment of the few. “The climate is a common good,” he reminds us, “belonging to all and meant for all.”

It says what is unsayable in U.S. politics. The climate crisis has been virtually a non-issue in Washington, thanks largely to the influence of the energy lobby. "Laudato Si'" breaks this silence, and it calls public officials to step away from the sidelines. It doesn’t offer particular policy proposals so much as it invites everyone into a common dialogue. It also gives voice to the concerns of Latino Catholics, who are far more concerned about the environment than their white counterparts, but who have often gone unheard.

It takes both Catholic tradition and science seriously. However radical this document may seem, it falls squarely in the mainstream of both the scientific community and Catholic tradition. Much of what Pope Francis says here has been said or alluded to by previous popes, and he cites his predecessors going back to Paul VI in the preface. Regarding scientific claims, he respects the authority of scientists who speak from their expertise and takes it for granted that Catholic faith must be consistent with the deliverances of reason.

It speaks of relationship rather than dominion. Knowing that biblical passages can be used to justify a narrative of human “dominion” over nature, Pope Francis shows that those same passages, and many others, call us to relationship above all. He outlines an “integral ecology,” one centered on the sanctity of human life, while recognizing that human flourishing depends on the flourishing of the environment of which we are a part. Like the African concept of ubuntu, he sees the dignity of humanity expressed in our relationships—to our Source, to each other and to creation.

It insists that we can make a difference. This is the first encyclical addressed not just to bishops, or to Catholics, or even to “all people of good will,” but to “every person living on this planet.” Pope Francis does this for a reason. He concludes that we can rely solely on neither the state, nor an invisible hand of the market, nor the wonders of technology can solve the climate crisis for us. He calls on each of us to recognize our own sins against creation, and to repent, and to reorient our lives toward a healthier kind of relationship. This means not choosing one form of consumerism over another, but directing our resources toward a different kind of economy altogether—one based not on short-term profits but on long-term flourishing. We’ll disagree about how to do this. And it is not a temporary matter of somehow saving the world and then being done. This encyclical will be a lasting part of Catholic teaching, and it calls us—now and always, wherever we are in the world—to deepen our relationship with our crucified planet.