Dispatches from the Outer Banks 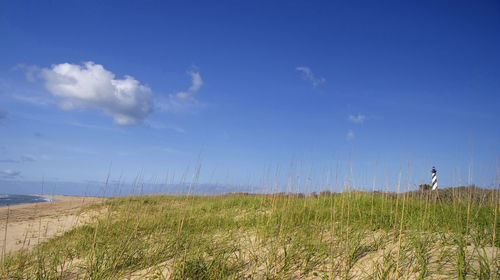 It turns out that my week of blogging for America is this week when our entire family is on the Outer Banks of North Carolina. Our family has grown from a bunch of kids and us in an overloaded van fighting traffic to get to a townhouse that seemed a lot bigger and closer to the beach in the realtor’s brochure. We now number 12 ...four adult children, spouses and “friends” and two grandchildren. This is a lot better. The traffic is still brutal, but the kids drive themselves. They help pay for a bigger place, but it still farther from the beach than it seemed on the web. However, your adult children turn into nice people after they emerge from the tumult and testing of adolescence. They marry nice people and then they have these amazing little people called grandchildren. They play with their “PaPa and Grandma” and return to their parents when they cry. Figuring out nap time is a hell of a lot better than wondering what time your college age kids will return after a night of “fun” at the beach. All this is to explain why there will be no deep thoughts from this blogger this week.

My different take on church and state can be found in my recent column in the magazine. Pope Francis’s amazing trip to Brazil for World Youth Day and related activities has only reinforced the contrast I tried to describe between the spirit of hope and change in the church versus the sense of paralysis and partisanship in Washington. While many of the papal talks in Brazil are powerful, if you have not read Francis’ address to CELAM (the Latin American Episcopal Conference) you should. It is a rich, detailed and challenging agenda for the future of the church under Pope Francis. His description of “missionary discipleship” (the new “new evangelization”), his call for a church close to the people that is tender and merciful, and his specific warnings against four kinds of destructive ideology are previews of themes to come. Likewise his visit to the people who live in the Varginha slum was a model of humble solidarity with the poor and a stark challenge to those in power.

The pope’s amazing hour and twenty minute news conference on the way home from Brazil and his modest and compassionate response “who am I to judge?” have overshadowed some of the messages articulated on the trip, but these themes provide future directions for those who wonder where Pope Francis is taking the People of God.  Dave Gibson, the former editor of Origins at Catholic News Service, has a very insightful summary of the trip which parallels and extends America’s great coverage and John Allen’s superb reporting and analysis on all things Vatican.

One other piece worth reading… at the beach or at your desk… is  E.J. Dionne’s recent and insightful Washington Post column. E.J. analyzes a major study about the intersection between faith, economics and partisan alliances conducted by the Public Religion Research Institute and the Brookings Institution. He not surprisingly warns Republicans about narrow and ideological distortions of the role of religion in public life. Of greater significance is his blunt challenges to Democrats and progressives to not ignore, marginalize or disrespect religious perspectives or people of faith in public life.

Some Republicans like to use religion for their own partisan purposes and ignore its challenges to defend the poor, pursue peace and care for creation (…sounds like someone named Francis). Some Democrats and leaders on the left are embracing an increasingly narrow secular strategy and agenda that could leave little room and no real voice for believers who insist their faith calls them to work for justice and defend human life and dignity. Republicans are now struggling to overcome their problem with Hispanic voters because of how they talk and act on immigrants and the diversity of our nation. Democrats could find themselves trying to overcome some rhetoric and priorities that suggest to believers their religious values and voices are not really welcome or important in the Democratic Party or progressive movements. A particular test is how religious ministries and individuals are treated when they differ with secular orthodoxy on abortion restrictions or same-sex marriage. However, the study reports surprising common ground on some economic issues like the increasing the minimum wage.

Now back to the grandkids…and worrying about the weather, the icemaker and when I have to go home...

John Carr
Show Comments (
1
)
Comments are automatically closed two weeks after an article's initial publication. See our comments policy for more.
Philip Boese
7 years 11 months ago
It seems to me the federal government is too dysfunctional for a reasonable person to only consider which of the two parties to vote for. I believe any meaningful change from the rule of the wealthy, bankers, and corporations will require the election of people not already entangled in the money of corruption. The status quo is very firmly set in place so change will be extremely difficult, but perhaps enough workers and taxpayers are fed up with the mess we've got. At the very least, I cannot see why this movement to get corrupting lobby money away from Congress isn't wildly popular. www.anticorruptionact.org