Some new pilgrims to Assisi don’t profess the Christian faith. And that is perfectly alright. 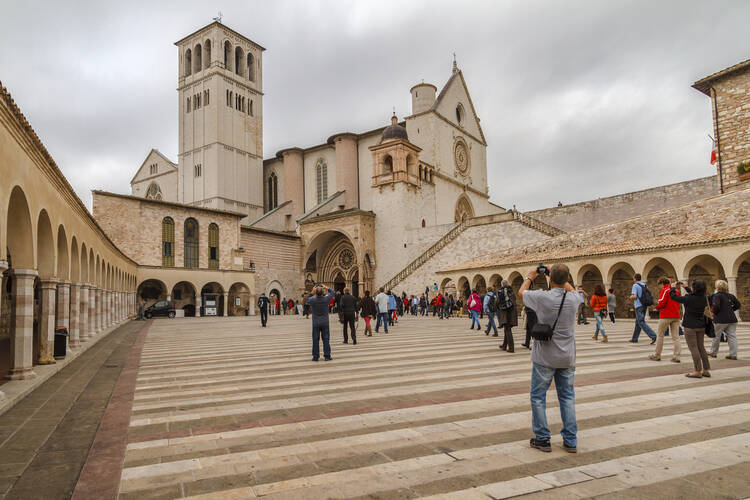 One of the most frequent conversations I have with strangers after they learn that I am a Franciscan friar is about the uniqueness of Assisi. Every year, millions of people flock to the medieval home of Francesco di Bernardone (better known as St. Francis of Assisi to most of us) located in the Umbrian Region of Italy on the western side of Mount Subasio. When I encounter some of these past visitors, they often share their impressions of the place as something like going back in time or encountering a particular peace found nowhere else. These people are usually Catholic Christians who have visited Assisi as part of a pilgrimage, though this is not always the case.

Because I have never met someone who, having shared that he or she has visited Assisi with me, did not then go on to discuess the tranquility and distinctiveness of the town, I wasn’t at all surprised to read about the increasingly diverse demographics represented in visitors to the town. In a New York Times travel-section article titled, “In St. Francis’ Hometown, a New Kind of Pilgrim,” journalist Nina Burleigh highlights some of what she characterizes as the atypical crowd now showing up in Assisi.

Admittedly, there is something initially jarring about the idea that Assisi could become a “destination” for luxury spa and resort goers. Then again, an intentional attitude of universal welcome seems to align well with the spirit of a town whose most-famous citizen was known for welcoming all of God’s children: human and other-than-human creatures, saints and sinners, the wealthy and the poor, Christians and Muslims alike.

Those who have personal experience visiting Assisi know of its extraordinary spirit, imbued it seems with the historical memory of Francis and Clare. Although there are dozens of gift shops and restaurants all on some level interested in capitalizing on the town’s Franciscan heritage, this has not—at least to me—ever really interfered with the experience of peace and reverence present among those standing on, near, or in the cobblestones, ancient walls and churches. Contrast this with many other pilgrimage sites, including the hustle-and-bustle of Rome. It appears that even more people are drawn to this exceptional place.

That some of these so-called new visitors to Assisi don’t profess the Christian faith, well, that is perfectly alright. As Fr. Enzo Fortunato is quoted as saying in the Times article, “Francesco’s Assisi has always represented the welcoming of diversities.” Given the inclusive vision of St. Francis’s Gospel worldview, it should come as no surprise that those who run retreat centers in Assisi, such as the Franciscan Sister named Susan quoted in the article, share that, “We are open to people of all traditions—strangers or seekers.”

Assisi has long been a location for interreligious hospitality and dialogue. One may recall St. John Paul II’s October 1986 “World Day of Prayer for Peace” held in Assisi with religious leaders of 32 Christian denominations and 11 different religions. Or, perhaps one may think of Michail Gorbachev’s surprise visit to Assisi and time of quiet reflection at Francis’s tomb.

Those who profess a faith other than Christianity, or who profess no tradition at all, should always be welcome in Assisi. That so many different people continue to be drawn to this Umbrian town reflects more about that special, enigmatic character of Assisi attributed to its beloved son, Francis, than it does anything else.

And I believe that Francis would approve of these visitors, provided they take to heart what he told his brother friars in our Rule. Namely, that whatever we do should not “extinguish the spirit of prayer and devotion” in our lives (and by extension, in the town of Assisi as well).

Perhaps the only thing in this Times article to which Francis would object is the mistaken reference the author makes to Franciscan friars as “monks.” Francis’s whole vision of Gospel life and ministry was less about the fuga mundi of monastic life and more about being close to all people wherever they are found. For that reason, were he alive today, he might very well be greeting these new pilgrims in the street.