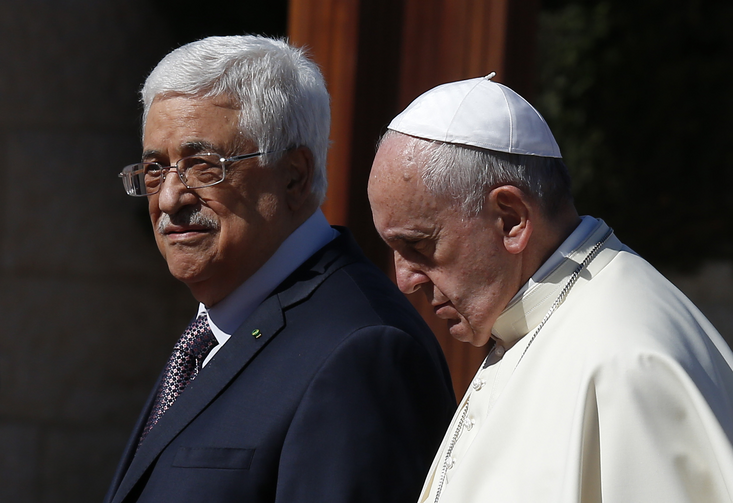 Popes pray for peace; it is part of their ministry. And when war is raging or peace negotiations seem hopelessly bogged down, recent popes have invited leaders of other Christian traditions and other faiths to join them in prayer.

Pope Francis has put a twist on the interreligious prayer gathering by inviting political leaders, Israeli President Shimon Peres and Palestinian President Mahmoud Abbas, "to come to the Vatican to pray together with me for peace." The event was scheduled for June 8, the day many Christians celebrate Pentecost.

That is not the same as ignoring religious differences or pretending those differences do not matter.

"It should be evident to all who participate that these occasions are moments of being 'together for prayer, but not prayer together,'" said guidelines for interreligious dialogue published in late May by the Pontifical Council for Interreligious Dialogue.

"Being able to pray in common requires a shared understanding of who God is," the document said. "Since religions differ in their understanding of God, 'interreligious prayer' -- meaning the joining together in common prayer by followers of various religions -- is to be avoided."

The distinction between praying together and praying at the same time is one Vatican officials have found increasingly necessary to emphasize as popes have led more and more interfaith gatherings for peace.

St. John Paul launched the interreligious prayer for peace gatherings in Assisi in 1986. He asked Catholic, Orthodox, Muslim and Jewish leaders in particular to join him in Assisi in for a smaller gathering in 1993 as war raged in the Balkans. And, in the aftermath of the 9/11 terrorist attacks in the United States, he and other religious leaders returned to Assisi in January 2002 to pray and proclaim to the world that violence committed in God's name is an abomination.

Pope Benedict XVI was one of a few Vatican officials who decided not to attend the 1986 Assisi meeting and voiced concern about how it might appear to downplay important religious differences. However, he marked the 25th anniversary of the gathering with his own invitation to religious leaders -- and secular humanists -- to join him in the hometown of St. Francis in 2011.

The commemoration included a public moment of silence and a "solemn renewal of the commitment to peace," but no public prayers.

The next day, back at the Vatican, Pope Benedict told the religious leaders: "Meetings of this sort are necessarily exceptional and infrequent, yet they are a vivid expression of the fact that every day, throughout our world, people of different religious traditions live and work together in harmony."

And, sometimes, while not praying together, they pray alongside each other.

Visiting Istanbul's Blue Mosque in 2006, Pope Benedict and an imam stood in silence, facing Mecca. Reflecting on the moment a few days later, the pope said, "divine providence allowed me to make a gesture that initially was not foreseen, but which, in the end, turned out to be very significant."

"Pausing a few minutes in recollection in that place of prayer," he said, "I turned to the one Lord of heaven and earth, merciful father of all humanity" and asked that "all believers recognize that they are his creatures and give a witness of true brotherhood."

The witness to brotherhood was a key point for St. John Paul in 1993 when the conflict in the Balkans shocked him and other Europeans who believed war on the continent was a thing of the past. The pope invited representatives of the predominantly Orthodox Serbs, Catholic Croats and Muslims from Bosnia-Herzegovina to join him in Assisi.

In the face of violence and war, St. John Paul told the religious leaders, "we cannot help but use the resource of believers; that resource is prayer. This is our strength; this is our weapon. In the face of instruments of destruction and death, in the face of violence and cruelty, we have nothing other than recourse to God with our words and our hearts. We are not strong or powerful, but we know that God will not ignore the pleas of those who turn to him with sincere faith, especially when the present and future fate of millions of people is at stake."

The pope and his guests first met together to listen to the experiences of refugees and others who had experienced the war first hand. Then, for the prayer, the Catholics went into the upper Basilica of St. Francis, and the Muslims and Jews went to separate rooms in the Franciscan convent attached to the church.

Meeting together and praying at the same time for the same intention, "in itself will be a living witness and a happy foreshadowing of the gift we intend to request," St. John Paul said. "Each of us came here motivated by fidelity to our own religious tradition, but also knowing and respecting the traditions of the others."

"May peace reign among us," he said. "The differences that separate us will remain," but coming together will let others see that "the secret of a humanity finally reconciled lies only in mutual acceptance of the other and, consequently, with mutual respect deepened by love."