Cambridge, MA. On Easter Sunday, Sri Sathya Sai Baba (1926-2011) died in India at aged 85. The accounts of his death are many in the Indian press, and will increase as the day of his funeral, a state affair, approaches. (Just google “Death of Sai Baba” and you will see.) Professor Tulasi Srinivas of Emerson College here in Boston just published a fine scholarly study of the movement surrounding Sai Baba, Winged Faith: Rethinking Globalization and Religious Pluralism through the Sathya Sai Movement(Columbia University Press). And today, she sent us all an email about his life and death, and has kindly given me permission to quote from it here:

“Shri Sathya Sai Baba’s life was extraordinary by any description. Born Sathya Narayana Raju to a poor peasant family on November 2, 1926, he became a nationally recognized guru and mystic who counted leading Indian politicians, sports figures and media celebrities as well as the poorest among his devotees. In 1940, he declared himself an "avatar," or reincarnation, of another Hindu holy man called the Sai Baba of Shirdi, a town in the western Indian state of Maharashtra who had died in 1918. In the 1960s and after, riding a wave of popularity in the West he became a celebrated global guru, often providing solace through his twice daily darshan (sacred sighting) to the tens of thousands of devotees, interacting with them, magically manifesting healing vibhuti ( sacred ash) or talisman for those who sought his blessings. Devotees scrambled to get a good seat during darshan often waiting hours in long queues... His devotional base grew to an estimated 20 million in 160 countries around the world and they were predominantly middle class and professional. Sai Baba used his enormous influence to harness this human power to do seva (charitable works) including raising money for educational institutions, hospitals to treat the poor and drinking water to parched rural districts in and around his home town. He grew the Sai Movement into a transnational phenomenon allowing people to remain in the faith they were born into yet offering them hope and solace as his devotees through a strategic set of embedded practices, multivalent symbols and ambiguous performances.

“But he was also the eye of the storm as controversy swirled around him. Skeptics and non believers accused him of being a “mere magician,” using trinkets and conjuring acts to increase faith in him. He never denied the magic but rather claimed that the talismen produced were magical merely a pathway for his larger maya (divine magic) of devotional transformation to occur. In the 1970s a Commission to investigate Miracles and other Superstitions was set up by Dr. H Narasimaiah, the Vice Chancellor of Bangalore University to investigate Sathya Sai Baba. The BBC documentary Sai Baba: Godman or Con man detailed the so called “tricks” but this did not deter devotees and followers. More recently ex-devotees and former devotees have accused Sathya Sai Baba and the Sai Trust of more serious infractions including embezzlement, fraud and sexual abuse of young boys which they claimed culminated in the death of four young men within the ashram in 1996. A series of films and internet websites detail these allegations. But neither Sai Baba nor the Trust were ever convicted of any wrongdoing. Rather Sai Baba and his devotees, on his behalf, claimed that he was vilified in the public arena by disaffected devotees. The Anti Sai movement has been appropriately silent about the current happenings in the ashram.”

It is a real test of interreligious openness to move beyond respect for the scriptures of another religion to ponder a contemporary representative of another tradition. It is one thing to admire famous figures of the past, or to imitate a reformer like Mahatma Gandhi — but quite another to reflect on the meaning of a figure whose power lay primarily in himself, his claim to divine status; it was on that basis that millions have been devoted to him, and perhaps it is impossible for us to respond to Sai Baba in that way. (But read about Fr. Mario Mazzoleni, who left the priesthood after becoming a devotee of Sai Baba — excommunicated, I believe; his book, A Catholic Priest Meets Sai Baba, is most unusual.) 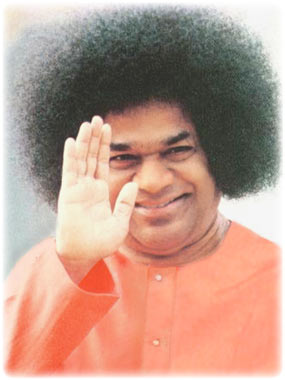 My own contact with Sai Baba was minimal. In 1990, while at a conference in Bangalore, three of us drove up to Whitefield, to visit his afternoon audience. By that time, he had taken a vow of public silence, and so for about 45 minutes he just walked up and down in front to the crowd, giving blessings, touching the sick, receiving notes from especially devout people who were seeking an audience. Though it was not a singular moment, I’ve always remembered the occasion and have been glad that I did go to see him. A few years earlier, when studying here in Cambridge, I knew some students who were entirely dedicated to his message, even allowing him to guide them – by spiritual inspiration and dreams — even in their choice of marriage partners. I was impressed, and a bit worried, by their total devotion. Even earlier, when I was in Kathmandu in 1973, someone gave me some of that divine ash he was wont to produce. I still have the little folder paper containing the ash, even now: it was not something to misplace.

But I will leave to him the last words, gleaned from the Sathya Sai Baba website:

Francis X. Clooney, S.J.
Show Comments (
1
)
Comments are automatically closed two weeks after an article's initial publication. See our comments policy for more.
Robert Priddy
9 years 6 months ago
I must take issue with your statement "The Anti Sai movement has been appropriately silent about the current happenings in the ashram" This is far from being the case. Daily blogs revealed what was going on throughout his illness, covered.up cause of death, pre-arranged funeral (before he was declared dead). Any search on 'Sai Baba deception' would reveal many of the sources. Fr. Mario Mazzoleni, who I knew, WAS excommunicated in a formal document from the Vatican. He believed Sai Baba had cured him of a heart condition, but he nevertheless died of it in 2001 while still in his mid 50s. The words of Sai Baba are not originally his, they are compiled from other Indian savants and even from slogans known on the streets of India. More important is that he certainly did not live according to his words, such as "Help ever, harm never" or "Never criticise anyone, only examine oneself" (He forcibly called his accusers 'demons' in a discourse on Christmas Day - and worse too - search 'Christmas 2000 Discourse'). I was in his ashrams and had interview there over 18 years until I came to learn from a very trusted source of more and more criminal activities by him, which cause a major crisis of faith and a long period of further investigation and reorientation.