A Dark Night in Honduras 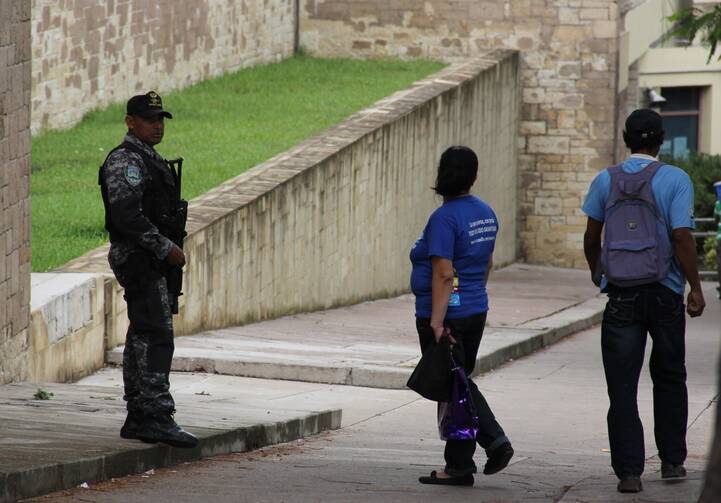 As the plane approached San Pedro Sula airport in northern Honduras, I saw endless rows of African palm trees. A brown river snaked through the fields, and lush green mountains loomed in the background. I did not see any cities, towns or paved roads—just a few housing units. When we landed, I felt joy. This was my first trip to Central America, yet everything felt close and familiar.

The Jesuit family in the United States has a special relationship with Central America, but it is mostly centered in El Salvador, where on Nov. 16, 1989, six Jesuits, their housekeeper and her daughter were killed by government-backed death squads. Ignacio Ellacuría, S.J., the president of Universidad Centroamericana in San Salvador, was among those killed. The witness of his life and death played a role in my decision to apply to the Jesuits, and through his writings I learned a little about El Salvador.

Until recently, however, I knew next to nothing about Honduras. I did not know, for example, that a military base in Honduras served as the operations center for U.S. involvement in the civil conflicts in Central America in the 1980s. A month ago, I could not have named (or pronounced) Tegucigalpa, the capital of Honduras. In 2009 I read about the military coup that deposed President Manuel Zelaya, but I had no idea what unfolded in the country after a new president was elected. I knew that drug trafficking is a major problem, but I did not know that 80 percent of drugs destined for the United States pass through Honduras, and I never would have guessed that Honduras has the highest murder rate in the world (86 per 100,000 inhabitants).

This week I am participating in a delegation to Honduras sponsored by the Jesuits’ national office in Washington, D.C. (My first reflection is posted here.) We traveled mostly along the northern coast—the most violent region of the country—and met with campesinos, community leaders, Jesuit priests and their collaborators. The Jesuits are engaged in a variety of ministries, including a radio station with 1.5 million listeners, a social research and advocacy center, parishes, secondary education and even a community theater. These groups are engaged in political and economic issues, and they have a strong and clear analysis of the problems, who suffers the most and who is responsible. We spoke with dozens with individuals who spoke fluently (and prophetically, in my opinion) about economic inequality, drug trafficking and gang violence, agrarian reform and land recuperation, environmental degradation and forced displacement of campesinos by mining companies, the highest murder rate in the world and the impunity that accompanies it.

The analysis of the problems is clear. The challenge lies in developing an analysis of solutions and how positive social change will actually take place. The people we met with are doing many positive things—popular education, community organizing, spiritual formation, responding to immediate needs, attempting to hold public officials responsible and so on—but the major structural changes required to address the breakdown of civil institutions and the increasing levels of violence remain elusive. There is a sense that the country has been lost. How is it possible to effectively root corruption out of politics and the police force, and rebuild social institutions? When a Jesuit leader was asked if he was optimistic that conditions in the country would improve, he responded through an interpreter, “In this current situation, being optimistic means not having the facts.” When I asked another Jesuit about this, he acknowledged the Jesuits’ limited capacity to respond to the violence. “It is humiliating, frustrating,” he explained. “We are in desolation. Each of us has a creative ministry, but we are overwhelmed by the violence.”

So where does this leave us? Can anything be done?

Whenever we met with individuals or groups, we always asked them what solidarity looked like from their perspective. Many responded that the delegation itself was a significant gesture of solidarity. They can feel isolated and ignored, so it means a lot that an international group, especially one connected with an even larger network of (Jesuit) institutions, would visit them and listen to their stories. This gives them encouragement that their concerns are being heard—and hopefully addressed.

At the level of advocacy, it seems important to keep open a line of communication with the U.S. Embassy in Tegucigalpa. On Thursday our delegation brought the testimony of campesinos and community leaders to the embassy, and the officials asked that we continue to share our human rights concerns with them. For example, they explained that U.S. companies are not mining in Honduras at this time, but some companies have expressed interest. This makes it essential that U.S. officials have a clear understanding of concerns raised by local communities related to forced displacement, the natural environment, public health and protection from further intimidation and violence from mining companies.

The human rights officer in the embassy acknowledged that human rights abuses in Honduras are a “fundamental, systemic problem,” but she said “we are only two people” in the human rights office, and “we are doing what we can.” One delegation member later pointed out that this lack of adequate staffing reflects U.S. priorities in Honduras. It is urgent for Americans call upon public officials in Washington to provide additional staff to help monitor and address human rights concerns in Honduras. Another possible step for addressing these concerns is the presence of an international group like the United Nations, which could help deter the culture of impunity that currently exists within the country. These are small steps, but they could bring some needed relief to those suffering the most in Honduras today.

Luke Hansen, S.J., is an associate editor of America. Here is a photo journal of the experience.