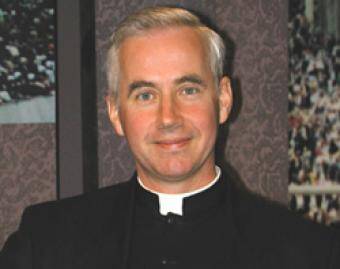 Father C. John McCloskey, a priest of the Prelature of Opus Dei and member of the Priestly Society of the Holy Cross, is a writer and spiritual director based in Menlo Park, Calif. A former Wall Street broker, he holds a B.A. in economics from Columbia University and an S.T.D. in theology from the University of Navarra in Spain. He is also a research fellow at the Faith and Reason Institute in Washington, D.C.

As head of the Catholic Information Center in Washington, D.C., from 1998 to 2004, Father McCloskey became known as the “convert maker” among Beltway political figures. Catholic converts instructed by him at that time included Republican Senator Sam Brownback, publisher Alfred Regnery, former abortion specialist Dr. Bernard Nathanson and the late journalist Robert Novak. He is also a writer specializing in the work of Hilaire Belloc, the 20th-century English Catholic writer. He is co-editor of The Essential Belloc –A Prophet for Our Times.

On July 23, I interviewed Father McCloskey by telephone about his work and writing. The following transcript has been edited for content and length.

When you were working in D.C., you developed a reputation as someone who could discreetly instruct public figures seeking to convert to Catholicism. What was the secret to your success?

God. I would say that my background at an Ivy League school in New York, as a priest at Princeton and as a Wall Street broker at CitiBank or Merrill Lynch in New York gave me street cred of a certain type. Not just with well-known people, but with dozens of other people from similar backgrounds. It made people open to hearing what I had to say—whether they were senators, or businesspeople, or ordinary people.

Did you have personal relationships with any of your political converts before instructing them, or were most of them referred to you from outside?

A lot of these men had been thinking about Catholicism before, and it wasn’t me per se, but the fact that a lot of very smart people—senators and judges—were looking for the truth in their lives. It helped quite a bit that many of these men were influenced by men at their level who were Catholics. In a lot of cases, those friends referred them to me. Then the word got out that I was willing to instruct these sorts of people.

Is there a particularly memorable story from any of the conversions you witnessed that stays with you today?

In many ways, the most moving was that of Bernard Nathanson because of his atheism and application of abortion, and the fact that his conversion took place with Cardinal O’Connor and other well-known priests in St. Patrick’s Cathedral on the feast day of the Immaculate Conception. I think that is the most poignant one I ever assisted.

Conversions to Catholicism among high-profile politicians like Sam Brownback and Tony Blair are rare, but they do happen. In your experience, what are some of the factors that draw these people to the Catholic Church?

Well, it’s the work of the Holy Spirit some way or the other. For example, Tony Blair was married to a Catholic woman and I’m sure that had a big impact on him, even though I wasn’t personally involved there. It was the same in many of the people I helped. Robert Novak was married to a woman who was thinking about becoming a Catholic and converted just a week before he did. Judge Robert Bork was married to a woman who was a former nun, a wonderful woman. As you get older, if you don’t have a strong faith or if you have doubts, you start to think about being on the right side when life ends.

For a Catholic priest, what do you believe are some essential qualities or skills for instructing someone who wants to be Catholic?

Openness to listening, listening and listening. Also, praying for the persons you’re dealing with. And it’s important to know the right books or ways of showing them gradually the beauty of the church in all its various ways. Patience is very important.

You were on Wall Street before joining the seminary and getting ordained in 1981. Have any of your Wall Street skills helped you in your priestly ministry?

Probably. I know how to sell and that’s what other people say about me. I have a book—Good News, Bad News—where a lot of people talk about their conversions in terms of what I said or did not say to them. I can’t speak for them. But yes, for whatever reason, I think my background helped me with them.

You’ve studied and written a lot about Hilaire Belloc, the early 20th-century French-English Catholic writer whose prodigious output includes everything from economics to fiction. Why is Belloc still relevant today?

He’s relevant because he’s one of the last great men of the West and he was a man who saw the beauty of Christianity in its truest sense, which was Catholicism from his perspective. He wrote about it with verve, joy, fun and depth. Belloc influenced G.K. Chesterton’s conversion. He was a man’s man, a man with gusto who was a sailor and historian, wrote over 100 books. He was a great punster and poet who wrote children’s stuff. He was just a joy.

You’ve been working in spiritual direction and pastoral ministry in Chicago and California for the past 10 years. How would you describe your approach to pastoral and spiritual ministry?

I’ve written about this on my website, but everyone’s called to have a spiritual director or guide, including myself. We all need someone who helps us in our journey to Christ and the next life. So that’s my basic approach in three decades or more of priesthood. As a priest of Opus Dei, I have a certain spirituality of the laity. But the question is what people take from direction, the question of their freedom to take out of it what they can, and not of what the director says. That’s why I say on my business card that I’m a “spiritual consultant,” not a guru.

I have a great respect and love for the Jesuits, for the work they’ve done and will do in the future, and I’m really grateful to be able to share these thoughts here.

Sean Salai
Show Comments (
3
)
Comments are automatically closed two weeks after an article's initial publication. See our comments policy for more.
Frank Gibbons
7 years 5 months ago
Thank you to America and to Brother Sean Salai for this wonderful series of interviews of other voices from other rooms. This is a commendable work of unity and charity. I have one "request" -- how about Father Joseph Koterski, S.J.? A good man.
Sean Salai, S.J.
7 years 5 months ago

Thanks for reading and for the request.

Egberto Bermudez
7 years 5 months ago
Comment Thank you for this excellent interview, and for our ongoing conversion, I would recommend these three articles by Fr. McCloskey: A Catholic Lifetime Reading Plan (Over one hundred essential Catholic books.) Spiritual Reading for a Lifetime Featured Article (Our commitment to spiritual reading will make us "fishers of men.") The Seven Daily Habits of Holy Apostolic People Featured Article (Ways to achieve holiness and bring others to Christ.) Another great resource for Spiritual Reading is "The Catholic Lifetime Reading Plan" by Fr. John A. Hardon, S.J.