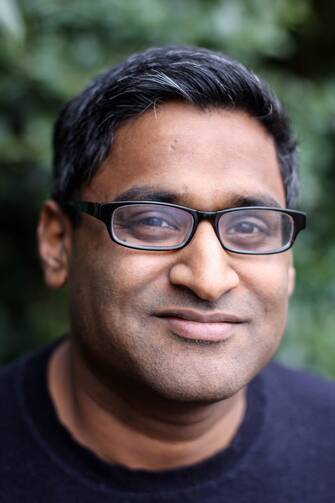 Ramesh Ponnuru is a Washington, D.C.-based columnist for Bloomberg View, a visiting fellow at the American Enterprise Institute and a senior editor for National Review magazine. He is a regular contributor to Time magazine and WashingtonPost.com. His writing has also appeared in The New York Times, The Washington Post, The Wall Street Journal, Financial Times, Newsday, New York Post, The Weekly Standard, Policy Review, The New Republic and First Things. He specializes in constitutionalism, conservative health care policy and conservative economic policy. Mr. Ponnuru holds a B.A. in history from Princeton University.

In 2004, Mr. Ponnuru and his wife April converted to Catholicism. On July 8, I interviewed Mr. Ponnuru by telephone about the intersection between his faith and his politics. The following transcript has been edited for clarity and length.

What drew you to the Catholic Church?

Well, it was a long and slow process. I loitered at the gate and I suppose I’m not fully aware of all the reasons that worked on me, but certainly the church’s strong defense of life was a factor. The lower-case catholicity of the church also impressed me as a young man. The church was home to a multiplicity of peoples, cultures and ways of life. There were many ways of being a Catholic. I didn’t see that everywhere else.

Well, one of the great things about being Catholic is that you can have all of the saints as your role models. There are certainly some Catholics I’ve known in my own life who have influenced me and served as examples—Robert P. George at Princeton and Kate O’Beirne, my longtime co-worker at National Review, being among them. I picked St. Francis Xavier as my confirmation saint. The idea of going out into hostile territory—because you’re convinced that this is the truth and this is what you’re called to do, proclaiming it and gaining a foothold for the church—is something I find pretty awe-inspiring. The fact that Xavier went to India adds a special meaning for me because of my own background.

How has your faith evolved or changed over the past 10 years since you converted?

Well, I like to think I’m continually growing in it. I can’t think of any particular changes in terms of things I used to do and now I don’t. And it would be hard for me to distinguish how my faith has changed me from how fatherhood has changed me—my wife and I had our first child just a year after we were received into the church. Our daughters are now nine and three. Being a newcomer to the faith and at the same time introducing it to my children has been a great experience. My older daughter can experience this faith in a way that I didn’t. I had to come to it on my own after a long process, whereas she is starting out with Catholicism as a given.

How does Catholicism influence your approach to being a husband and father?

In all the roles I play, I try to think about the right way to fulfill the duties I have to God and to the people who are in relationships with me. You know, I’m constantly praying for help so I can discern what to do and have the strength to do it.

I pray every night and every morning, and at Mass. It’s funny the things that stick with you. I often think back to an episode of “Everybody Loves Raymond” where Raymond asks Debra what she gets out of church. And she says that every week she thanks God for another week with him and the kids—and then asks God for the strength to get through another week with him and the kids!

I just pray the basics. I don’t pray the rosary often enough, but I say Our Fathers and Hail Marys. Those are my mainstays. I’m one of those mediocre Catholics that Evelyn Waugh talked about. There’s also a prayer my Lutheran mother taught me—Psalm 100—that I pray in thanksgiving to God. I thank God for a very long list of blessings that I’ve received: my health, my family, their health, being able to provide for them, being in this country, and being brought into the church.

You have been a staunch political conservative since your days at Princeton. Where do you feel the most congruence between Catholicism and your politics?

I would say that Catholicism has made me a little softer in my politics. Since becoming Christian, I’ve tried harder to be charitable, deleting first drafts that aren’t charitable. I don’t know if I always succeed, but I didn’t do much of that at all before my conversion. I think Catholicism influences a lot of what I do. You know, I don’t think there’s a Catholic answer to the way tax policies should be. But I do think that the flourishing of families is a very important focus of my politics, and that does influence the way I come at everything from taxes and higher education to health care and the life issues. It has also changed my position on the death penalty. I do think opposition to the death penalty is rationally correct, but I don’t think it would be my position if I hadn’t become a Catholic. I was pro-life with respect to abortion before I became a Catholic, but I was not pro-life with respect to the death penalty. With that aside, I don’t think it’s changed many of my positions, but it’s changed the way I think about a number of issues.

Where do you feel the most tension between your faith and politics?

The debate over enhanced interrogation and torture that took place during the Bush years was very difficult for me, because I took seriously the idea that we have to reject consequentialism and affirm human dignity. And the church teaching on torture was a very clear no. But it didn’t seem to offer much by way of explaining the scope of this principle, providing the sort of useful definitions that would have helped me. So that’s one area where I don’t think I ever quite reached a satisfactory answer. I was able to reject some answers, like the idea that the ticking time-bomb scenario justifies absolutely everything. The church teaching provided a useful orientation and starting point, but didn’t quite bring me to a conclusion about what things can be done. The government does have a duty to protect people, so it’s not a case where you can safely say just err on the side of doing less. But the church provides the answers it can provide, and sometimes intellectual developments await the fullness of time.

As I mentioned earlier, Catholicism would not be better at being Catholicism if it offered you an answer to what the top marginal tax rate should be. To give another example, how does one move forward on the right to life? Church teaching gives you the right goals, but it doesn’t really tell you what the right political and cultural strategies should be in particular instances.

On what current political issues do the church and American conservatives find themselves most clearly aligned?

Oh, I’d say the right to life, specifically the more than a million abortions every year.

On what current political issues do the church and American conservatives find themselves most clearly divided?

The death penalty is one, although I suppose it’s a question because there is a debate about the definitiveness of church teaching on it. Certainly the Republican Party and most American conservatives aren’t in line with “Evangelium Vitae” on that issue. Immigration is another area of tension. As I read the Catechism of the Catholic Church, I don’t think it tells you what to do on immigration, but some conservatives seem only to pay lip service to the idea that illegal immigrants are fellow human beings made in the image of God. And some of them don’t even do that.

What are your thoughts on Pope Francis?

It’s really interesting and inspiring to have a pope for the first time in a long time whose background is not academic—which is not by any means to slight the academic backgrounds of the previous two popes. He’s not an academic and he’s not a part of the Vatican diplomatic corps either, so it’s a new kind of pope in modern times and I think everyone is adjusting to it. I would like to hope that the fact that liberals seem to respond to Francis better than Benedict will lead more of them into the church or into a fuller communion with the church. I hope that’s the case. I don’t know if it will be, but I hope Francis will lead them to reconsider their faith or deepen their faith if they’re already in the church. I think the downside of a pope without an academic background is that occasionally when he’s talking about political or policy issues, he can speak in a loose way that I find sometimes unhelpful.

Any predictions for the future of our country?

I leave that to higher authorities!

Sean Salai
Show Comments (
1
)
Comments are automatically closed two weeks after an article's initial publication. See our comments policy for more.
Joshua DeCuir
7 years 6 months ago
VERY nice to see America following through on the editorial stance taken by the new Editor-in-Chief! Kudos to them! And before the ideologues come rushing in - Ponnuru has been one of the vanguard policy wonks attempting to re-engineer a Republican agenda focused on the economic problems of the lower middle class - wage stagnation, high health costs, etc. He is decidedly anti-libertarian, & has been critical both of Paul Ryan's rhetoric with respect to Ayn Rand & his tax "reform". So we can skip all the "He's just another Randian libertarian in sheep's clothing" stuff.